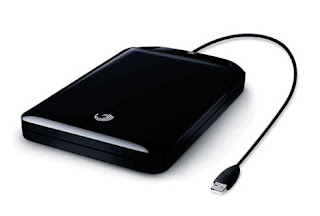 An aging computer can be brought back to life with an external USB hard drive like this 500 MB Seagate Goflex, which is less than $100, sometimes far less.


Old Dell laptops never die, it seems.  They really over-engineered them.  But the hard drives most come with are very small, and after you load a few programs or any serious amount of music on them, well, they are pretty darn well full.  Compressing the drive might save space, but it slows down the computer considerably.

One good stopgap solution for an older machine - and a good way to backup and transfer files to another computer are these Seagate USB hard drives, which your local office supply store will have for anywhere from $50 to $100 each.

Once plugged into your USB port, the computer usually recognizes them and assigns them the next available drive letter (usually E: or F:) and you can transfer data to them using the Windows COPY command.

Seagate loads these drives with "backup" software, but I usually don't use this, and in fact disable it.  It automatically runs on an AUTORUN program when you plug in the drive.  You can disable this by renaming the AUTORUN.BAT program to another name (X_AUTORUN.BAT) which won't run, but can be re-enabled simply by renaming the program back to AUTORUN.BAT later on.

Backup programs are fine and all, but personally, I'd rather back up each file individually.  When a computer crashes, the last thing you want to do is restore the hard drive to the pre-crash configuration, viruses and all.  And sometimes a new, "clean" install of Windows is the best thing going.

My old Dell laptop soldiers on.  I use it for traveling, and it is very robust and durable.  Since it runs XP, it doesn't crash all the time, and since it doesn't have an nVidia graphics card, it doesn't overheat.  Boy, those were the days, weren't they?  And those computers really were durable.

UPDATE:  The price of these things continues to free-fall.  A terabyte of data - once considered an impossible amount of storage - can be had for $100 or often less.  There is no excuse not to back up all your important files, multiple times, often.    If you are hit with a "ransomware" or other attack, at least you can tell them to fuck off, reformat your hard drive and re-install your programs and data.