A Double-Dip for the Recession? Or Just Fear? 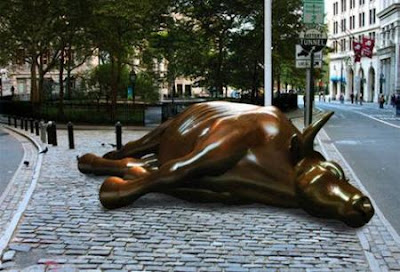 There is talk among many people that the stock market may dip yet again.  What is going on here?  Real quantitative analysis or just selling more fear?

As I noted in a recent posting on the aptly named Motley Fool, you can't go wrong selling fear.  The fool uses a simple trick designed to get Rubes to buy in.  It is like the old joke, "How do you keep an idiot in suspense?"

In the case of the Motley Fool, it is like the "One Trick to the Tiny Belly! Click Here for More Info!" but of course they never really give you the "info" - just a pitch to sell you a diet plan, or a subscription to their financial advice.

And if their financial advice was any good, they'd shut up and invest according to it and make money - and not tell YOU.  You never sell the goose that lays the golden eggs.  But regular geese that you can pass off as laying golden eggs - they are for sale all the time.

Their gambit was "The Great Sell-Off of 2011!" and with a lot of large fonts and exclamation points!!! told you how that it would all go horribly wrong, unless you followed their advice.  How convenient for them.  And people believe this shit, too.

But I have heard rumblings from others about a "double dip" in the recession, mostly from people who also are "birthers" (and still are, as of course the Birth Certificate disclosed today is a clear forgery, right?) so you have to take that sort of thing with a grain of salt.

Online, there are a number of blog sites pushing this - but also pushing right-wing agendas, or trying to sell you gold.  So those we can take with a grain of salt.  But what about real, quantitative analysis?

There is not much out there.  Or, like the end-of-the-world doom-and-gloom predictors, their predictions have expired without the doom-and-gloom occurring.

For example, this Wall Street Journal article (WSJ of course, now being part of the right-wing Newscorp Empire) talks gloom-and-doom sure to happen on January 1st when the Bush tax cuts expire.  Nice theory, but the tax cuts were renewed.  So strike that one.

This article from "Seeking Alpha" (which I have found to be a horseshit blog, for the most part) similarly predict gloom-and-doom, in vague terms, using emotional language and very little in the way of hard numbers.  The thrust of the article is a credentialist argument.  The opinions of "Karl Miller" an oil and gas guru, are that the world will end shortly.  They helpfully provide a link to his Linked-In page, in case you never heard of him.  Oh, look, he's "friended" Warren Buffet!

This article on Yahoo News! appears to be little more than an opinion blog piece that at least attempts to cite some hard data.  The author claims that the "downgrading" of US debt will trigger a recession, even though he admits, it is still AAA+ rated.  He also cites increased claims for jobless benefits - a slight rise last week as the trigger for this downfall.   Probably the most credible factor, however, is the increase in food and energy costs.

So.... are we headed for a "double dip recession" or not?  Well, from what I can see, I am not hearing anyone with any sort real hard numbers and a logically consistent argument saying this - just a lot of opinion pieces or fluff pieces or people trying to stoke fear for political or financial gain.  All all of these are suspect sources for hard, financial data.

The rise in energy prices and gasoline prices is troubling, as is the prospect of inflation.  The fed has been buying back its debt in an attempt to stimulate inflation, a move that I receive with trepidation.  As someone with money in the bank, inflation does not bode well for me.

The recent spike in gas prices is not unexpected to me - and if you read my blog, you will see what I mean.  Many folks barely remember the $5 a gallon gas that occurred before the last Presidential election - and most don't understand why that happened, and perhaps we still do not.  Oil was cheap then, but refinery capacity and pipeline capacity was limited.

This time around, it seems that oil prices are to blame - the unrest in the Middle East, particularly Libya, contributing to a reduction in oil output - with Libya being a major supplier and supplies being cut off.  If the war there ends quickly, this could be a short-term disruption.  A long protracted war, on the other hand, could result in long-term high energy costs.

Probably not.  As we saw in the last recession, trying to time the peaks and valleys is nearly impossible.  Those who "sold it all" in January of 2009 are hurting now.  Those of us who stayed the course (such as myself) made out pretty well.

The problem with this type of market prediction is that even if you could predict the movement of the market with any certainty, it is hard to know where to put your investments for safekeeping.  If you put your money into "Safe" government-backed bonds, they won't earn very much - and if your prediction about the market is wrong, you'll end up losing all that gain you would have had by staying in.

So, once again, all you really can do is diversify your portfolio.  Don't own all of one thing.  Buy stocks, bonds, Real Estate, Life Insurance, CDs, Money Market, FDIC-insured savings - and of course, pay down and pay off, debt.

If you do this, you don't have to try to predict the movement of the market, which is about as hard as predicting which slot machine will pay off next.  Simply stated, you can't.  And you will lose your shirt trying.

But if you diversify your portfolio, at the very least, you spread your risk and thus ameliorate any downturns.

But that leaves the question:  Who are these gloom-and-doom predictors?  As I noted, I heard this from a "birther" the other day - the sort of person who hates Obama, not of course, because he is black, but because he is Kenyan (and there is a difference, right?).  Those sort of people want to hear bad news - to WALLOW in it, just as some far-left liberals like to hear bad news as well (ironically, some of the same rumors are sold to both parties, with just the names changed.  The fabled Urban Legend of "Marshal Law" signs in the back of a wrecked Wal-Mart truck was used when both Clinton and Bush were in power).

These sort of folks have nothing invested in their 401(k) or IRA so they like to run down the market all the time to self-justify their spending it all on a car.  Think I'm kidding?  I'm not.

I've seen people comment on sites that it is better to "lease a car now, so when you are old, you'll have all those great memories about the great stuff you had" which sounds moronic, because it is moronic.

But again, people will use any excuse to self-justify bad behavior, and people who spend it all and don't save will argue that there is no point in saving as the market will just tank, hyper-inflation will wipe out your savings, or the trilateral commission will declare marshal law and put us all on the "Amero".

Nice theories, but it doesn't make buying a Jet Ski a better proposition.  When you are old and retired, a burnt-out 20-year-old Jet Ski isn't going to put food on your table.  Stocks may be risky, but buying shit is just squandering money - you are guaranteed that most all the crap you buy in life will eventually be worth far less than you paid for it.

So, unless I see something more concrete, I am not sure that I am going to change my investment plans that dramatically.  Not just yet.

Note: When I first wrote this, I made a typo and used the term "qualitative" in the caption, when I meant to say "quantitative" and of course, there is a difference.  Words matter.  This link explains the difference between the two.  Most of the arguments for a "double dip" are qualitative (emotional) not quantitative (mathematical)
Newer Post Older Post Home