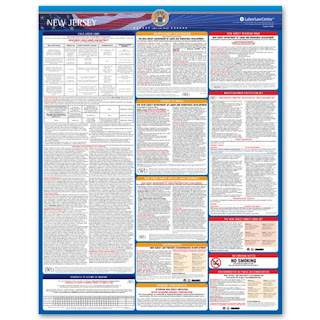 When you open a business, you are supposed to hang up one of these posters.


When I opened my own business, I obtained one of those posters you are supposed to put up in your workplace.  Back then, the poster had two sections.  One side said, "Discrimination on the basis of SEX is against the law!" and the other side side "Mandatory minimum WAGES are as follows..."

The words SEX and WAGES were both in large fonts, so from 10 feet away, it looked like the poster said "SEX WAGES" which I thought was pretty funny.

But at the bottom of the poster was some fine print along the lines of "Failure to post this poster prominently in a work area can result in fines of ten billion dollars and the Department of Labor cutting off your testicles with a rusty hacksaw" - or something to that effect.

And there was no shortage of companies out there willing to play upon your FEARS of the government, in this regard, offering to sell you "labor poster subscription services" for $100 a year - to send you a new poster every time some legislator or bureaucrat got a bee in his bonnet and decided that the poster needed to be changed to advise people that they are entitled to a bathroom break or some such nonsense.

It was then that I realized that being an employer was no Swiss Picnic, and I decided to get out of the game.

As an employer, you are not just hiring someone and paying them money for work.  And that alone is hard enough to do.   Hiring people is a difficult thing to do, as many people simply don't want to work, or do the least amount of work they have to, to get by, if they don't in fact end up causing you more headaches and work along the line.  And of course, they want to be paid handsomely and think that you are making out like a bandit - which is often not the case.

But on top of all that, you are expected to be the tax man as well.  You have to collect taxes from their paychecks and pay it to the government, filling out a lot of forms in the process.  Plus, you have to DOUBLE their Social Security and Medicare taxes, so for every dollar you pay a person, it costs you like $1.10.

The staggering amount of paperwork involved in this alone is enough to sink many a small business, so, like the poster paranoia people, companies have sprung up to help you out with "doing payroll" - often for some pretty steep fees.  ADP and others will "run payroll" for you, play the float and issue nicely printed paychecks for your employees - and file all those returns with the government.  It is all make-work, of course, and it adds to your overhead even more.

Oh, but wait, there's more.  Of course, you have to pay people a minimum wage, and of course you can't discriminate on the basis of sex or race.  Not only that, you might have to go out and recruit minorities and women, and advance them through your organization, ahead of other, more qualified candidates, lest you be accused of discrimination.  You might not be inclined to discriminate, of course, but you may find it hard to find people with the right qualifications that come in the correct colors and genders to make up a rainbow.  But nevertheless, you are expected to make up for the underlying racism and sexism in our society.  And if you don't - you'll get your ass sued.

It gets better.  You can't discriminate against someone of Hispanic descent.  But you'd better make sure all your employees are legal immigrants or have a green card!  Again, the penalties for failing to do so are enormous.  The government can't or won't enforce immigration laws.  They can't correct discrimination.  They cannot collect taxes.  So you, the employer, are expected to fulfill all these social justice deals.

And somewhere along the way, you are expected to run a business and make money.

But before you do that, you'd better make sure you provide health care and a retirement plan for your employees.  Why it is your responsibility to see that they go to a doctor is beyond me, but there you have it.  More and more, you are inserting yourself into your employees lives - becoming their father figure and confessor - as well as Sugar Daddy.  The basic transaction of working an hour and getting paid gets diluted further and further.

But like any social program or tax incentive, there are sure to be unintended consequences, and in the case of U.S. Labor Laws, the consequences are many and devastating:

1.  Many companies, particularly those paying low-wage jobs, hire only part-time workers, to avoid some of the more onerous requirements of labor laws.  This provides a small "loophole" for places like Wal-Mart and other low-wage employers, to avoid paying onerous benefits.

2.  Many other companies are resorting to outside contractors, who are paid on a cash basis for their labors.  Why be an employer, when you can hire someone to work for you as a contractor?  In addition to reducing overhead, you can fire a contractor at will, if they don't work up to expectations.

3.  Many companies (and even the Government) are contracting out entire workforces.  You hire a contractor, pay them cash, and in return, they hire people and deal with all the messiness of being an employer.  Many school districts have done this with their bus garages, firing "Old Gus" and the rest of the guys in the garage, and the bus drivers, and hiring "First Student" or some other bus company in their place.  Gus goes to work for "First Student" but for less money.  Was this what Liberals wanted or the Government intended?  Well, its what you got.  Hope you're happy!

4.  Many Jobs are Simply Going Overseas:  In addition to the high cost of labor in this country, the high cost of being an employer is making "outsourcing" very attractive.  The hassle of being an employer in the USA is simply too much for many companies, and it is far easier to just hire people overseas, for a number of jobs.  Even with language barriers, shipping costs, communications costs, cultural differences, and time-zone changes (ain't that enough?) it is easier to hire Sanjay in Mumbai than to hire Lurleen in Ludowici.

5. The Staggering Cost of Employment Stifles Small Companies:  Many larger companies don't mind all this regulation and paperwork so much.  They can afford to hire a "Human Resources Specialist" to manage this kind of stuff and also an in-house payroll department.  Since they are a large company, they can afford these costs.  The small company, however, has to contract much of this out, which in turn means they pay more per capita than the large company.  Thus, these onerous regulations act as a barrier to entry which keeps small companies out - or at least at a disadvantage.  Liberals love to bash "Multi-National Corporations" but at the same time push for onerous labor laws, not realizing that the same onerous regulations help the Multi-Nationals and hurt the little guy.

Think it never happens?  It happens all the time and I am treated to endless stories, usually from the "victims" themselves, about how they are victims of sexual discrimination, carpal-tunnel syndrome, or whatever.  And usually it is the victim themselves who tells me that they alleged sexual discrimination to get back at a boss they didn't like (or a co-worker) or the carpal-tunnel sufferer who shows me their photos of their recent canoe trip.  Frivolous lawsuits abound - and for the employer, hiring someone is not only a measure of finding a person who will work, but someone who will not actually cause trouble in the workplace.

And please, don't try to tell me that such suits don't exist or in fact, are not an epidemic.

It is unfortunate, but we live in a society where everyone has rights but no one has responsibilities.

Now, on top of all this, throw in UNEMPLOYMENT - the government's mandate that employers also fix the unemployment problem by providing unemployment insurance, and of course Workman's Comp - which is a neat idea, but also gets abused with great frequency.

The end for me came when I had to explain our firm's weapons policy to an employee - who decided to celebrate "bring your gun to work day".  At that point, I realized that I did not want to be an employer, now, never, or ever in the future.

So I closed my shop and became an independent contractor - which lowered my overhead and made my services more attractive to my clients.

Over the years, I have been approached by many people, usually young lawyers starting out - asking me for a job.  But it just wouldn't work.  Hiring even one person and paying them a steady paycheck would require a staggering amount of money, time, and labor.  And training that person and getting good work out of them would be problematic.

And of course, once they were trained, they would go to work for someone else - some larger firm who would pay more money.

But you try to explain that to a 20-something or to someone who has worked at a "Job" all their lives, and they give you a blank look.  "Gimme a Job!" they say, not realizing what it is they are asking.

Becoming an employer, however, had one reward.   While it was a financial fiasco for me, I did learn a lot about how the labor market actually works - and the real costs involved in being an employer.  I realized a lot of things, including the vast amount of weak thinking I was engaging in as an employee.  It gave me an appreciation as to how hard it is to hire people and to run a company.

No one has a "right" to a job - although the far-left pushes that agenda as well.  You can't force me to hire someone, particularly when you make it an expensive and odious proposition that would bankrupt me.

On the other hand, if hiring someone was easy to do and didn't require a lot of paperwork and nonsense, I'd be far more inclined to do that.

But that ain't about to happen, in my lifetime, anyway.....

It would be interesting to see how many jobs would be created if we had a law allowing small companies to hire people and just pay them in cash, like they would contractors.  Send out a 1099 at the end of the year and let the employee pay the taxes.  I would bet it would jump-start the economy.
Newer Post Older Post Home