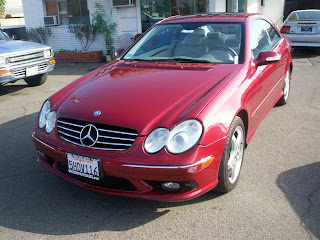 The car was a one-owner car and driven about 8,000 miles a year - about half the national average.  To own this car seven years, cost the original owner $36,000 in depreciation expenses along - about 62 cents a mile (yes, that is a lot).

And that is pretty good depreciation, compared to say, a Cadillac or other American car.  While European makes may depreciate 50% in five years, American cars do that in three.  But even a car that "holds its value" depreciates rapidly.  It only holds value compared to cars that hemorrhage in value.

My friend who bought the car had another Mercedes with 275,000 miles on the clock.  He would have kept driving it, but it was in a minor accident, and a car with that many miles on it isn't worth repairing - the repair costs exceeded the book value.  So he bought this red beauty above.  With any luck, he should get many miles of good service out of it - at a cost far less than the original owner paid.

That is a far cry from 62 cents!  And in terms of overall cost, it surely will be far less than the $36,000 the original owner spent - perhaps less than half.

And it is a really, really sharp car.  It looks and drives like new and with the 5.0 liter V-8, really hauls.  And yet, it costs less than even a stripped Corolla would new.  Which car would you buy?  For me, I think I would rather have a used Mercedes than a new anything else.

The answer, of course, is that they are sold "on time" and the people buying them feel they can "afford the payments".  So a car like the one shown above might be bought or leased for $500 to $700 a month, depending on the term of the lease or loan.  Of course, you have to pay for low-deductible collision insurance as well - but most folks don't factor that in.  But for many middle-class and upper-middle-class Americans, who are making mortgage payments of thousands of dollars a month, and bringing in the fabled "six figure income" - they feel that $700 a month is "no big deal" and moreover that they "Deserve a New Car" and "Don't Want To Deal with Repairs".

Those excuses are, of course, pretty specious, as the cost is very high to working people who should be saving for retirement.  The nice lady who owned this car was retired and living in Hilton Head, which is a pretty upscale place to live - and she lived there only half the year.  She could afford that kind of car, or at least I hope she could.   And she was smart to keep the car seven years, as opposed to trading in every 3-4 years as some folks do.  But geez, a garage-kept car with 58,000 miles on it?  Why get rid of it?

For you and me, working and saving for that fabled retirement that she is enjoying, well, $36,000 is a lot of money - a real lot.

Now granted, you'd still have to pay for a used car, but the key here is that when you continually buy new cars serially - trading in one after another every few years - you end up spending more than twice - perhaps four times as much, as simply buying a car like the one shown above, and then just keeping it a decade or more.

And as the example above shows, owning a used car does not mean driving around in some clapped out POS with mismatched paint on the doors.  You can have a very nice ride for not a lot of money - and far less than the cost of most new cars.

Now, exotic German cars are not for everyone, and even though they are cheap when compared to the cost new, they are still expensive compared to say, a Camry.

But the same idea applies to lesser cars, although the saving are greater.  For example, a new Camry will set you back just over $20,000.  But a late model low-mileage Camry would be 2/3 to 1/2 that price - and provide 100,000 miles or more of pretty reliable service.

And yet many poor people finance brand new "economy cars" - which are no economy when you consider how expensive they are new and how fast they depreciate.

Although we have sold off much of our automotive fleet over the last year (it was fun, but it was time to move on) our remaining cars are both a decade old.  But both look to provide years more of reliable service as well as well over 100,000 miles more of travel.  Why trade them in?

And of course, the reason why most people do trade in is Status, followed closely by Fear.  Status, of course, to show off a "new car" to the neighbors.  Of course, this is a false status, as a new beige Hyundai Sonata really isn't that impressive, at least to me.  And certainly not as impressive as the Mercedes shown above, which could be had for less money.

And of course, Fear is the other half.  This bizarre unfounded fear that a staggering repair bill will bankrupt you.  You can walk away from any car that needs more in repairs than the book value of the car is worth.  No one will force you to repair you old junker - you can junk it, as my friend did with his 275,000 mile car.

But people seem convinced (and salesmen will pander to this) that a perfectly good used car will suddenly explode and need a new engine - and they will desperately dump it in trade on something new and shiny, in order to allay that fear.

And ironically, with a new car, they will spend more time in the dealer service department, having warranty work done, than they would at the local garage, once the car is out of warranty.