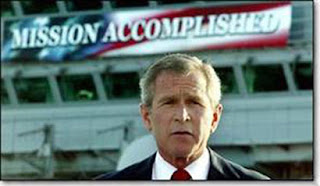 Could this idiot have been right about the Middle East?  Scary thought!
About a decade ago, Saudi Arabian terrorists headquartered in Afghanistan flew airplanes into the Pentagon and the World Trade Center and tried to fly a fourth into the Capitol.  In response, we invaded..... Iraq.

At the time, George Bush and the neo-cons said that removing the dictator Saddam Hussein and installing a Democracy would cause the people of the Arab world to rise up and overthrow their dictatorial governments and a new era of Peace and Democracy would flourish in the Middle East.

Ten years later, and, well, across the Arab world, people are, well.... rising up and overthrowing their dictatorial governments...

Of course, it remains to be seen exactly what sorts of governments will emerge in Egypt, Libya, Syria, Yemen, or Bahrain - or whether the popular uprisings will succeed or be crushed.

And of course, when Bush was talking about people rising up against their governments, he was hoping it would be Iran, not the countries whose Dictators we had either cozied up to or had in fact, installed.

It must have been embarrassing to Hillary Clinton to see people she was just talking to the week before, being overthrown.

And that is the interesting thing.  We had at least made peace or some sort of arrangements with most of these governments, which put us in the awkward position of wanting to support the overthrow of a dictator - while at the same time, having awkwardly supported or at least maintained relations with, the same dictator.

Compounding this problem is that it is not very clear who will prevail in the aftermath of these revolutions.  If the Dictator prevails, and crushes the opposition, he will be none too pleased with our support of that opposition.   It will be Saddam Hussein all over again.

And who is the opposition - or more succinctly, if they prevail, who will take over?  The Military?  The Muslim Brotherhood?  A Democracy?  Probability dictates that the latter is highly unlikely, given the history of the Middle East and the inherent weakness in Democratic movements.

But I wonder if perhaps Bush was right.  The nascent Democracy emerging in Iraq - at such a great cost in terms of human lives and money - may be an example to others in the region.  Once they see, firsthand how Dictators can topple - and how the alternative may not be so bad - they are motivated to create change.