The Geeks, the Jocks, and the Downfall of GM 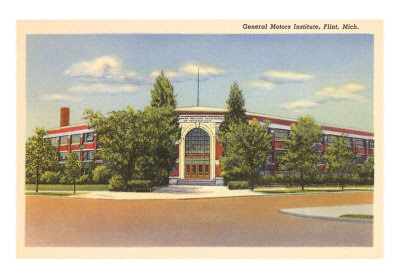 General Motors Institute was the breeding ground for the Engineering Geeks who later became managers of the Company.
A thought occurred to me the other day, thinking about the downfall of GM and all the nonsense that went on there, over the years.

GM had weak management - management that caved in to pressure from the UAW, out of fear of a strike.  As I noted in earlier posts, Union leaders were often amazed that GM management would cave in to some demands that even the Union didn't think were advisable.

So onerous work rules were allowed, a lucrative retirement and health insurance benefits were offered - but left under-funded - and a strike was avoided, at least for the time being.

And I got to thinking, why did GM not take a more aggressive stance against the UAW?  It tried in 1972, when the UAW went out on strike.  And GM blinked, and caved-in to the Union.

I think, in part, it may be due to culture - and GM's mistake in thinking that Engineers could be managers.

Engineers are geeks, let's face it.  When I was at GMI, we even had a Geek Honor Society called the "Robot Society" - sort of a Devo-version of Phi Betta Kappa.

So, GM promoted from within, and Engineers became managers.  But Geeks are not good managers.  They don't have the self-assurance and willpower to stand up to bullies.  And in school, they were probably bullied, too.

And who bullied them?  The Jocks, of course.  The D-level students who sat in the back of the classroom and upon graduation, went to work in the auto plant as assembly line workers.  And the strongest and meanest of the Jocks end up as Union leaders, of course.

So in every confrontation with the Unions, GM Management ends up re-living its collective high school nightmares, as the UAW leaders give management a collective wedgie and scrawl "Fag" on their locker.

This is, of course, a little tongue-in-cheek.  But I wonder, perhaps, if some of the Psychology isn't a bit true.  When I was at GM, management was scared to death of the Union.....