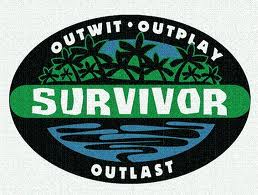 When the show " Survivor"  first came on, I thought it would be interesting to see how people survived on a desert island.  But it quickly turned into a popularity contest instead, and had little to do with actual surviving at anything.

If you like "Reality TeeVee" then I don't like you.  Sorry, but there you have it.  You are an idiot for watching that sort of drivel.  Actually, worse than an idiot, as you are the type of person who likes to listen in to other people's arguments, spread gossip, and constantly talk about your friends behind their back.  What's not to like?

When the first "reality" show came on the air in America (like everything else, being a slavish copy of some British TeeVee Show) I thought it would be interesting.  People stranded on a desert island!  How would they survive?  Finding water, getting food, living like Robinson Crusoe!  This might be interesting!

I mean, who hasn't thought about what it would be like to survive on a desert island?  Right?  That's why there are so many movies and television shows with this sort of theme.

But the show quickly turned out to be something else entirely.  Although pitched as this sort of "Swiss Family Robinson" kind of thing, it wasn't really about surviving on a desert island at all.

Instead, it was about exploring the nastiest and most unpleasant part of human nature - the part that makes you feel bad, but like a bloody SUV wreck, you can't look away from.

They interview these people and get them to say the nastiest sort of things about one another, behind each other's backs - or get them to start little cat-fights with each other.  It isn't pretty, and it really is not "entertainment" except to people who are depressed all the time.

Wait, what am I saying!  Chronic TeeVee watchers ARE ALL DEPRESSED ALL THE TIME!  And shows like this are one reason why.

So, they bitch and fight and argue, and we are supposed to think this is all so interesting and fascinating, and pick our "favorite" characters and become "fans" of the show, because our own pathetic little lives are so shallow and meaningless that watching some idiots like ourselves have a hissy fit on TeeVee passes for entertainment.

Uh, no.  I choose to opt-out of that.  And it was about then when I gave away my television.

The worst part was that the actual "Surviving" done on "Survivor" has little to do with finding grubs or cracking open a cocoanut.  Rather, they "vote people off the island" in a popularity contest that is so reminiscent of High School.

So, "surviving" on "Survivor" depends less on being a U.S. Army Ranger or even a Boy Scout who can make fire with two sticks, than on being devious and conniving to form alliances and boot others off.  So it is no surprise that the first guy to win was some pudgy Gay man. I mean, really, if you think about it.

Why is "Reality TeeVee" not real?  Well, the people who make it are up-front about this, like the Professional Wrestling folks.  They will gladly show you how the sausage is made, but if you chose to believe the cover story, they certainly won't disabuse you of the notion.

Come to think of it, most Religions are sort of the same way, aren't they?

I saw a "making of" documentary on these Reality shows, and it was interesting.  While there is no script in terms of actual dialogue, they do storyboard the shows to some extent, and then tell the actors (participants) what should happen in each scene, and then have them ad-lib the scene.  So instead of reading lines, they are making up as they go along.  But the outcome is preordained, and I suspect even the winners and losers are selected carefully to enhance ratings and increase viewership.

So, if you watch this drivel thinking that the people on the shows really mean what they are saying, and that they really dislike or like the other characters, you are just a massive fool - that's all.  And you are squandering your life in the process.

Worst of all, you can tell a person who watches this drivel by the way they act in their own lives.  Reality show fans are always trying to "vote off the island" some friend or acquaintance.  They view friendships as strategic alliances, to be made and broken in a heartbeat, so as to align themselves with the proper social group or set.

And worst of all, these sorts of people spend an inordinate amount of time talking trash about their friends behind their backs, spreading rumors, and just being Machiavellian and evil - but for no real purpose whatsoever.

And I have noted this phenomenon before - people ape what they see on TeeVee.  You can tell "sitcom people" by the way they act - always telling off-color jokes and using sexual innuendo and making depreciating "funny" comments about other people like it was a Hollywood Roast.  On the Tee-Vee, everyone laughs (or a machine does, anyway) and it is all so funny!  Why does it fall flat in real life?

It does because running down your friends constantly, even in jest, gets to be old after a while.  And talking about the flaws in others behind their backs gets to be old quickly as well.  And yes, we all do this to some extent, but it never makes us happy or feel good about ourselves.  In fact, after a "bitch session" like that, you tend to feel bad and washed out - and yet, we are drawn to this sort of thing like Moths to the flame.

It is bad enough that there is something in our brains that triggers this odious behavior.  Reality TeeVee celebrates this sort of behavior.

And I think it is not by accident, either.  Depressed people watch TeeVee, and this sort of programming is depressing.  And it plays to the compulsive-addictive nature in all of us - the need to feel bad, to talk trash, to do things against our own best interests.

And this is the sort of behavior the advertisers want.  After all, depressed people do make excellent consumers - they over-spend on credit cards and finance everything on time.  You can sell then salty take-out pizzas and neighborhood chain restaurants.  You can sell them the idea of leasing a shiny new SUV for "low low payments".  In short, you can sell them nearly anything.

Because the part of the brain that is triggered by this need to engage in (or watch) the odious side of human nature is closely related to poor financial habits and spending.  And the TeeVee is finely crafted to appeal to both - with flashy graphics and loud noises and everything else designed to distract and cater to your short attention span and lowest common denominator behavior.

You can't just watch "a little TeeVee" either - it is like a bad drug.  It reminds me of a guy who once tried to convince me that you could have a "responsible meth habit" - he was just lying to himself (and yes, I quickly distanced myself from him!).

If you read the stuff I have written in this blog, you might think "well, there are some ideas here that might be useful" and then try to select from them, cafeteria style.  But I beg to differ.  Being fiscally responsible isn't a matter of doing a few things - it is doing all the things.

So just pull the plug on TeeVee.  If you want entertainment, rent a movie or read a book.  Flopping down in front of the "tube" and watching Reality Drivel is just going to insure that you end up as superficial and stupid as the people on those shows.