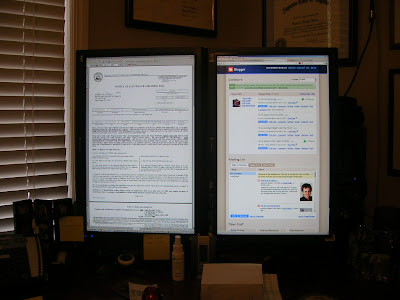 Dual Displays, as large as possible, eliminate the need for paper.  Here is a setup with two 24" flat panels in portrait mode.

As I noted in my Death of Paper and Death of Mail postings, you can get online, almost any document, in better and easier to use format than by paper.

BUT, and this is the key, you have to be able to see it.  And the DISPLAY is one place where people "go cheap" on a computer when they should be spending the most.

If you think about it, your main interface with a computer is the keyboard, mouse, and displays.  And yet people go cheap on these items, concentrating instead on processor speed, memory, and hard drive space.

And yet as I noted in my Cheap Multimedia Computer posting, you can use an hoary old Dell for multimedia movie downloading just fine.

And how many of you have used up even 1/4 of a One Terabyte hard drive?  We have more than enough memory, processor speed, and storage.

But displays - well, most folks have the smallest and cheapest possible.  And this is a shame, because display technology has dropped dramatically in price in the last few years.  Heck, you can use a 42" LCD television as a computer display, for about $450 at BJ's wholesale.

A Canadian Patent Attorney turned me on to dual displays.  Windows will display them, and a graphics card such as an nVidia will drive them.  You can move windows from display to display, just by "grabbing" and moving them with the mouse.  And in each display, you can put a window as "full screen".

Note how in both cases, since the displays are in portrait mode (which may require rotational software, if you want to rotate a lot, or you can configure permanently in windows) you can see an entire page of a document at once - NO SCROLLING UP AND DOWN needed to read.

This is essential to using a computer, as otherwise, it becomes so frustrating to read documents online that you end up "printing out" a document to read it, and waste a lot of paper as a result.

And of course, with two apps on different screens, you can cut and paste from one app to another.

Microsoft WORD even allows you to display two documents in "full screen" mode in separate screens, at the same time, which is nice for comparing two documents or reading one and editing another.

For your next computer, seriously consider the largest displays possible and dual displays.  It will improve you productivity, reduce the need for paper documents, and bring you into the 21st Century.
Newer Post Older Post Home