The Marketplace is a Battlefield! 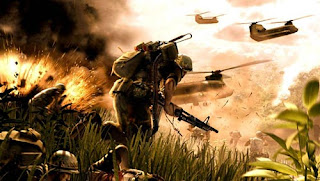 The Marketplace is no place for Pattycake!


One misconception that I think many people have - or at least I know I had - was the fantasy of the marketplace as this happy-go-lucky place where people struck fair bargains and everyone went home happy at the end of the day.

And perhaps I got this impression from Adam Smith, who blathered on about the "invisible hand" of the marketplace, finding the best price for both buyer and seller, and who also argued about the rationality of the market.

And while his ideas were revolutionary for the time, we are finding out today that human psychology is anything but rational, and that markets can be distorted - and are distorted regularly - so that one person or group of persons makes out financially, at the expense of vast groups of others.

The Marketplace is a Battlefield!

And it doesn't matter if it is the new car dealer (or worse, used car dealer) or the kindly local grocer.  Whatever the transaction you are involved in, people are out to get the most that they can for themselves, particularly, it seems, nowadays.

So yes, you will be persuaded to take on crummy deals on onerous terms that are not the "best price" for you as the buyer.  Many folks simply give up and raise the white flag of surrender and say "just sell me something and don't make it hurt too much".   And then end up living as P.O.W.s.

Or even if they try to do battle, the merchant has set an ambush for the buyer - oftentimes so subtle that the buyer thinks they are winning, when in fact, they lost the minute they set foot inside the store.

Frequent shopper clubs, coupons, discounts, sales, airline miles, and other fake financial acumen are usually the bait used for the trap.  The consumer thinks he is outwitting the retailer, but in fact, he is following a worn path through the jungle, where he will hit a trip-wire and end up falling into a pit lined with punji-sticks (25% interest rate credit cards) or the like.

And in many cases, we come back from such ambushes, battle-scarred and wounded, bleeding financially, without realizing it.  We crow about our victory over the enemy - how we "put one over" on the new car dealer or how we got "70% off" on a new dress that we otherwise had no intention of buying.

It's like Vietnam all over again.  We declare ourselves the winner and go home.  Only the real scoreboard - your net worth, tells a different tale.

And this is an ugly and unpleasant truth for most of us.  We have to fight, day in, day out, to preserve what little wealth we've managed to accumulate.  Every day, some smart guy, somewhere, comes up with some new scheme to separate us from our money.  And 9 times out of 10, most of us fall for it.

So how do you put on your body armor and gird yourself for battle?  The first and best way is to choose not to fight.  Be a Pacifist - or at least an anti-materialist.  If you walk away from a battle, you can't be killed or wounded.   So, in other words, don't go out and buy crap - particularly crap you don't need.  Choose your battles wisely and then fight them with vigor.  Squandering your energy trying to get a bargain on a Jet Ski is just asking for an ambush.  Just walk away from deals like that entirely - when you can.

And when you do have to fight a battle, be vigilant.  Keep a keen eye out for enemy movement.  He may feint in one direction to distract you, while making an aggressive move in another.  And while complicated battle tactics might seem to be the answer, usually the head-on attack, using all your strength, is the best option.  In other words, seek out simple, direct deals where you exchange cash for goods or services.  The more complicated you make a financial transaction, the more likely your opponent will win.

And never let your guard down, ever.  The moment you do, they sense your weakness and strike.

And beware of enemy propaganda - the television.  They will brainwash you into believing anything - even to betray your own side - your own family!  What they are selling is not in your best interests!

You will lose many a battle, that is true.  But one battle does not mean the war.  And even when you are wiped out, you can pick yourself up and dust yourself off and go roaring back into battle - even to re-fight the same battle.

And it is a battle worth winning, at all costs.  Because the prize is your own financial freedom, which is the same thing as your own personal freedom.  And if you lose, well, the other side takes you as hostage - as a slave - to be sent to the mines to chisel away at a perpetual mountain of debt for the rest of your life.

There is good news, of course.  If we band together, look out for each other and warn each other of impending attacks, we can fight and win.  And I've got your back.

But beware, there are traitors among us - people who say they want to help you out and provide you with battle plans - but they are battle plans drawn up by the enemy, designed to drive you straight into an ambush.  And these Financial Gurus, who promise you easy victory, merely sell you out to the other side, all for a few pieces of gold, or perhaps some click-through revenue.

And in wartime, we know what the penalty for traitors is!