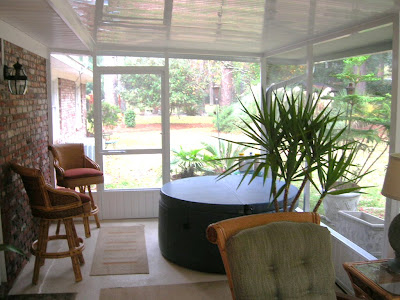 Our Soft Tub has been a real bargain and has worked well for over four years now.
In writing my Hot Tubs on a Budget article, I mentioned in passing the option of the Soft Tub.  We have had one for four years, now, purchased used on Craigslist, for $300, and it arguably has been the best hot tub we have had.
New, these sell for about $3000 retail, although I see them re-manufactured (re-lined) on eBay for about $1750.  So $300 is quite a bargain - don't expect to find that.
The fellow we bought it from was a piece of work - he had a house that was a perpetual remodeling project, two very expensive ($70,000 plus) boats in the front yard, three cars, and a lot of junk in his house - new and still in the packaging, or all busted up.  The place was a mess.  And he was in a lot of debt.  Typical American - unhappy.
He unloaded the soft tub because he thought it was broken.  He filled it with water, plugged it in, and when it didn't instantly become hot, he assumed it was broken.  But all hot tubs take hours to heat to temperature - usually overnight - and the Soft Tub is no exception.  If he had bothered to go online to their website and download the user's manual, he would have known that.
What makes a Soft Tub unique and arguably better than a regular hot tub?

1.  It is generally cheaper than a standard hot tub.
2.  It requires no professional installation.  Set it down on a level surface and plug it in.
3.  It runs on 110V, so no electrician or 220V power is required.
4.  It uses little energy - using waste heat from the pump motor to heat the tub - and thus costs less to own.
5.  It is smaller than a huge hot tub, so it takes up less room and looks more attractive.
6.  It has digital controls, including a digital temperature readout.
7.  It needs far fewer chemicals and thus saves on chemical costs.
8.  It uses far less water than a regular tub, so you can afford to drain it more often.
9.  Since it is portable and user-installed, you could put it on the patio of a rental property and take it with you when you leave.
10.  One or two people can easily lift it.  You can carry it home on the roof of your car (strap it properly, use cardboard to shim, see the Soft Tub site for strapping instructions!).

Are there downsides to a Soft Tub?  Yes, some, but not as many as you'd think:

1.  They are smaller than a standard hot tub, so you can't put 6 of your friends in there.
2.  They don't have a lot of benches, seats, or other fancy, but unnecessary features.
3.  They don't have "hydro-massage" jets and tons of water jets (usually just 4 or 5) so you don't get a "hydro-massage" from it.
4.  It does have a vinyl liner that will eventually wear out, and if you over-chemical the tub, it will stain.  A new tub has to be carefully filled to prevent wrinkles.

But the advantages far outweigh the disadvantages.  As I noted in my original posting on hot tubs, what we found to be the best thing about a hot tub was that it was a container filled with hot water.  The idea that you would get a "hydro-massage" was very overstated.  You just want to sit in hot water, Japanese-Style, with all the pumps and motors OFF.
And if you have back aches and the like, sitting in the "hot bucket" can be very relaxing and helpful.  And it is very useful for that.
So long as you carefully follow the instructions and don't over-chlorinate the tub, it should provide many years of good service.
Would I buy one again?  I hope I don't have to - that the one I have will last many years, and that I can simply re-line it or have it re-lined when the time comes.  But if I was in the market for a Soft Tub, I would look for a used one, or perhaps one of the re-manufactured ones.   I would consider buying one new, but would try to talk down the dealer on the price.
The model we have is the smallest model - the Softub 140.  It works well for one or two people, although in one moment of madness, we squeezed four in (do not attempt, it will basically force all the water out of the tub!).  But for two people, it works just fine.
As you can imagine, it is not often I endorse a product, but I have to say, I am impressed with the clever engineering of the Soft Tub as well as the ease of use of it.  If you are looking for an easy-to-use and easy-to-install hot tub on a budget, this is a very good option.
UPDATE:  After many years, the vinyl liner started to wrinkle and crack and the motor seized.  I could re-skin the tub for about $1500 and buy a new pump assembly for $300 but that was pretty close to the cost of a new tub. It was made in 2002, so it lasted nearly two decades.
We ended up buying a roto-molded hard-sided "plug and play" tub to replace it, which so far has worked out well.  Cheaper than a Softub (new) and no vinyl to deal with.  I will write an updated entry on that.
Newer Post Older Post Home