Why Listening to the Idiot Media Makes You an Idiot. 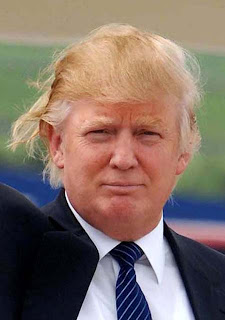 According to the Idiot Media, this guy is the front-runner for the 2012 GOP Nomination.  Are you still certain that watching TeeVee keeps you " Informed"  ?

Trump, Trump, Trump, Trump.  The idiot media is having a field day with this guy - who is basically an actor playing a rich guy on TeeVee.  Trump lost most of his major assets several bankruptcies ago, and now basically is little more than a brand name and a television personality.  Not a bad gig, but hardly Warren Buffet territory.

Today on CNN there are no fewer than 5 stories and opinion pieces about Trump.  And of course, there is the inevitable piece about the media obsessing about Trump - the media reporting on its favorite topic, itself.

On NPR even, supposedly the bastion of impartial reporting (do you really believe that?) they do pieces on Trump.  And one piece was about a survey of name recognition of GOP candidates, which at this time, are sort of an anonymous group of nobodies (like that fellow Obama was, 4 years ago) and a couple of celebrities - Trump and whatsername - you know, big titty lady.  Palin.  That's it.

And they report this, as if name recognition was the same thing as political support, which it isn't.  And in a way, it is circular reporting.  The media hypes the snot out of Trump, and then reports that no one can remember the names of any of the other candidates.  Maybe, (just me being crazy here) the reason none of the other candidates are memorable is that the media just keeps hyping Trump, because, well, as a polarizing figure, he generates ratings.

You see, news people don't leave the office any more to get news.  So what they report as "news" is little more than water cooler gossip in the newsroom.  And what they do report has to be sensation and attract eyeballs, so they can sell them to the advertisers.  A news program with poor ratings but good reporting will not stay on the air longer.

Much ado was made of Fox News obtaining trademark protection on the phrase "Fair and Balanced".  But the joke really was that in the description of "goods and services" accompanying that application, they listed "Entertainment, in the form of News Reporting" or some such.  Entertainment.  Think about that for a second.

You are basing your factual interpretation of the world on what the purveyors even admit is just an Entertainment.

And you have the balls to look down your nose as me as being "uninformed" because I don't watch 4.6 hours of that drivel.

Television is not enlightening.  It is not factual.  It is not educational - even Sesame Street, which just teaches rote memorization and self-esteem, not critical thinking.

And maybe right there is the key - critical thinking.  Television teaches passivity and victimhood.  It teaches depression and consumption.  It teaches inaction.  You are a spectator, not a participant.  You watch, but don't do.  You have an opinion, that "counts" - but little more.

Consider Donald Trump.  He is a television clown, nothing more.  The idea that he is "Presidential Timber" is of course, ludicrous.  He has never held elected office or even ran for anything.  His "Birther" platform is idiotic and appeals only to a small minority of bomb-building Americans.  It is a joke.  And we all know that - or at least we should.

But the idiot media treats it seriously and hypes it and hypes it and then wonders why we are all talking about it.  They are manipulating us, plain and simple.  And when you go to work Monday Morning and sit around the water cooler and say "What about that Donald Trump?", well, you've been manipulated.

I use him here as a very obvious example of the sort of shenanigans that the idiot media uses.  But it is just a more egregious example.  I could pick something from the "last newscycle" or the next one.  They do it all the time.

Unplug from the idiot media.  They have nothing to say to us, other than gossip, rumor-mongering and celebrity news.  They want us to be star-struck idiots, willing to do whatever they say.  And they don't want us to think for ourselves.

And yes, I harp upon this a lot in this blog.  But it is the KEY to happiness and self-actualization and also the single hardest thing for many people to do.

If you came here looking for an idiot media kind of story about clipping coupons or getting flyer miles (both examples of bogus faux financial acumen), well, sorry.  That sort of drivel is the "smart savings!" that the idiot media hypes - and all it is, is an incentive for more consumption.

You have to do the whole thing, not just part of it - you can't pick and choose, cafeteria style from sound financial planning.  And the key to starting is to reclaim 4.6 hours a day of your LIFE back, and chuck that evil presence in your life, known as television.