The Great American Way of Death! 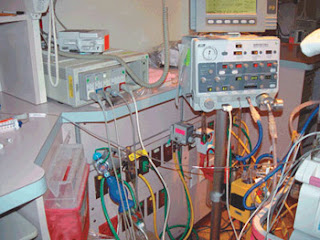 Dying in a hospital, hooked up to machines, staring at florescent lights and counting the dots in the ceiling tiles - that is no way to go!  And it is an expensive way to go as well.

Americans have a problem with Death.  They all think it is an awful thing that "but for" some intervening cause, would not happen to anyone.  That is the attitude in our country - that we can cheat death with medicine, or a pill, or a secret of eternal life.

But the reality is, death is what gives meaning to life - deep meaning - and it is something we should embrace and rejoice in, as odd as that sounds.  Because eternal life would be boring, if not physically impossible.  And our religions teach us this - that death brings meaning to life - and that we have a finite amount of  time here, and we had better make the best use of it.


Perhaps it is the television - Americans watch so much of it - that keeps us thinking as small children, afraid of death, afraid of life, really.

But it is inevitable, and unfortunately, in America, it can be very unpleasant, if you let the medical community take over your life.

A friend of mine died the other day.  He was older and in bad health and it was inevitable he would die, as it is for all of us.  He did little to take care of himself, to be sure.  But when the time came, the ambulance rushed him to the hospital, where they hooked him to machines for a week, while they decided whether or not he should die.  I only hope he did not suffer.

Not only is such a death messy, uncomfortable, and unnecessary, it is also expensive.  Doctors hook you up to machines on the premise that all life is sacred, and that no sacrifice is too great to keep someone alive, even for a minute longer.  But the reality is, this type of end-of-life scenario is wildly profitable for the hospital, who can charge medicare tens of thousands of dollars.

I had another friend, much younger, who was diagnosed with Pancreatic Cancer.  It had metastasized to much of his body and the prognosis was not good.  He spend the last months of his life going from doctor to doctor, from hospital to hospital, getting chemo, getting radiation, until he died on a stainless steel table, all alone among strangers.  I am not sure that was the way he wanted to go, as he was the kind of guy who loved to go out in his sport fishing boat and have a good party.

But it is hard to tell how we would handle such situations.  When you are told there is a 3% chance you will survive, you grasp that thread as a lifeline and grab onto it.  And I have another friend who was told that - and he grabbed and he lived.  So it is a hard call to make.  Desperately seek extreme medical procedures?  Or just stay home and get drunk?

End of life care ends up being a big chunk of our medicare budget, and of course, no matter how much money you throw at an 85-year-old with emphysema and congestive heart failure, the result is about the same.

My late Mother took the other approach.  Rather than seek out extensive medical care, she went into hospice care, made herself as comfortable as possible, and then died.  I am not sure that is the answer, either, as she intentionally forgo-ed treatments that could have extended her life for years and would have made her far more comfortable - simple diet and exercise changes, for example.

But she died at home, in bed, just like "the good old days" in America, as opposed to some overheated intensive care ward with monitors and beeping machines, and interns and nurses trying desperately to save her "one last time" instead of just letting her go.

But of course, as the last election demonstrated, in America, such talk is heresy.  Rationally discussion end-of-life issues will get you branded as promoting "Death Panels" by idiots such as Sarah Palin.  And the far right, for some reason, thinks that a natural death is somehow evil or not part of the "culture of life".

But I am not sure how extending the life of a terminally ill person by a few hours, days, or weeks, at great cost and at great discomfort to the person involved, is celebrating "Life" at all, and is not, in fact, a macabre sort of death-worshiping horror show.

UPDATE:  This article on CNN says the religious will spend more money trying to stay desperately alive.  This makes no sense to me.  If Jesus is waiting for you on the other side, and  Gad is saying it is your time, why artificially defy the will of God?  Perhaps they secretly know they are going to the fiery place for being massive hypocrites?
Newer Post Older Post Home