The Merging Accident - Keeping your eyes in the direction of travel! 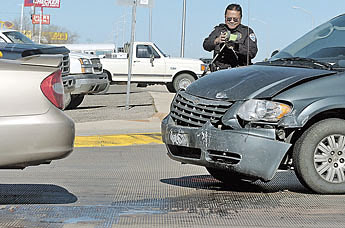 You are generally at-fault when you rear-end someone.  When merging, this is easy to do, if you forget to watch where the car is going and look over your shoulder instead.

When I was about 20 years old, I rear-ended a lady in a brand-new Chevy Monte Carlo.  Yea, I know, no great loss, there.  But I was at-fault, and the reason was that I was practicing a form of driving taught to me by my Brother, which turned out to be a really bad idea.

Always look in the direction of travel!

And nowhere is this more important than merging.

It is tempting, when merging, to "look over your shoulder" and see if the way is clear to merge.  And this is what my Brother taught me.

The problem with this technique is, if there is a car ahead of you and for some idiotic reason, they decide to STOP, well, you basically will rear-end them.  It is inevitable.

And this is what happened to me.  I was merging onto a traffic circle, and I looked over my shoulder to see if it was clear to merge onto the circle.  The lady ahead of me in the new Monte Carlo had pulled away, and I assumed she had driven off.

I assumed wrong.  New to the area, she panicked in the traffic circle and thought she was lost.  So she decided to do something totally and utterly idiotic.

She stopped dead in the traffic circle.  Dead Stop.  Diagonally across two lanes.  While she read a map.

BAM!  I slammed right into the back of her car.  And even though she was being an idiot for stopping, it was "my fault" for not watching where I was going.  That is the law, and it is also common sense.

Watch where you are going - look in the direction of travel!

But, you say, how do you see if it is clear to merge in?

Well, the key is to not tailgate someone on a merge lane.  Give them plenty of room.  And watch THEM to make sure they have merged and are driving away, before you glance over your shoulder.

And glance - don't gaze.  The mistake I made was to turn my head to see if I could merge, and then leave my head turned, while judging the distance of the traffic in the circle.  In that few seconds, the lady ahead of me STOPPED to get out her map, and well, BAM!  we collided.

Note that driving DEFENSIVELY means expecting that people BEHIND you will do stupid things like tailgate you on an on-ramp.  When you see this, make sure you don't stop suddenly.  Yea, it might be "the other guy's fault" and all, but on the other hand, it will likely inconvenience you for hours at a time, and insurance never makes you whole when it is all said and done.  It is better to avoid an accident than to be "right".

I learned my lesson back then during that merging accident.  Watch where the car is going, and don't let your mind get two steps ahead of what is going on.

My partner got into a similar accident with the old Taurus, many years ago.  Fortunately, the damage was slight.  He was at a right turn lane, and the light was red.  The lady ahead of him made a right-on-red.  Well, she seemed like she was going to make such a turn, as she started to pull away.

Thinking ahead, he looked to the left to see if it was clear for him to make the turn as well, and suddenly BAM!  He read-ends the lady ahead.  She stopped in a panic, for one reason or another, thinking that a car was in her lane and she could not make the turn.  And my partner rolled right into her.  A 2-mph collision at best, but with modern SUVs and their tinny bumpers, it ended up costing hundreds of dollars in repairs, if not thousands.

Look in the direction of travel - NEVER ASSUME that the fellow ahead of you has driven off, until you see them DOWN THE ROAD.  It is a simple step to take that will insure that you NEVER get into such accidents.

And if you can do one simple thing that completely avoids an accident, why not do it?
Newer Post Older Post Home