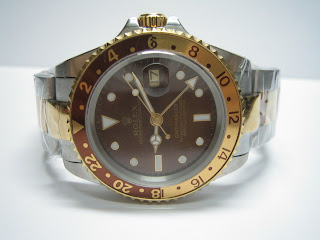 Not a day goes by that you don't get a SPAM e-mail advertising fake Rolex watches.  Why do people buy these and are they a good deal?  Not really.

When I was in my 20's, I was in New York City and a guy comes up to me and offers to sell me a Rolex Watch for $20.  I started laughing at him, and then I thought, "Well, it is just a cheap Chinese-made watch, faked up to look like a Rolex, and I pay $20 for cheap Chinese watches as it is!".

So I talked him down to $15 and bought it.  It lasted a few years until the battery wore out and at that point I chucked it out.  The plating started coming off pretty quickly, and also I realized, pretty quickly, that you can spot a fake Rolex from 100 yards away.  But it was an interesting experiment, and it worked as well as some cheap Wal-Mart watches I have bought over the years, for about the same price.

Watches and status are an interesting thing.  I've never bought into the concept of the $5000 watch, although some people do - as they want to impress others with their apparent status and wealth.  And the expensive watch is sort of an inside signal to others "in the know" that you can afford a Rolex or Breitling or whatever.

The other day at the Golf Course, we met two older gentlemen playing golf, and the one fellow says to my partner, "Say, is that a Breitling?" - referring to my partner's $20 Wal-Mart watch.  It made me feel sorry for the people at Breitling, but illustrates why status watches are so silly.

Like so many other things, consumer-grade goods are often a far better value.  Generic battery-powered quartz crystal watches are accurate to within seconds a year - often far more accurate than the primitive mechanical movements of so-called status watches.  And if you drop one over the side of your boat, you won't even dive after it.  It is just a cheap watch, and you can buy another.  In fact, for the price of a $5000 status watch, you can buy 250 cheaper watches, or about about enough to buy a new watch every three months for your entire life.

In a way, it is like the Grand Turbo grill - the $3000 gas grill.  Nice and fancy, but for the price you can own a lot of "disposable" consumer-grade appliances that will last you a lifetime and are a lot less hassle.

Today, I hardly wear a watch at all.  When I do, it is an aging old "Swiss Army" watch with a band I bought in Taos at a local silversmith.  Hardly a status item, but it does tell the time.

But we all succumb to status, it seems, even the famous anti-materialists out there, who of course are just a bunch of hypocrites by pretending that they don't crave status. 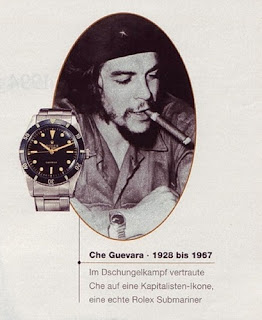 Yes, even Che Guevara wore a Rolex watch, which is now in the CIA museum in Langley, Virginia.
Newer Post Older Post Home