Can you really save money with Coupons? Sort of... 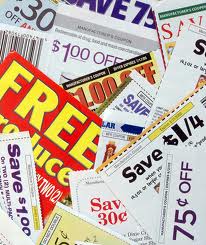 Can you really buy thousands of dollars of food for $50?  Not exactly....
The idiot media loves a good coupon story.  And when the economy is "bad" they trot these out with regularity.  And supposedly there is even a TeeVee show about this, called "extreme couponing."

And yes, the idiot media has been running these stories since 1978 and probably before.  I remember this being "news" back then, during the last major recession, when food became expensive and gas was sold on even and odd days.

What is all this about?  And are you missing boat on All Those Great Savings!!!! and Free Food!!! ?

No, not really and let me explain why.

Yes, in theory, it is possible to go online and get coupons, clip them from the paper, from magazines, and the like.  You can make a hobby of it, and if you become astute at this, you can get some relatively good deals.

But in the celebrated stories in the media and on the TeeVee shows, what happens usually is that they interview a couponer who cashes in a whole bunch of coupons at once - selectively buying things for which they only have coupons, with "manufacturer's coupons" being the holy grail of them all.

And yes, during these "stunt buys" you can end up getting lots of free food or even getting money back.  It can happen.  With regularity?  Not really.  And not without a staggering amount of work.

Yes, like so much else in life, they aren't handing out free money this week at the bank.  To really become a serious couponer, you have to haunt websites, download coupons, nag manufacturers, clip coupons from flyers, newspapers, magazines, and the like.

In other words, it is work, and the more you do of it, the more you can save.  But don't think that the "extreme" couponing they show on TeeVee or in newspaper articles is something that just anyone can do, all the time.

This is not to say you shouldn't look into coupons.  But be careful.  A lot of couponing sites out there want to harvest more than demographic data.  Some want you to sign up for services in exchange for coupons.  There is no coupon in the world worth that....
Newer Post Older Post Home