Using a Cell Phone as a Land Line 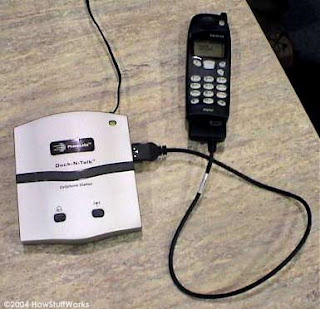 A simple docking station, such as this dock-and-talk, usually available for under $100 online, can connect your cellphone to your landlines at home, eliminating the need for an extra $60 a month phone line.

Back in the day, every family had a phone.  Sometimes this was literally one phone in the house, perhaps a second in the parent's bedroom.  These were old dial or touchtone monsters, which, if you can find them today, still work after 50 years or more.

Phone service cost maybe $10 to $25 a month, and long distance calls were billed by the eaches - and were expensive! Some folks pared this expense even further by having a "party line" - essentially sharing the phone line with neighbors.  This is where "Ident-a-ring" came into being - each neighbor had a distinctive ring.

And back then, when you called, it had better be damn well important, and you let the phone ring 10 times, so that people could put down what they were doing, walk to the phone (not run) and answer it.  No VoiceMail!  Today, when I see this in old movies, I get nervous.  "Answer the phone, dammit!  Before it bounces to VoiceMail!"

And it goes without saying that we had no caller ID.

Today, many folks are struggling with multiple bills for telecommunications services.  They may have a land-line, cable service, DSL Internet (or cable modem) and of course a cell phone with texting plan.  Combined, these may total hundreds of dollars a month.

For example, a simple cell phone plan could be $60 to $80 a month, without fancy texting or data features.  Throw in a "family plan" with texting, and you are over $100 a month without difficulty.

Cable Television, which I think is the work of Satan (or Satellite TeeVee, same thing) can run anywhere from $60 to $100 a month - or more!  One good way to save money is to just turn off this drivel.

DSL Internet service, or cable modem can run an additional $30 to $50 a month on your basic service, depending on provider.

If you have all of these services, you could be paying $200 to $300 a month in telecom bills - enough to buy a nice secondhand Camry.  Or put another way, if put in your 401(k) would equal over  MILLION DOLLARS at retirement if invested over your working life.

Is a cell phone worth a MILLION DOLLARS to you?  Well, think about it, because that is what this telecom nonsense is costing you, over your lifetime.

But for many people, the idea of paying for both a cell phone AND a land line seems, well, kind of a con job.  And young people learn quickly in college that land lines are not really necessary to their lives, as they live out of their cell phones, anyway.    So many folks are "unplugging" from land lines these days, and the real growth is in cell phones.

And since the pay phone has died in the last decade, you kind of need to have a cell phone these days.  If your car breaks down or you need to make a call in the city, well, there are no pay phones to make calls with.  You have to use your cell phone.  You NEED a cell phone.

Granted, there are ways to have a cell phone and not pay much for it.  I have been using AT&T GoPhone, which has cost me, in the last two months, $2.90.  That's right less month than you'd pay for coffee at Starbucks, for two month's service.  Of course, this means I spoke for a total of 29 minutes - I don't yak a lot on the phone.

But before then, this was a problem multiplied by two.  I had two homes and thus the cost of two landlines was running me over $150 a month, sometimes closer to $200 a month.  And we rarely used the landlines, too.  You can, in some places, put your phone service on hiatus while you are gone, and save that $50 a month (usually they charge a minimum $10 to $15 fee to keep the number in your name and play a recording).  But even then, there is a cost, and a hassle of having two phone numbers.

A docking station is one answer.  This allows you to use your cellphone as a portal into your home phones.  The Dock-n-talk shown above is what I use.  Other stations are fancier, actually receiving the phone in a cradle.  It is not hard to hook up and it is easy to use.  The diagram below illustrates how it works. 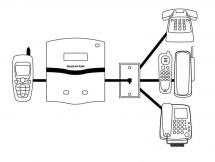 Once you plug the cell phone into the docking station, your house phones can now make and receive calls through your cell phone.  It takes seconds to hook up.  You plug the dock-n-talk into a phone line in your house, and then plug the cell phone into the dock-n-talk.  The only tricky part is to go to the network interface box outside your home and then open the "consumer" access door and unplug the phone company phone line (otherwise, you are driving a phone signal back up the line and Ma Bell doesn't like that).

The dock-n-talk generates a fake dialtone and from the user point of view, it is "transparent" - you'd never know you were on a cell phone, unless perhaps it drops a call.  And the system will work with any phone, except an old dial phone.  And actually, those will work, you just can't dial out.

Since it is a cellular phone connection, however, things like ATM swipe machines, alarm systems, and computer modems might have problems.

So why use this instead of just answering your cell phone?  Well, it is convenient, when you are at home, not to have to run around the house looking for the cell phone, to answer it, before it bounces to VoiceMail - or to look for it whenever you want to make a call.  It allows you and your guests to have a "phone line" (or a second phone line) without having a phone line.

But suppose you have crappy cell service where you live?  Well the folks at Digital Antenna or at Wilson Antenna have the answer, in the form of the cellular telephone amplifier.

As I noted in an earlier posting on cell phones and brain cancer, handheld cell phones put out a half a watt of power (500 milliWatts, which sounds safer).  Traditional car phones had up to about 5 watts of power.  The reason for the reduction was safety - putting a radio antenna against your head is considered unsafe.  But for some reason, 500 milliWatts was thought to be safer.  If you believe that, fine.

But what this means, is, legally, you are allowed to go to about 5 watts (3 to 4.5 watts for most amplifiers) on your cell phone.  And a cell phone amplifier is the way to do it.  The picture below is for a Digital Antenna dual band model: 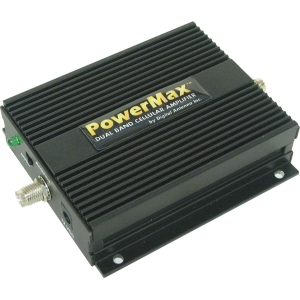 These are also available online for about $100 or less.  I have three.  They work great in your car, and also your boat.  For cars and boats, they allow you to talk with less dropped call, better signal strength in fringe areas, and for a boat, when offshore.

Of course, you will need an antenna.  I have a magnetic mount antenna I have used with my car and also at my house (on a steel roof or on the air conditioner).  Today, I have a flat plate directional antenna mounted on my roof.  It also was about $100 or so.  And we get five bars of service. 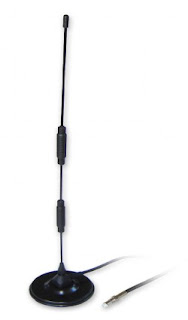 A simple magnetic mount antenna works well, but you can get fancier if you want to.


So for about $300, or the cost of six month's of land line service, you can buy this sort of equipment and have a "landline phone" using your cell phone.  When you leave home, you can unplug the phone from the system (being sure to shut off the amplifier) and take the phone with you (plugging it into the amplifier in your car, if you want to).  It works pretty well.

Today, I still have this equipment, although only one home.  I use the cell phone as a second phone line, as I have a landline for my DSL service.  The equipment is pretty robust and is still working pretty well after six years.

Of course, since we don't yak on the cell phone anymore, we use a GoPhone plan for that - 10 cents a minute, which sounds expensive until you realize that most cell phone plans cost 14 cents a minute, and that's only if you use all your minutes!  So overall, we have cut our phone costs to one landline, DSL, and the goPhone account.

The landline and DSL costs $80 a month, including Voicemail, and the GoPhone costs $100 a year for 1000 minutes.  So, overall, our total telecom bill is about $1060 a year, or less than $100 a month.  This is still more than I would like to spend, of course, but far less than the $200 to $300 many people pay for a land line, family cell plan with texting, and the ubiquitous Cable TeeVee.

Since I work from home, the cost of DSL and the phone can be deductible, at least in part.  And with the DSL, you can "watch" movies and even television shows, commercial-free, on a flat screen television hooked up to a computer monitor.

Beats the snot out of Cable!

UPDATE March 2015:   I recently upgraded my Dock 'n Talk to Bluetooth capability.  See this link for more information about this amazing company.

As for the cell phone amplifier, since I wrote this piece, the number of cell towers on this island (and indeed in most places) has gone from three to about thirty.   I no longer need the amplifier to get good cell service.