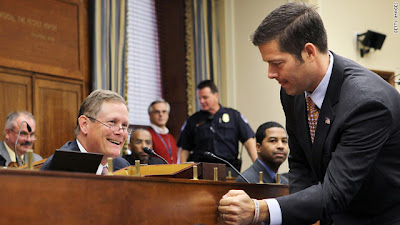 Congressman Sean Duffy claims to be living paycheck to paycheck on a mere $174,000 a year.  This is the guy who is going to teach the Dems fiscal responsibility?

"(CNN)–Wisconsin Democrats aren't pulling any punches, or punchlines, when it comes to recent comments made by freshman GOP Rep. Sean Duffy. Last week the congressman told a constituent that, although the annual salary for congressional members is $174,000, "I struggle to meet my bills right now."

"Duffy said "I guarantee most of you, I have more debt than all of you. With six kids, I still pay off my student loans. I still pay my mortgage. I drive a used minivan. If you think I'm living high off the hog, I've got one paycheck."

1.  This is the guy who was elected to Congress to balance the budget and push for "fiscal responsibility" and yet he can't even balance his own checkbook.

3.  There are a lot of Duffys in the USA today, who are making lots of money, and yet squandering it at the same time.

You can be sure that his kids probably all "had to have" cell phones with texting plans, lest they be mocked by the other students.  And of course, the thinking is, "Hey, I'm a Congressman (or fill in the blank with some other status job name) I can afford this!"

And I'd suspect he has Cable TeeVee at both his home in Wisconsin and in Washington DC.

As for debt, well first there is the issue of Student Loans - as I noted in that posting, many folks take out too many student loans and then when they graduate, refinance them over 30 years, creating a perpetual mortgage on their careers.  Borrow less and pay it off sooner.  But like Congressman Duffy, most of us don't understand the implications of such staggering debt when we are 18.  Maybe he will push for student loan reform?  As well as reforming these "for profit" universities that con the poor out of their money?  Oh, right, Republicans have no business in "regulating legitimate businesses".  I forgot.

Cars are another area where you can squander a lot of dough.  Congressman Duffy says he owns a "used minivan" - but all cars are "used" once you buy them.  Is he trying to suggest that he owns only one car?  Because I kind of doubt that.  What about their other car?  Probably a leased Mercedes.  And he has to have a car in DC, right?

But still, that leaves a lot of blank space to fill in for those "more debt than all of you".   Who does he owe money to?  I suspect, if he is like most Americans, it is probably a boatload of credit card debt.  Yes, even high-flying Washingtonian insiders end up bend over the barrel that is credit card debt.  I once met an executive from Fannie Mae who had $50,000 of intractable credit card debt and a toxic ARM loan on his house.  And we wonder why America can't seem to kick the debt habit?

I have a proposal for Congressman Duffy.  Let me look over your personal finances for a week or so, and I'll bet I can save you a boatload of money.  I could cut your costs on homeowners insurance, car insurance, and get rid of the Cable TeeVee and cell phones you kids are addicted to (and send them off to the library instead!).  And as for haircuts - well you could save $500 a year cutting your own, and let me tell you, it can't look any worse than what you've got right now.

Because, yea, I was living "paycheck to paycheck" on $174,000 a year, and it wasn't because the cost of living was that high - even with two homes to maintain.  It was because I let a lot of little things slip through the cracks and spend more than I made - not a lot in any one big chunk - but little bits, here and there, that added up to a lot of money over time - thousands, tens of thousands, hundreds of thousands of dollars!

It is unfortunate, though, that the Duffys of the world will continue to externalize their problems - and use the excuse that they are "Taxed Enough Already!" to self-justify their poor economic behavior.  And so long as they do that, no real change will occur in their personal lives or the way our government operates.

And P.S., if you are worried about the Duffys getting by in retirement, check out the retirement plans a Congressman gets.  He doesn't have to worry, trust me!
Newer Post Older Post Home