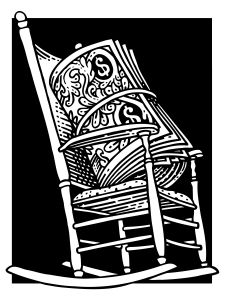 The 4% Rule works well for retirement planning, but may be a bit conservative according to some sources.  Let's crank some numbers and see why.
This Pop Economics blog has an interesting analysis of the 4% Rule.   As they note, with a 4% withdrawal rate in retirement, the "success rate" for retirees is close to 100% - nearly everyone using such a scenario will not run out of money before they die.  But it is a very conservative scenario, if inflation is low and returns on the stock market are high.
In my previous musings on this idea, I postulated a 2% Cost-of-living adjustment (inflation) annually, and a rate of return starting at a stock-market like 10% (risky) and declining over 40 years to nothing (reducing volatility risk as we get older).  In that Scenario, assuming we start with $1,000,000 and take out 4% per year (adjusted for inflation), we clearly are too conservative - not only do we not run out of money, we actually end up making money:

But assume we use the same rosy scenario with regard to interest rates, and postulate a 5% withdrawal rate (which some financial advisers, such as my Fidelity adviser, say is more realistic):

We still end up making money over time, although toward the end the amount starts to decrease.

At 7% and above, you tend to go negative.  Now this assumes a pretty rosy scenario - getting very high rates of return for the first 10-15 years, at a time in your life when you should be putting your money into "safe" investments.
Suppose we put our money into a long-term government t-bills or other fairly staid investments earning "only" 4% rate of return (which is pretty good these days!).  Things are not so rosy, although it will be 36 years (!!) before you run out of dough:

The problem here, of course, is that we are trying to solve a fairly complicated equation with a number of variables not within our control.  First, there is inflation (our COL or Cost of Living adjustment) which I am optimistically assuming is 2% in these scenarios, based on today's numbers.  At various times in the recent history of our country, inflation has raged to double-digits (such as in the late 1970's).
Taking our "rosy scenario" from the first example, and cranking the inflation number up to 5% we see that eventually we run out of dough over time:

Rate of return is not something you have control over either, unless you opt to go into a low-rate-of-return investment such as a bond, but even then, rates of return can be variable.
Of course, you do have some control over spending - you can decide to consume less - up to a point - or to consume more - up to the point of spending all of your money.
And I think one temptation in retirement - which I saw people do in the 2000's - was to spend more when the market makes more.  So when some retirees I know were getting 15% to 20% rates of return on risky stocks (which is not a very bright thing to do in retirement) they spend it like drunken sailors.  Then 2009 hit, and their volatile stocks took a hit.  And they wished that (a) they invested in more safe harbors and (b) they hadn't spent like drunken sailors.
You see, this is the flip-side of the problems facing the 401(k) generation - trying to save, get out of debt, and deciding where to invest are the hard parts during your working years - and you can mess it up pretty badly.  But the other half is how to spend it once you retire - at which point you can really squander years of hard work in very short order.
And compounding this, is the problem of sudden emergency needs for cash.  You wreck the car, or need an operation, or some other big ticket bill, such as a new roof for your house - and suddenly, one year, you need to spend $20,000 to $40,000 in one chunk.   You could finance the car, of course, but that just means you are paying more for the car to stretch the payments out over time.
And this illustrates why old people would rather just patch a roof than fix it - what the heck, if it outlives them, that's all they care about.
I guess the conclusion I come to is that the 4% rule is a good "rule of thumb" to use, as there are so many variables over time that you have no control over.  And I think it is still a good idea to find "safe harbors" for money as you get older, as you cannot afford a 50% dip in your portfolio value in one year, as we had in early 2009.
And I think most of all, avoid the temptation to spend more, just because your investments "do really well" during one particular year.
UPDATE 2022:  For some reason Blogger has pixellated my tables above!  Sorry about that!  One factor to consider in addition to all of the above is early retirement.   If you retire early, then 4% may not be too little but too much.   We are presently drawing at a 2% rate, which is balanced by gains at this point.  When we reach real "retirement age" we will likely draw at 4% or more.  But so far, 2% has been very comfortable for us - we are doing everything we want to do, in comfort, for not a lot of money.
Newer Post Older Post Home