If a Friend, Family Member has Hoarding Disorder... 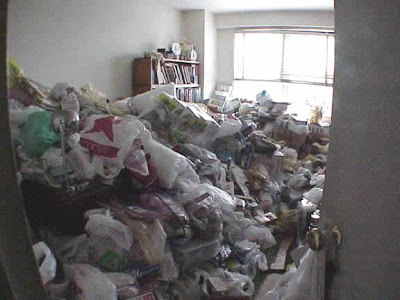 What do you do if a friend or family member's house looks like this?  Not much, it turns out.


As I noted in The Tragedy of Hoarding Disorder, this affliction is on the rise in America these days, for a number of reasons.

But the question remains, what do you do if a friend or family member has a house full of junk?

The only answer I have, is to back away slowly.

Experts say that Hoarding Disorder, which is still not fully understood, is one of the hardest disorders to treat.  It is viewed as a variation of Obsessive-Compulsive Disorder (OCD).  The problem is, the typical OCD sufferer knows they have a problem, while the Hoarder does not.

Cleaning out a hoarder's house is never the answer.  Their ability to acquire junk is staggering.  People have reported that, by the time they get back from the dump, the Hoarder has already started re-filling their house with crap.  It is a never-ending battle.  And a battle it is, as the hoarder will fight you - often physically - if you try to "help" them.  Save your energies for your own life.

In one situation, I saw a neighbor's house "cleaned out" by the local fire department, which removed tons of junk and placed it on the lawn, under tarps, to eliminate a "fire hazard."  The hoarder then re-filled the house with new junk, and the process was repeated a year or two later.

In many cases, there is no "cure" for the hoarder, only eventual death, and fire-sale of the property by the heirs, who clean out the house and throw everything in a dumpster.

But even then, the problem might not end there.  I am personally aware of two hoarding families where the patriarch died, leaving multiple houses filled with hoarded junk.  In both cases, the heirs initially tried to "clean out" these houses, but got bogged down in going through the junk, convincing themselves, over time, that the crap filling these houses was indeed "valuable collectibles".   Hoarding may be hereditary.

But the problem remains, what do you do if you know someone who is a hoarder?

If it was a "friend," I would find new friends.  Nothing is worth the hassle of befriending a hoarder.  Seriously.   They are mentally ill, and they will drag you down with their mental illness.  It is OK to admit that you are not equipped to deal with severely mentally ill people.   There is no profit in befriending the mentally ill - it is a one-way relationship.   You will give them all of your energy, and they will take, take, take.   The mentally ill are the most selfish people in the world - all you are is wallpaper to them.   Just walk away - for the sake of your own sanity.   And no, this is not up for discussion.

And if it is a family member, I am not sure whether my advice would be any different.  I know more than one person struggling to de-hoard a hoarding family member, with no results.  It is only when the family member dies or is institutionalized that they can even attack the pile of junk, which often takes months and months of efforts to clean out, and costs thousands in disposal fees and dumpster rentals.  And as noted above, often the process of "cleaning out" a hoarding family member's home leads to a transference of the hoarding.   Maybe there is some sort of toxic mold in that hoarded junk that spreads the disease.  Maybe it passes through the genes.

It all of that really worth it?  To clean up someone else's mess?

And of course, such efforts are squandered when the hoarder returns to the home and re-fills it with junk.

But then again, perhaps some people like to have a perpetual problem to complain about, an a hoarding relative is a good one.

But suppose the hoarder is your neighbor?  You can't just move away, as his hoarding is likely degrading the value of your home, as his unsightly lawn, covered with junk, is an eyesore.

We lived near a hoarder's house, and actually bought our home without realizing that a hoarder was accumulating junk nearby.   We merely thought the person was on vacation and forgot to mow their lawn.  It wasn't until after closing that we looked out our window and realized there was a tree growing through their house.  Eventually he died and the house was sold.   Problem solved.   In the interim, however, it would have been challenging to sell our house, with an abandoned hoarder house across the street.

As I noted before, I rented an apartment with a hoarder living upstairs - with junk piled up on his floor, three feet deep.  One of my investment condos had a hoarder in the building, who made the other resident's lives miserable.  This sort of thing is more common than you think - and quite annoying!

In that situation, it is hard to "walk away" from a hoarder, as they may live next door, and you are subject to their eyesore, plus possible smells and hazards (rats, vermin) particularly if they hoard pets.

In that situation, the only thing you can do is legal action.  Call your local County, State, or City authorities and find out what the options are, and take whatever actions you can.  Go through channels, don't try to confront the hoarder yourself.  They are unhinged people and often violent (although usually cowards).   The hoarder at the condo decided to "hoard" my parking space by repainting his apartment number on it.  He actually thought that this entitled him to two parking spaces (which no other owner had).   I contacted the condo board, and their solution was "just repaint the number yourself" which I did.   He tried to confront me and got very angry and threatened violence.   Fortunately for me, he was just plain crazy and not a gun nut (which is just hoarding disorder with guns).  But it could have been worse.

The other alternative, which is what we did, was wait them out.  Particularly of the hoarder is elderly (and most are, although I've seen hoarding strike people as young as 18) chances are, they will kick the bucket soon, and the problem will resolve itself.  Unless of course, the hoarding son moves in.

Hoarders, I think, can have a shorter life expectancy.  They often don't take care of themselves, visit doctors or the like, or even like having people in (they don't want others to "see their mess").  And as the house falls down around them, they resort to dangerous things like heating the house with the stove, or worse.  The hoarder at the condo died at about age 55.  I think hoarding tends to wear on your body and mind, and hoarders don't live very long as a result.

So far, outliving hoarders has been the only strategy that has worked, in my personal life.

So, as harsh as it may sound, waiting for them to DIE is probably the best option.  Trying to "help" a hoarder only serves to prolong the process, as you continually intervene in their lives, which in turn provides them with medical and other care, which in turn, improves their health, and allows them to return to their (now-cleaned-out) home, to hoard again.

Hoarders generally are vicious, angry people, too.  So don't expect them to take your actions to "cure" their hoarding lying down.  And legally, there is little you can do, in most jurisdictions, to get them to stop hoarding.  Ordinances to keep lawns mowed are often hard to enforce.  At best, you might get the County to mow their lawn for them, and perhaps eventually condemn the property (which means it will be boarded up) once it really starts to fall down.

But typically, as you read in the paper, the hoarder is only rousted once things have gotten really out of hand, and neighbors have suffered for years and years - and the smell is atrocious.

So you see, hoarders are not just "harmless kooks" but rather people who can make others lives miserable.

It is hard to feel sorry for them, frankly.

UPDATE:  May 23, 2011. This link describes some steps to take to stage a "Hoarding Intervention"  Good Luck with that!   I am not sure that "interventions" of any sort are of any use, other than to the intervenor, to make themselves feel better - and superior to others (the classic "I'm better than you because I care about others" gambit).

As I noted in another posting, my late Sister once told me that she had some vacation time coming up and wanted to use it to stage an Intervention for Mother's drinking problem.  I told her that was a weird idea for a vacation.

You see, it is romantic to think you can "save" people from their own folly.  But to a large extent, you cannot.    And spending considerable emotional and physical energy (as well as money) trying to "save" people is not going to really help your own situation much.

You see, the best thing you can do for society is not to stage "Interventions" to save others, but instead to get your own affairs in order so as not to be a burden to society yourself.  Judge not, lest ye be judged.  My Sister's intentions were good, but perhaps she should have spent that energy better in her personal life, which needed its own intervention - from herself.

My gut reaction is:  Walk away from hoarders, even if they are your family members or friends.  You won't change them one bit.  They don't think they have a problem.  And they will hate you for meddling in their affairs.  Trying to intervene with a hoarder is playing with loaded dynamite.

I have better things to do than try to "fix" alcoholics or hoarders.  And usually, they cannot be fixed anyway.  And some treatment centers are starting to realize this.  I recently read about a "wet" treatment center for alcoholics, and as perverse as it may sound, it makes sense.  If someone wants to drink themselves to death, why torture them with treatments and jail time and homelessness.  Just given them a small room and a tumbler and say "have at it - but don't annoy anyone else."  It ends up being cheaper and everyone is happier all the way around.

Maybe that sound hard-hearted, but to the alcoholic, it is actually a blessing.  The cycle of jail time, halfway houses, 12-step programs, and continual relapses, as well as the dangers of living on the streets, are utter agony compared to the underlying drinking problem itself.

With hoarders, the same is true. You can clean out their homes, but they just fill them back up.  They live in their own squalor until they die.  Few respond to treatment - if you can even get them to go.

If you can, walk away.  Run away!  Live and enjoy your own life, and stop trying to fix other people's problems!