Why do the poor get the rawest deals? 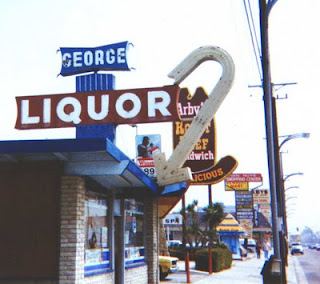 As a middle-class person, I can buy my booze at a wholesale club for far less than most urban liquor stores charge.  So why do poor people feel they have no alternatives?


The other day, we were in Jacksonville, Florida, which is a city that I think is under-appreciated.  It has its nice parts, really.  We were on our way to the BJ's wholesale club, which has a wine and beer department and a separate liquor store, with pretty fabulous prices.  On the way there was a sign for a "discount liquor store" and on a whim, we stopped in to see if their price on Belvedere Vodka was better than BJ's.

And it turned out to be an "urban" liquor store, with bars on the windows and bulletproof glass between the counter and the public.  You shouted out your order to the foreigner behind the glass, and he would fetch your pint and pass it through some contraption.  We quickly left.  Not only was it creepy, there were no bargains to be had.  Everything was more expensive than the retail store near our home.

We went on our way to the wholesale store, which was only two miles away.

That got me thinking.   One of the conundrums in life is why the poor pay more for basic services and products, while the rich pay far less.

Think about it.  In any "poor" neighborhood, there are stores that cater to the poor, often offering substandard products and services at astronomical prices

This seems the opposite of how things should be, doesn't it?  I mean, if you are poor -  and by that, I mean  you don't make a lot of money - you'd think you'd be searching out the best prices and best bargains, in order to make your limited income go further.

But in fact, the opposite is true.  And I think this illustrates the fundamental problem with the culture of poverty.  Poverty is not a matter of how much you make, but your mindset about spending.  When you are convinced that all you deserve is the rawest of deals and the worst sort of bargains, then you don't go out and look for better deals.

The poor are poor not just because of a lack of money, but a lack of appreciation of what money is, and how to spend it.

And this is one reason, I have less and less sympathy for the poor.  Very few poor people are poor by circumstance. Most are poor due to actions on their part.  And you can't educate them if you tried.

We had a cleaning lady clean my office, back in the day.  I would pay her every week by check.  I was chagrined to see the checks come back with my statement (banks used to do this) endorsed to a check cashing place.

I confronted her about this, and she said the check cashing store was a "good deal" as they charged only $25 to cash the check.  I was mystified.  She could have walked to the local branch of my bank, it was only three blocks away, and on the way to her bus stop.   But no, she said, banks are bad places, and they wouldn't cash the check for her without an account.

But I could never understand why she chose to make her life harder for herself than it needed to be.

And it makes me sad.  Sad for people caught up in this sort of trap, who feel they have such low worth in the world that they should take whatever bad bargain they can get.

But I am not sure I feel sorry for such folks.  After all, the answer to most of their problems are within their own control.  All they have to do is make different economic choices.  Drive 2 miles out of the ghetto and shop somewhere where there are no bars on the windows - for starters.