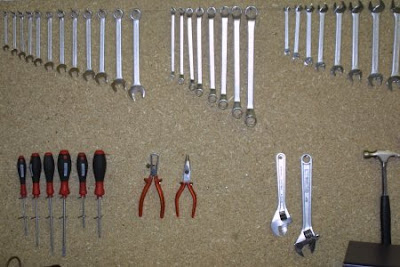 Organization can be a real time-saver and money-saver.  However, over-organizing can have the opposite effect.  Finding a happy medium is not easy!

Organizing your home, your office, or your workspace, is never easy.  It seems there is never time to get things the way you'd like them, as more pressing matters take precedence.

And right there is some aspect of human nature that is hard to put your finger on.  An office that is too messy and disorganized is a nightmare.  One that is over-organized and sterile is nice to look at, but chances are, not much work gets done there.

The same is true for the shop.  Having all your wrenches lined up in a row, like the example shown above, is nice.  But the reality is, you end up using about three or four of those wrenches all the time (like the 11mm and 13mm, or the 1/2" and 5/8") and use the others hardly at all.  So, organizing them by size like this looks cool, but really isn't functional.  If you work on cars a lot, you have three wrenches in your hands, most of the time.

You can spend a lot of time and money organizing, and sometimes, it is time and money not well spent.  As I noted in my closet organizer posting, people spend hundreds, if not thousands of dollars, organizing closets which hold maybe a few hundred dollars worth (resale value) in used clothes.

And I guess that is the first question to ask, when organizing - do I need to file this or store this or put it in a box and label it?  Or should I just throw it out?

And it is a relevant question.  In my lifetime, I have found that most of the items I "organized" in my basement, closets, and attic, were things I should have rightfully thrown away.  I put them in boxes, or file drawers, carefully organized and labeled and thought I was getting a lot done, when in fact, I was more like putting them in a tomb - their final resting place for all eternity.

Financial records from a decade ago are rarely needed (the IRS audits only 7 years back).  But I would spend countless hours organizing canceled checks.  To what end?

And many times, organizing things is just as good as throwing them away.  I once sorted all my car parts into plastic totes, labeled by car make and model.  I put them all on an impressive rack on the wall in my garage and then promptly forgot about them.

When I needed an oil filter for the M Roadster, I would go buy one, not realizing that I had one sitting in a tote in the garage.  Often, only years after selling a car, would I realize I had a tote of parts for it sitting in the garage.

Better off to sell old parts on eBay - or toss them - than to hoard them.  And better off to buy an oil filter when you need it, than to "stock up" for the future.

And that is the problem with closet organizers, garage organizers, and the like.  They create more and more cabinet space to store things, so you save more things. And you save so many things, you forget what it is you are saving - and end up either owning multiple copies of things, or just saving junk for years, without ever using it, before you throw it out.
Newer Post Older Post Home