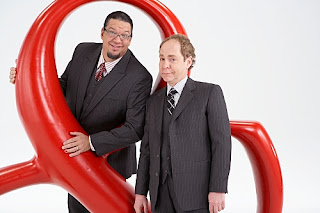 You can't debunk Bullshit with more Bullshit.  These two are sad.

I was watching Michael Moore Hates America on Netflix (instant download) which I thought would be some right-wing diatribe.  What was surprising was that the filmmaker set out to do to Michael Moore what Moore does to others.  And the gambit was his (unsuccessfully) trying to arrange an interview with Moore, as Moore did in Roger and Me.
What was interesting, however, was that the filmmaker had a change of heart in the middle of making the film, and realized that using Moore-like techniques to debunk Moore was, well, intellectually dishonest.  And two of the people who told him this were the famous documentarian Albert Maysles (Grey Gardens) and Penn Gillette, the magician.

And that made it an interesting documentary, as the ultimate subject of the film was not Moore, but how so-called "documentaries" are made today, by splicing and cutting up taped interviews to make it seem that a person said something they didn't, how the ambush interview is used to make a subject appear to be worse than they are, and how ominous music and odd camera angles can be used, along with snarky captions, to make video more compelling.  And like with the Borat movie, how innocent people can be made to look ridiculous through these editing techniques.

It is intellectually dishonest and presents a story that is not what it appears to be.  It sacrifices truth on the altar of entertainment.  It is, to coin a phrase, Bullshit.  And yet, most modern documentaries are done this way, with the filmmaker stepping in front of the camera to make himself a Star, and the subjects or interviewees being edited or ridiculed to make every issue entirely one-sided.

I thought Mr. Gillette's comments were relevant in this regard and was curious as to what he was up to these days - still doing magic tricks?

Since I don't watch Cable TV (for good reason, as you shall see shortly) I wasn't aware that he had a program called "Bullshit", where he uses profanity-laced diatribes to "debunk" those he disagrees with.

While truth-seeking and debunking myths is a useful thing to do, the way Penn and Teller go about it is appalling - they debunk little, and the only thing they expose is their own ignorance.  In short, "Bullshit" is an aptly named program.

I ordered the first season first disc on DVD and watched it.  It was pretty appalling.  He used the Borat technique of getting ordinary people to say or do weird things, mostly to mock them and for entertainment value.  These people were not the subject of the investigation, merely people they met on the street or in malls.  What they had to say was irrelevant to the topic at hand, but the idea was "hey, watch these ordinary people being stupid (aided by clever editing) and laugh!"

And it is a cheap trick, as Sasha Cohen discovered.  Most people try to be "nice" and try to be "helpful".  So when you show up disguised as an emissary from a foreign country, they try to be polite, even as your behavior gets weirder and weirder.  And with some clever editing, you can make people appear to be laughing nervously at some appalling statements and actions.  It was tawdry in Borat which was "entertainment" - it is inexcusable in a "documentary" that seeks to expose "Bullshit".

The other techniques were hackneyed old Michael Moore type bits - editing what people said to make it appear they say something else.  The cuts were clear to see.  In one interview with an "end times" theologian, the edit is so jarring, as the fellow appears to instantly change clothes between statements.  It is clear they took two interviews and then pasted them together.  Pretty sad stuff.

Penn and Teller fell into the trap, in that episode, of trying to pit "Science" versus "Religion" which as I have noted before, is a false choice.  It makes it clear to me that neither Penn or Teller have any science background.  Science is not the antidote to religion, nor has it set out to "disprove" religion.  Any Scientist would know that.

They also argue that the reason they have to call people "Motherfuckers" on the air, is because of legal requirements - they can be sued for calling someone a "liar" or a "quack" but not a "motherfucker."  But the law is not that black and white.  You can't avoid slander and libel charges that easily.  And if someone is a liar, well, calling them one is not slander.

It is clear they are neither scientists or lawyers.  And I am both.  Which is why the next item jumped out at me and made me so disgusted I had to turn off the TeeVee.

In their episode on "Secondhand Smoke" they seek to "debunk" the "myth" that secondhand smoke is bad for you.  OK, sounds like a challenge.  What are you going to use as evidence?

Well, their mantra, repeated over and over again, is that the "only" evidence is an EPA study that shows that secondhand smoke is bad for you.  But, they claim, a District Court Judge in Winston-Salem, North Carolina "threw out" that study as being scientifically inaccurate.  They harp on this, as if it disproved the study.

I mean, that is pretty basic stuff.  To argue otherwise, is, well, Bullshit.

And Judges make prejudiced statements all the time, particularly when it favors local interests and industries.  And yes, a Judge in Winston-Salem North Carolina is going to be pro-tobacco.  That is the heart of tobacco country, and yes, the two cigarette brands are named after that city (or vice-versa, I forget which).

But nevertheless, Penn and Teller kept hammering on this, over and over again, as if it were some scientific "proof" that secondhand smoke was not actually bad for you, when in fact, it was proof of nothing.

They also argued that bars would go out of business and restaurants would close, all because people could not smoke while they ate.  And yet, after the ban on restaurant smoking has gone into effect in New York, it turns out that restaurants are still doing well (people go to restaurants to eat, not smoke, and as it turns out, many people, such as myself, will NOT go to a restaurant if it is smokey, while a smoker can wait 30 minutes for their next cancer stick, thank you).  In fact, many restaurants reported in an increase in business, as people who were turned off by all that smoke started going to restaurants more.

Their arguments were little more than opinions that used the modern Bullshit documentarian techniques to bootstrap into "scientific" proof.  They had strong opinions about the secondhand smoke issue (which tells me they are smokers) but they had no real "proof" in their video, just a lot of chicanery and clever editing.

What is disturbing about the series, is that these two claim to be on the side of truth and light, but at the same time, use deception and trickery to present one-sided arguments that just don't hold water.

And that is sad, because so much in this world needs rational analysis, not entertainment value.  And when you try to "debunk" a myth and just screw it up to make a few bucks, well, the myth-makers win.

Everyone who has been attacked on the show "Bullshit" can legitimately claim that Penn and Teller themselves are full of it.  Their logic, analysis, and journalistic techniques are all suspect.

And that is really sad, because I kind of liked their magic act.

Penn and Teller have a long way to go before they can be Snopes, or even Mythbusters.  And I suspect they will never get there - or have any desire to.