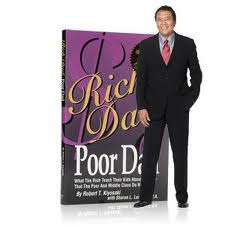 Save your money and your time and don't attend one of these seminars....

We are framing up the studio this week and had the radio blaring on the classic oldies station from Savannah.  Nearly ever ad on there (and there were lots) were for bad bargains and raw deals.  Weight loss plans, used car dealers, cheesy furniture you buy-on-time - you know, that sort of thing.

And every 15 minutes, an ad comes on plugging the "Rich Dad Seminar".  The ad says that your house is not an "investment" (true) and that there is a "secret" to making money in the new economy.  And it goes on to say that investing in your 401(k) may not be a good idea (huh?) and that "saving money" is not the way to get rich.  Oh, yea, and going to college is a waste of time.

All of these normative cues, of course, play into the emotional needs of people who have saved little, never went to college, and want validation that people who save are chumps (saving has netted me a half-mil, so far!).  Moreover, it plays into the mentality that you can make money in a get-rich-quick scheme.

So, what is the harm in attending a "free" seminar?  Well, bear in mind, people don't rent out the ballroom at the Marriott for just so you can have a free seminar.  Most of the time, they expect to sell you something.  And as you might expect, it isn't going to be cheap.

This site has a critique of the Rich Dad Real Estate seminar held in Hawaii.  This blog, talks about the sales pitch for "Rich Dad Academy".  At $499 a pop, we know who is getting rich off of this "training".  And this fellow has a devastating critique of the Author.  The Wall Street Journal was similarly skeptical.

And I'm skeptical too.

Why?  All the basic tip-offs:

1.  Saturation advertising on the radio.  If something is really a good deal, you don't need to blare it to people every 15 minutes.  The heavier the advertising, the less likely you are to be getting a bargain.  Advertising is expensive.  Bargains sell themselves.

2.  Speaking of which, if you really knew of a way to get rich quickly, why on earth would you tell anyone about it?  This is the flaw in critical thinking of people who follow the get-rich-quick schemes - no one sells the goose that lays the golden egg.

3.  Nothing in life is given away free, without some expectation in return.  And free seminars are an opportunity to SELL to people using high-pressure sales tactics.  Whether it is a time-share or a get-rich-quick scheme, once you are in the ballroom, surrounded by "true believers", you'll be getting out your checkbook in short order.

At the same time this was going on, a saturation mailing occurred on our island, with a post card going to every resident.  "We've been trying to contact you to no avail!" it says, "This is your last opportunity to get two free airline tickets to ANYWHERE IN THE USA!  Call Now!"

And of course, the gag is, you have to go to a seminar to get the tickets.  What is the seminar for?  They won't say.  And yet two neighbors, well into their 60's, asked me if this was a "legit" deal.

To which I replied, "Well, do you see people handing out free airline tickets on the street every day?  Of course not.  They are using this as bait to get you to go, in order to SELL you something you wouldn't ordinarily buy!"

And the same is true of these financial seminars, I'm afraid.  And yet, every year, thousands of people go and willingly sign checks for financial coaching or whatever.  And you can't tell people from Adam about these sort of things.

And they have been going on a long, long, long time...

I recently watched an old episode of "The Rockford Files" - probably from season two.  This is a TeeVee show from the 1970's, nearly 35 years ago.  And in this episode, an old friend of Rockford's surfaces, and it turns out he is a millionaire.  He runs a financial seminar program, telling people that they need to believe in themselves in order to be rich.  And of course, he is later exposed as a flim-flam artist.

So this sort of "financial seminar" which is long on cheerleading and motivational speaking, and short on details and specifics, has been around a long, long time.

And if you really want to make money in Real Estate (I made over a million dollars) you don't need to attend any "seminars."  There is no big "secret" to making money in Real Estate.  You have to be able to spot bargain properties, have the money and credit to buy them, be able to repair them yourself (or know some good handymen) and then be an efficient landlord.  All of that is hard work of course, and is not a "get rich quick" scenario.


There are no ways to "Get Rich Quick" otherwise everyone would be doing it.

The secret to real wealth is hard work, I'm afraid.  You have to work hard, save money, invest wisely, and spend wisely.  Most folks would rather spend freely and buy toys - and wonder why other folks are "rich".


As I noted in my posting "Beware of Financial Gurus" most of these gurus start out with good intentions, but find out that selling their advice is highly lucrative.  Also, I think, they just get worn down by the stupidity of the average American.  You can give out sound financial advice until you are blue in the face, and it does little good.  Eventually, you just get sick of people ignoring your advice and break down and say "What the heck!  You're APPROVED for a Jet Ski!" - because that is what the herd wants to hear anyway, and you'll never go broke telling people what they want to hear.

But that's the point, isn't it?  When someone tells you something that validates you existing thinking, you are really not learning anything new.  And in fact, they are probably just playing you like a cheap violin.  Listening to opposing points of view is often more educational.  And sometimes unpleasant information, such as I put in this blog, is more helpful and useful than all the feel-good motivational drivel in the world.
Newer Post Older Post Home