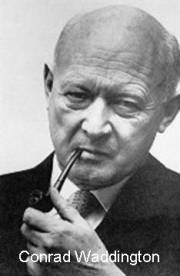 A biologist by trade, Conrad Waddington contributed to the war effort with his unusual insight into aviation maintenance.  Is it possible to over-maintain a vehicle?

In a recent issue of Sport Aviation, the EAA publication, is a fascinating article on about "The Waddington Effect".

Conrad Waddington was assigned to Coastal Air Command during WW II and asked to find out why their B-24 Libertators had such a high rate of downtime.  What he discovered was rather non-intuitive, to Engineers and mechanics.

In other words, sometimes it is best to leave well enough alone.

And this advice goes against the thinking of most Engineers at the time, or indeed, even today.  In Failure Mode Effects Analysis, we study which components in a system will fail, over a given time, and then try to replace those components prior to failure.  For a nuclear ballistic missile system, for example, where reliability is paramount, such techniques are followed - with perfectly "good" components being swapped out and discarded, after a number of hours of operating time.

But the problem with this approach to maintenance, is that our old bugaboo, infant mortality, comes into play.  There is always a finite chance that the new part you install will be defective, and as a result, you've removed a perfectly good part and discarded it, in favor of a bad one.

Compounding this is the finite and real probability that the process of maintenance itself will cause problems.

For example, the backyard mechanic decides to change his spark plugs, as they are 50,000 miles old, and an advert in the Motoring magazine said that the new fancy "platinum multi-prong" plugs could give him an increase of 20% in horsepower!  (Of course, this is not true, unless one of his existing plugs has a broken electrode).

So he decides to remove the plugs and replace them.  In doing so, he runs the risk of tearing or breaking the spark plug wire boot or connection, or breaking off the spark plug in the head (it happens, they weld themselves in place, over time) and causing more problems than he solves.  So, suddenly, a simple "preventative maintenance" procedure that was designed to increase reliability and improve performance (but which will do neither) requires a second trip to the auto-parts store for new spark plug wires and an EZ-OUT to remove the broken spark plug (or worse, removing the cylinder head to drill out the spark plug hole).

And then the poor fellow realizes that the super-duper performance plugs are the wrong heat range for his engine and make the car run like crap.  Yes, sometimes it is best to leave well enough alone, particularly in modern cars where spark plugs can last 100,000 miles or more.

Jiff Lube knows all too well about the Waddington Effect.  Changing your oil is a good idea, but as I have noted before, the idea of 3,000 mile oil changes may be over-stated.  With synthetic oils, you may be able to go 7,500 miles or more between changes, without "damaging the engine" - and this saves a lot of labor.

Every time you pull the drain plug on a car, there is a finite chance you will strip the plug, forget to put it in, or forget to fill the engine with oil.  A small chance, but finite and real.  And when you run a chain of thousands oil change centers and change the oil on millions of cars every year, well, it is certain that you are going to forget to put the drain plug back in, at least once.  And expensive engine rebuilds are the result.

By the way, this is one reason I use an oil change pump on my cars.  You can't "forget" to put the plug back in, if you never take it out.  And if never taken out, you never have to worry about stripping it.  And yes,  on one occasion, I forgot to put a drain plug back in, but fortunately the only result was pouring five quarts of new oil all over the ground.

Mechanical systems don't like to be taken apart and re-assembled over and over again.  With each iteration in the process, you run the risk of stripping threads, rounding holes, and the like.

When I was a young man, I fell into the reasoning (promoted by the car parts industry and hyped by all the car magazines, which are shills for the industry) that you should change all your fluids very often and replace parts before they fail.  And to some extent, this is a good idea, but taken to extremes, it merely means you are throwing a lot of money at a car over time, without getting improved results.

But over time, you realize a few things:

1.  Your car isn't going to last forever for the simple reason that it will depreciate to nearly nothing in about 10 years.  At that point, it won't be worth maintaining, and you will likely sell it.  So maintaining a car "so it will last forever" usually makes little or no sense.

2.  Today's cars are very reliable.  High energy ignition requires no "tune ups" or adjustment.  Distributors don't exist anymore, nor do spark plug wires - on most cars.  Spark plugs last 100,000 miles or more.  There are very few "adjust and tune" parts on a modern car, as the on board computer does all the adjusting and tuning.  Other than filter and fluid changes, there is little to do other than repair parts as they fail.

3.  Fluid changes are important, but modern synthetic oils will last 7500 miles or more - perhaps 10,000 miles - and some suggest 15,000 or even 20,000 miles (!!).  This is possible not only due to the engine oil technology, but because modern cars burn cleaner and are tighter - they no longer dump copious amounts of gasoline in the crankcase upon startup.  If you own a car for 10 years, it is possible that you may change the oil only 10 times.

4.  Many parts will run for a long time before failure.  And replacing them "early" often makes little sense, depending on the make and model of car.  If a car has a known "problem" with a component, replacing some components may make sense.  But in other cases, it may be more of a "leave well enough alone" scenario.

5.  Hop-up or "high performance" parts won't last longer or work better than regular parts of good quality - they will just cost more.  And in many cases, so-called "upgrade" parts fit poorly or have performance issues, due to their esoteric nature.  I bought the "high performance" alternator and starter ("mean green") for my truck, for example, after both original components failed.  They were costly items (hundreds of dollars each) but did fail over time (8 years).  The stock replacements were about $40 each.  Did I really save any money?  I doubt it.

Waddington was on to something.  As we used to say in the Lab, "If you go looking for trouble, you'll likely find it."  And over-maintaining a car is one way to go looking for trouble.  Another favorite saying was "If it works, don't try to fix it!" and yet many young men end up trying to "fix" vehicles that are operating in perfect condition.

Like much of what I write here, don't take this as an excuse to validate your poor vehicle maintenance habits.  If you abuse your car, you are not following the proscriptions of Conrad Waddington.  Rather, think hard before you decide that you need 3,000 mile oil changes - in a car you plan on keeping for only a few years, at best.

And that is the ultimate irony.  On car boards and enthusiast sites, I read all the time from people who are following scrupulous maintenance schedules on their cars, only to sell them after a few years and move on to the next vehicle.  What was the point of that?
Newer Post Older Post Home