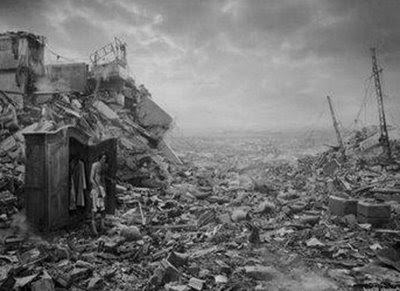 Betting on the end times as your retirement scenario is never a good idea.


When you work in a factory, you work with a lot of brain-dead people who really can't get jobs anywhere else.

And when you talk finances with such folks, you quickly realize why, even though they are making good money, they are broke all the time.

They used to make me do the United Way fund drive and the Savings Bond drives at GM and Carrier.  With regard to the latter, it was often a tough sell.  Union members making $60,000 a year would claim they were "broke" and could not afford to save, as they had so many car, camper, and motorcycle payments to make, not to mention their staggering credit card bills.

"And besides," they would say, "how do I know my money would be safe?"

"Well," I replied, "these bonds are backed by the U.S. Government!"

"Suppose the Government goes under?" they replied.

And that is the sort of thinking we are talking about here.  A long-shot scenario like the government going broke is a real concern to them - while a more likely scenario of their personal bankruptcy is far-fetched.  Putting money into an FDIC insured account is "risky" but investing in Gold Kruggerands (in 1980) is a sure thing.  And we all know how that worked out.

And yet, many people either openly or secretly believe such improbable things.  They invest in risky stocks or even pyramid schemes, while eschewing safer investments, such as government-backed or insured accounts - or paying down debt.  "If the end times come," they say, "you'll feel like a fool for paying off your mortgage!"

But the reality is, if the world "came to an end" you'd wish you had canned food, a bomb shelter, and plenty of guns and ammo.

And yes, some folks are "investing" in such things right now (and have been for decades).  It is not a sound investment.

Why?  Well, people have been decrying the end of the world for eons now, and it has yet to happen.  And even if you could "prepare" for such a long-shot contingency, chances are, your preparations would still be inadequate.

If we look at history, or even events occurring today, such as the revolutions in the Arab world, the people who survive cataclysmic events are not those who "hunker down" in their bunker with their canned goods, ammunition, and Christian end-times novels for entertainment.

No, the survivors are generally the people who run like hell.

Whether it was the Holocaust or revolution in Libya, the people who left early on and sought refuge somewhere else were (and are) the ones most likely to survive.  When the shit hits the fan, having 30 days of canned goods in your cellar or 1000 rounds of ammunition isn't going to keep the Nazis at bay.

So forget about investing in end-times scenarios.  It just isn't profitable.

In uncertain times, the people who make out the best are those who do not panic.  If you have cash and can keep your head, while all those around you are losing theirs, you will make out like a bandit.

Today, the market has bounced back.  And not surprisingly, Joe and Josephine Consumer are deciding that, now that all the big gains are behind them, that now is the time to invest.  And once again, the consumer gets screwed, because of their own idiocy.  Buying anything because it has already gone up in value, whether it is stocks or gold, is of course, stupid.  If you really want to make money, you have to invest before it goes up in value, not after.

So, how do you do that?  Short answer:  You can't.  You can gamble, as I did, with the AVIS stock, and win.  But for every winner, you are sure to have a loser.  I also bought GM, Fleetwood Enterprises, and Fannie Mae.  So it was a wash, sort of.

But there is a "sure thing" you can invest in.  It ain't sexy, but it has a guaranteed rate of return:  Pay off your debts, live debt-free, and save money, over time, in a panoply of investments, from stocks, to bonds, to government-backed securities, to insurance, and yes, even gold (when the price goes down).  If you invest in a lot of things, over time, you will do well.  If you try to "play the market" like a casino, chances are, you'll get creamed.

And refusing to invest at all, on the grounds that "the end times are nigh" makes no sense at all.  If it all goes horribly wrong, while you are hunkered down in your bunker, I'll be jetting off to Rio with my money.  Who will make out in the end?
Newer Post Older Post Home