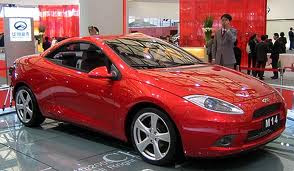 Chery motors (not to be confused with Chevy) is one of the Chinese up-and-comers in the car business.

The fastest-growing market for automobiles is China.  The Chinese, now making money and establishing a solid working class and middle class, are buying cars and chucking their famous bicycles and scooters.

At the present time, this is good news for GM, which is selling a lot of Buicks over there.  All the car manufacturers are opening plants in China and also doing joint ventures.  There is a lot of money to be made.

At the present time, Chinese cars are perhaps not up to par on a worldwide scale with European, Japanese, Korean, and even US automakers.  But they are learning, and learning fast.

And at the present time, the steep demand for cars in China is swallowing up all their production capacity, and exports of Chinese cars are not very high.

At the present time.


Query: What happens, however, when the demand for cars in China is eventually satiated?  What happens when the Chinese start to seriously export cars - like they export everything else - to the USA?

And what happens when India gets in on the act as well?

The Japanese followed the same route after WWII.  They built up their domestic auto capabilities, and using their draconian inspection procedures (which require you to scrap your car every three years) built up demand in Japan.  Once their industry was established, they were in a good position to export - starting small and methodically working their way up - to the point where they are well established today.

In 5-10 years, I predict you will see the first Chinese cars being sold in the USA.  And like the early Subarus (imported by Malcom Bricklin) or the first Honda 500 (a glorified motorcycle) or the first Hyundai (a warmed-over Mitsubishi) people will laugh at them and call them tinny junk.

But they will make waves by selling their cars, initially, for alarmingly low prices.  I think we will see an entry-level Chinese car in the sub-$10,000 price range, perhaps far lower.  And the same is true of India.

And over time, this new wave of  imports will cause even more problems for domestic automakers - unless of course, they themselves are the ones importing the cars (an opportunity fumbled the last time around by the big-3).

Long term, I don't think GM's problems are over - by a long shot.  Or that of Ford or Chrysler/Fiat.
Newer Post Older Post Home