Life Flight Insurance? Are You Kidding Me? 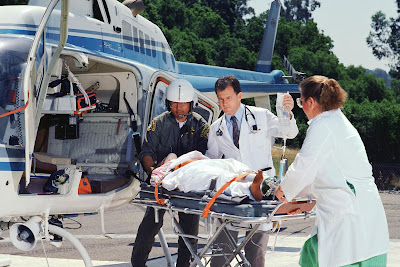 The helicopter " Life Flight"  can be a life saver for those with critical medical needs.  But should you pay a yearly fee to cover this unlikely event?


Doctors and Paramedics call it the "golden hour" - the first hour after a severe trauma such as a car accident.  In that time, if you can stabilize a patient, get them to a hospital, you can likely save their lives.

And in the last few decades, the use of helicopters to fly trauma victims to hospitals has increased, saving a number of lives.

But of course, such rescues are not cheap, and oftentimes, insurance companies don't cover most or all of this expense, which is billed out at a staggering rate.  Yes, you can fly a helicopter over the waterfalls of Hawaii for a few hundred dollars.  But flying from an accident site costs thousands and thousands, mostly because it is a medical procedure, and in our country, anything medical-related is expensive. Most insurance companies cover only the first $4000 of these flights, leaving you with a bill of $10,000 or more.

Some companies are offering life flight insurance - putting on seminars and handing out shiny pamphlets.  For $50 to $100 a year, they will cover the costs of your medical flight that is not covered by your insurance company.  Is this a good bargain?  Considering the long odds of you ever needing a medivac helicopter in your lifetime (probably 100,000 to 1 or greater) it is not really a good bet.   We are a nation of 300 million people, and yet the number of medivac flights in this country is probably measured in the thousands.  Pretty long odds!

Some of the folks offering this "service" are medical life flight companies themselves (conflict of interest?  Of course not!).  What they agree to do for the $50 to $100 fee they charge, is accept your insurance company's payment as full payment for their services.  In other words, they will lower their obscene fees to normal levels, but only if you pay an extra fee every year.

These latter plans are a bit problematic, as they cover only areas served by the company in question.  So if you travel across the country and are in an accident in an area they don't cover, well, you aren't covered by their plan.

Are these life flights expensive?  You betcha.  On the order of $15,000 per flight, and more.  But if it saves your life, it is worth it.  On the other hand, we have to wonder if it really makes a difference in many cases - or if it is just a chance for these companies to make a lot of money or justify the cost of an expensive toy.

For example, we came upon a gruesome SUV accident on the Interstate last year.  A Chevy Suburban rolled over many times and was upside down in the median.  Still think those honking big SUVs are "safe"?   Blow out a tire and these top-heavy leviathans simply roll, particularly if you are speeding.  Perhaps a tire pressure gauge, more careful driving, and a normal handling car would be a better idea.  But I digress...

Maybe it's just me, but the nearest hospital was less than an hour away.  Perhaps the ambulance, instead of waiting around for the helicopter to land, could have just hammered the throttle and beaten the "life flight" to the hospital.  A lot of dicking around, just to "save time" it seemed to me.  While the "Golden Hour" ticked away, the cops and EMTs were getting out their expensive toys to self-justify the use of them.

And one wonders whether the air ambulance people are giving kickbacks to the EMTs and Police to get them to call the helicopter, instead of just rushing people to the hospital.  One wonders.

Consider this thread - where a man "had a serious fall" (no additional details) and the EMTs suggested, no demanded a helicopter flight be used.  And you hear through the grapevine about such cases, where people are flown to the hospital for a broken leg, "just in case".

Or this poor family, whose son was run over, but could not be saved by a Life Flight - but were stuck with a $10,000 bill anyway.  Yes, this is in poor taste, but maybe they should have a "30 minutes or free" guarantee like Domino's.  If we don't save your loved one, the ride's on us!

Because, you see, that is the bottom line.  If I was in a serious accident, and such a flight really saved my life, then I would sell a car or cash in stock, or work out a payment plan and pay the damn $10,000, as it would be worth it.

But on the other hand, if they just stuffed me onto a helicopter for the heck of it, or because they had one and had to justify its existence, or they were paranoid about being liable if they didn't use it, well, I ain't paying for that bullshit.

But I wonder if these expensive helicopter services become sort of self-fulfilling.  A county pays big bucks for a shiny chopper, and suddenly everyone "needs" a helicopter ride to the hospital.  Call it the MRI syndrome.  Once we have the technology, it gets used, even if the results are a foregone conclusion.

It is a simple problem - you don't want to be the Doctor or EMT that makes the call not to run a test, or not to use an air ambulance.  Because if someone dies as a result, you'll get sued.  So, everyone errs on the side of caution and our medical costs skyrocket.

Funny how we all lived, and lived well, in an era before all these expensive "modern medical marvels".

What is particularly troubling is that it appears from the links above, that an EMT can "order" a life flight, even against a patient's will, and the patient has to pay for it, regardless.  This is a system set up from the get-go for abuse and fraud.

The pitch for "Life Flight" insurance is very troubling.  The industry is admitting they have a cost problem, but rather than addressing it, is selling long-shot insurance policies.

So, no, I won't be buying "Life Flight" insurance.  I'm saving that money for a "fell down a gopher hole" policy.  You know, gopher holes are the silent, unseen killer.  I have a pamphlet that explains it all...
Newer Post Older Post Home