What the heck is "Gov't Gold" anyway? 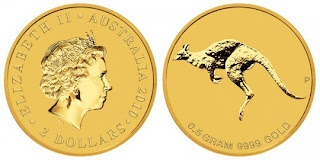 In the back of the Smithsonian Magazine are ads for "Gov't Gold" and "GovtMint".  What the heck is this all about?

To begin with, as you might imagine, the "Gov't" or "GovMint"  people are not affiliated with any government.  They are just selling gold coins at fairly high prices.

How high?  The "GovMint" people sell Australian "Kangaroo" coins, which are 0.5 grams of gold - a half a gram!  The problem is, the Aussies sell a lot of "Kangaroo" coins, running from 0.5 grams all the way to once-ounce bars.  So you'd better make sure how much you are buying.

Compounding the problem is that some sites list weights in Troy Ounces (1.097 ounces) which makes calculations harder.

Even if you buy ten at a time (for $54.95 each) the price is still a staggering $3115.65 per ounce, plus shipping and handling, or more than twice the going price for gold.

Needless to say, this is hardly a bargain.

"U.S. Gov't Gold" (not affiliated with the U.S. Mint) has American Eagle Gold Coins for $154.27 each.  They make a big deal in their ad about the "public law" that authorized these coins, perhaps to confuse people into thinking they are affiliated with the mint.  They also claim that "experts" believe gold will go to $5000 an ounce!  Of course, they don't say when.  In the year 2535, yea, maybe.

Also, the ad doesn't say what weight the coins are - or show the obverse side of the coins which state the weight (at least the "GovMint" people are up front about that!).  But you can pretty much guess it is not the one-ounce coin, but rather the 0.1 ounce version.

If this is so, then the prices here are not too staggeringly bad - about $1542.70 an ounce - only a couple of hundred dollars over market value - plus the $31 to $36 shipping and handling.  But of course, they are no screaming bargain, either.  You are paying about $200 to $250 over market value for the coins, so you have to hope that gold goes to $1600 an ounce, if you want to break even.

It would be like going to the gas station and paying 50 cents more a gallon for gas, when the gas station across the street is selling it at market value.  You are not being horribly ripped off, but then again, why are you paying about 18% over market value for what is a commodity item?

Note that most, if not all, of these coins are "bullion" types, and not Mint proofs.  Thus, they do not have much of a collect-ability factor to enhance their value.  In other words, these sort of gold coins are worth their weight in gold - and not much else.

"1st American Reserve" (not affiliated with the U.S. Mint, of course) has the same coins, only in 1 oz. form, but wisely does not advertise prices.  They list the 2011 American one ounces Eagle Silver dollar for $32 each, which at the time of printing, was not too far above the basic price of silver ($29.50).  Of course, they do say "prices subject to change" and do not mention shipping and handling fees.  So I really can't figure out whether their prices are reasonable or not.  They claim they sell for only 1% over dealer pricing.  I tried calling their 1-800 number to ask about prices, but gave up after several minutes on musical hold.  So I'll have to leave that one as an "undetermined".

So gold prices in the back of the Smithsonian are all over the board - from the high-priced Kangaroos, at more than double the current price of gold, to the more reasonably priced (but still expensive) "Gov't Gold" coins, to the supposed 1% markup of "1st American Reserve".

But even buying at market gold prices, are these coins a smart investment?  You already know how I feel about buying gold.  And I think the gold bubble will burst, and burst soon.  And buying any commodity is a tricky business best left to professionals.

And Gold is a commodity - like oil.  They take it out of the ground as ore and then refine it.  There is no big trick to it, and no, it really isn't all that rare.  Every day, a new gold mine opens up somewhere, or an old one is re-opened.  I heard on NPR how they are opening up abandoned mines in the Carolinas.  And in another Smithsonian article from this month's magazine tells how mining for gold in the Amazon is denuding the rainforest.  There is a lot of gold in the world, and at $1300 an ounce, people are finding it everywhere - even in their jewelery boxes.

Thus, buying a commodity out of a magazine seems to me to be inadvisable.  You are making a major investment decision based on a magazine ad.  Would you buy stocks this way?  Let's hope not.

Mineral wealth is illusory.  And unfortunately, the best time to have bought gold was back in 2004, before the price went up.  Trying to "get in" on the deal now, is like those poor saps in 2007 who tried to "get in" on the Real Estate boom.  They lost their shirts - and the johnny-come-lately gold buyers likely will too.

Gold goes up in price when markets are unstable.  So in the current downturn, the price goes up, just as it did in 1979.  Then, if things change for the better, as they did in 1982, the price can drop back down again - for a very, very long time (try 20 years!).

Today, the price of gold is hovering above $1400 again - and may in fact see $1500 an ounce for a brief period of time.  The problem is, once Congress passes a balanced budget and the revolutions in the Middle East die down and the oil starts flowing again, the panic in the gold market will subside.  And it is panic that drives up the prices - panic fueled by certain talk radio and TeeVee hosts, who routinely exhort their followers to "buy gold".