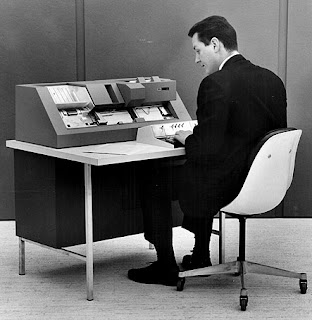 I learned to program FORTRAN on one of these.  Yes, I am that old....

You might be interested in reading this link, from a February speech given by the CEO of IBM at Johns Hopkins University:

"Of the top 25 industrial corporations in the United States in 1900… only two remained on that list by 1961 - one of those because it had absorbed six others from the original list. Two companies had disappeared, and the remaining 15 had slipped far behind.

This is a fascinating statistic for those of you who want to be stock-pickers, particularly those who want to buy high-tech stocks that pay no dividends.  What this reminds us is that most companies, no matter how wildly successful, end up fading from view, over time, due to market changes.

IBM itself, was once viewed as a unstoppable juggernaut that only intervention by the Government - in the form of an anti-trust suit - could contain.  IBM used monopoly practice more than sheer technology to gain market share.  Often, this meant that second-rate or obsolete technology (punch cards, for example) were perpetuated long after they became obsolete.

Today, the juggernaut is Microsoft, and the Government has tried to rein them in with an anti-trust suit as well.  What does this say about the Future of Microsoft?

Of course, IBM soldiers on, but as a markedly different company than the punchcard-and-mainframe people they once were.  In fact, chances are, you don't really know what IBM does today to make a living.  Something having to do with computers - but they don't actually make them anymore.
It is an interesting speech for other reasons - for example, how he glosses over the fascinating and sometimes dark history of IBM, and its founder, who left National Cash Register ("the cash") to found a company that at times has been rather ruthless in terms of competition.  I would highly recommend IBM and the Holocaust if you are interested in the history of IBM - it is a good read.
Newer Post Older Post Home