Dollar Cost Averaging - Does It Make Any Sense? 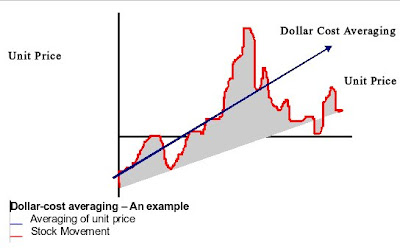 Many folks argue that " Dollar Cost Averaging"  is a great way to invest, as it limits your exposure to stock price volatility.  But at best, it is just a post hoc justification for the way we invest, anyway.

One way I got started in investing was through direct stock investment, which I started through a service of The Money Paper.  The idea they promote is pretty simple.  You buy (through their service) one nominal share of a stock in a company that has a shareholder services program.  Once you are a "shareholder" (and have your brand new stock certificate framed on the wall) you can then direct that $50 or $100 a month be taken out of your bank account and used to buy more stock, automatically, over time.

Since then, many companies have started to use intermediaries to manage their shareholder services plans.  Computershare, for example, manages a few stocks I have bought, and I can log in and buy more shares for a $1 fee, and also direct the management of the shares I have (buy, sell, re-invest dividends, etc.)

It was a good scheme for me on a number of levels, practical and psychological.  And yes, particularly when you are young, psychology is important in investing.  First of all, I did frame all those stock certificates and put them on the wall in my home office.  They reminded me of what my real goals were - to save money and accumulate wealth.  And they were a bit of a status symbol, I guess.  You generally can't "show off" an investment like you can a new car, but the framed stock certificates told visitors I was a serious investor!  And yes, we all crave status - just get over that!

And over a few years, you will build up a portfolio of after-tax savings of several thousands of dollars.  It works out well.  The only downside is keeping track of your "basis" in your stocks, when you decide to sell later on.  Fortunately, now that most of this is computerized, many of the shareholder services programs even calculate your basis and gain for you.

If you are young and just starting out, any plan that automatically takes money out of your life - a forced savings plan - is useful, in that it trains your immature (from a financial standpoint) brain to accept a lower level of income and thus spend less.  When you get a raise, instead of buying yet another newer, fancier car, put that money into an automatic deduction plan and live on your previous, lower income, if you can.  You won't notice the difference and you will accumulate wealth.

And there are so many of such plans available - your 401(k) is the biggest cherry out there, and you should take advantage of it.  Your home mortgage is another form of "forced savings" over time, although as I noted, you should not look at your home as some big money-making machine.  The payroll savings plan (savings bonds) or Treasury Direct is another approach.  Life Insurance is another example of a forced savings plan as well.  And which did I use?  All of the Above.

So the money came "off the top" and I did not miss it from my income, and thus did not spend it.  And of course, the secret was to start off small, and add one investment at a time, and then adjusting to the income level.  This entire plan would backfire, of course, if you tried to jump-start the procedure by putting too much away at once, end up broke (or in credit card debt) and then get discouraged and cash it all in and quit!

And I've seen people do just that - bite off more than they can chew, completely screw the pooch, and then cry in their soup because "they just can't save money!"   It's a classic fat chick trick - like going on a "crash" diet to try to lose weight, and then getting all depressed and binge eating when it all goes horribly wrong.  Long-term solutions to personal financial problems are not quick fixes, but instead require a lot of long-term discipline, which takes years of efforts and a lot of big and little failures.  Start out small, work your way up.  Expecting results overnight is immature - what a small child would expect.

A better approach is to start small, then look to cost-cutting in your budget, and when you realize some cost reductions in your lifestyle, increase your savings accordingly (rather than just spend the savings on some other junk).  So, for example, call the Cable Tee Vee company today and cut off service and then put that $100 a month into savings.  It is that simple, but you have to value your own life more than re-runs.

So these types of forced savings plan - where you put a little aside every paycheck or every month - can be a great way for the average middle class working schmuck to get started in investing.  Because, let's face it, you and I don't have $10,000 laying around in a savings account, waiting to be "invested".  At least I don't. (Update 2015: well, I do now, I didn't back then.)

And over time, these plans will accumulate wealth.   Put $25 a week into an investment that earns about 7.5% rate of return (not hard to do) starting at age 20, and by the time you are 65, that will be nearly a half-million dollars.  Pretty neat, huh?  And yet, many people save nothing, but spend $25 a week on Cable Tee Vee.

Yes, saving works, but you have to save.  And again, the money gurus and the financial programs will never harp on this.  Instead, they will tout the latest stock you should buy, or what fund to invest in, as if the choices you make will make you rich.  The reality is, the best the most of us can expect is a modest rate of return.  The idea that you will pick the "winner" stock and make millions is specious.

For example, I bought AVIS for 74 cents share and within a few months it was trading at over $10 a share (so I sold most of it).  That is over a 1200% gain in about six months - stellar investing, right?  Well, not exactly, as many of my other "picks of the dregs" at the time, such as GM, just went bankrupt instead, wiping out much of my gains from AVIS.

But also, even if I was "smart" enough to have foreseen this gain (and apparently no one was, otherwise the price would have been higher than 74 cents a share) I still would have had to have MONEY to invest to make a killing on it.  I invested $750 in the stock and got back $10,000.  Hardly enough to retire on.

But here's a funny thing - actually two funny things.  First, a million bucks ain't a lot of money.  If spent at the 4% rule in retirement, it would generate maybe $40,000 in income a year - or about what a plumber's apprentice (non-union) makes.  Not exactly striking it "rich" - more like "striking it middle class!"

Second, I don't know about you, but at the time AVIS stock was at 74 cents a share, I didn't have $75,000 laying around to invest (I did have $750!).  And moreover, at my income level and wealth level, investing that much money into one stock would have been idiotic.  It was a risky bet - one that paid off, of course - but I had no idea at the time it would.  It could, if circumstances had been different, gone the other way, and left me $75,000 poorer - a loss I could ill afford to take at the time, or even today.

So forget "stock picking" and the financial channels and the shouting guy and the guru books and all that CRAPOLA and instead just save your money, diversify your investments, and accumulate wealth slowly, as that is the only guaranteed way to get rich, for the average middle-class schmuck.

Now, getting back to the subject of this posting (once again, I digress!), many financial advisers and the Money Paper suggest that Dollar Cost Averaging is another reason to invest $50 at a time, instead of all-at-once.

The logic is a little convoluted, and there are many critics of the idea.  Others think it is a swell idea.  The basic premise is that if you buy a stock, say $50 each month, when the stock is low in price, you end up buying more.  And when the stock is high in price (less of a value) you buy less.  And over time, your cost for buying the stock will even out to a level that attenuates both peaks and valleys.

Does it make sense?  Well, it is one of those deals that when someone explains it to you, it makes "sense" at the time, and when you walk away, the reasoning seems to evaporate in your head, leaving the words "Dollar Cost Averaging" floating in your brain.

But the bottom line is this:  Unless you are filthy rich, you will be investing using the Dollar Cost Averaging technique, regardless.  You put money into your 401(k) in bi-weekly dribbles.  You may invest in stocks, bonds, or other vehicles $50 or $100 at a time, if you use the techniques described above.  Chances are, if you are like most middle-class Americans, you aren't sitting on a hoard of cash, deciding where to make your "next big kill in the market" - but rather are trying to sock away a little money here and there while paying the light bill and your baby's diaper bill.

So, Dollar Cost Averaging, is, to me, a reassuring excuse us little folks use to make us feel better about our investing - that we have some sort of "advantage" over the big players in the market, like Warren Buffet, when in fact, we really don't.

But, again, please don't take this the wrong way (and force me to slap you).  Don't use the discussion here as a self-justification to not save at all!  (And yea, I have seen people do stupid stuff like this - "I can't be a millionaire after saving for two months, so I might as well not bother!").

Just save - have a savings PLAN in place, and over time, you will accumulate wealth, Dollar Cost Averaging or not.

And it is far better plan that the other option - not saving at all, and hoping some day to "strike it rich" somehow, vaguely.

You'd be surprised how many people are opting for plan B these days.

The upshot is this:  The arguments for and against dollar cost averaging are irrelevant.  If you can only swing $50 a month (or whatever) to invest, you are going to dollar-cost-average, regardless.  If you have $10,000 to invest in one lump sum and want to try to " time the market" - good luck with that!  If you have $10,000 to invest, chances are, you are going to invest it all at once - not spread it out over months or years in order to "take advantage"  of dollar cost averaging.  So the arguments are silly.  People invest using dollar cost averaging largely because they have to not because it is some clever investment strategy.

And if you want to use the dollar-cost-averaging argument to make you feel better about your investments, well, then do it.  But don't kid yourself that this is some sort of clever investment strategy instead of your default option.
Newer Post Older Post Home