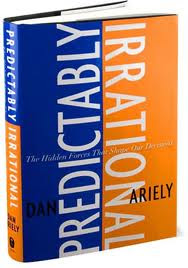 This book by Dan Ariely makes some interesting observations.

A reader suggested I read "Predictably Irrational" by Dan Ariely and it is a pretty good book which I recommend.  The book is fascinating in that it validates some of the financial ideas that I have been talking about here and also has a lot of other interesting concepts as well.

Pain focuses the mind to what is important, and when you are in pain, getting out of pain is what is important.  Suddenly, having a Jet-Ski doesn't seem so important, nor do things like consumerism and being seen in the right clothes or having granite counter tops.  It allows you to think differently than most people.  And not surprisingly, a lot of great people in this world, were also in great pain most of the time (Roosevelt and Kennedy, for example).

And of course, you wouldn't wish that kind of pain on anyone.

But Ariely mentions it prominently as a source for his observations and inspirations, and this makes a lot of sense to me.

I won't give away the whole book, but some concepts that resonate with me were his chapter on "Free" or "The Cost of Zero Cost" was interesting - and how making something "Free" (or apparently free) alters our perceptions.

He also points out how arbitrary pricing is, and how we use context to determine prices.  As I noted before, when you go to the Mall and see "70% off!" on a new dress, it seems like a bargain, until you realize that you are comparing the price with a specious "retail price" which is basically a made-up number.

Similarly, paying "below invoice" for a new car seems like a bargain, until you realize that this invoice number, too, is made up and does not represent the real cost of the car - and that the real value of the car, as determined by the marketplace, will be 10% less than whatever you paid, the moment you buy it.

In a way, Ariely is part of this new trend of economists (or financial gurus) who are eschewing or at least modifying the Adam Smith "market is always right" model of economics.   Whether it is the "Freakonomics" people (who have made quite a franchise from that gig) or the "Long Tail" guys, or Larry Summers, who once began a paper on finance by declaring "There are idiots, look around you".

People, it seems, behave in a model that is irrational - and predictably so (hence the name of the book) and what is so revolutionary about this concept is not that it is so non-intuitive, but that most of us realize this instinctively, but that economists failed to grasp this simple concept for over a Century.

I recall seeing on PBS a documentary about crowd control (there was an interesting piece on this in the New Yorker, recently, as I recall, as well).  In that documentary, they showed computer models used to determine how many exits and stairs would be needed to evacuate an Office Building.  In the models, the office buildings (or airplanes or whatever) were evacuated in very short periods of time.

But in reality, it always took longer to do, unless, as the aircraft manufacturers to, they spoof the data by using trained evacuees in the water tank to do the simulation.

The computer modelers went back to the drawing board and came up with a new model, that was adjustable.  And the new model fit the real-world data.  In the new model, they postulated that some folks would evacuate in an orderly fashion, while others would try push their way ahead.  Still others would do stupid things like try to go back for their briefcase while still others would just run around in circles, hysterically.  And the animation of this model was pretty funny, if the real-life consequences weren't so tragic.

There are idiots, look around you.

And whether it is modeling office building or airplane evacuations, or traffic flow on the Interstate, people will behave in non-intuitive manners.   Just now, I came back from Florida, and a hippie in a Westfalia VW bus was riding in the left lane, doing 50 mph in a 70 zone.  You can only imagine the major cluster-fuck that produced on the highway - which could have escalated into a fatal accident quickly.  According to Adam Smith, this hippie should have found the "correct" lane for his speed and optimized his experience, as well as that of everyone else.  But Adam Smith was only talking in a macro sense.  On an individual level, people do stupid things.

But again, this is good news for you, the consumer.  If you merely act rational in an irrational world, you can make out like a bandit.  If you can sell when everyone else is buying, or buy when everyone else is selling, many times you come out ahead, as you buy low and sell high, while the great masses do the opposite.

And when it comes to personal finances, if you can see through the smoke and haze and not just drift through life, then you really can get ahead in life - despite that the idiot media pounds into your head, day after day, about what a sorry-assed "victim" of circumstance you are.
Newer Post Older Post Home