The Profit in Non-Profit Organizations 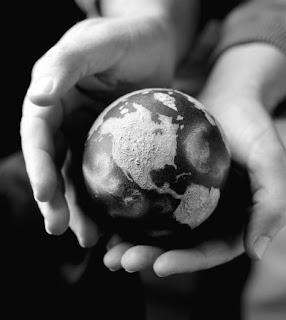 Are all non-profit organizations out to save the world?  Not really.


As I noted in my article about Public Broadcasting, the people who run these sorts of organizations, including NPR, take home seven-figure salaries.  There is a lot of profit in a non-profit!

Many folks assume that a "not for profit" corporation or agency is a cross between Mother Theresa and Mahatma Gandhi, with a little Jesus thrown in for good measure.  They assume (wrongly) that such agencies are basically staffed with volunteers and are doing good for the world, at great sacrifice to themselves.

And perhaps there are one or two out there like that.  But I doubt it.  Because at the end of the day, most of these organizations, whether they do good or not, end up paying salaries, and not insubstantial ones, to the people who run them.  There may not be shareholders or owners, but there are people taking home money from these places.

Non-profits, on the other hand, have no shareholders.  So when there is money left over at the end of the year, well, the non-profit can spend it - to provide more services, hire more people, build a new office building, or increasingly, awarding raises and bonuses to employees, particularly those at the top of the pyramid.   Organizations tend to take on a life of their own, in this way, as the people running them have a vested interest in expanding the organization, hiring more people, and thus justifying their incredibly high salaries at the top of the pyramid.

And with no shareholders to appease, accountability in a non-profit may be largely non-existent.  There may be a "Board" of celebrity directors, but most of them do not get involved in the day-to-day operations of a non-profit, unless it looks like it is about to go bust, or get involved in some legal morass, as ACORN did.

So yes, there is a profit in a non-profit.  The employees are the ones making the profit.  What they take home in their paycheck is the profit of the company.  And without pesky shareholders demanding their slice of the pie, they can take home a lot more.

Don't assume that merely because an organization is classified as "non-profit" by the IRS that it means it has been anointed as saintly.  All "non-profit" means, really, as that, for the purposes of tax calculations, there are no shareholders who receive profits.  In a way, it is not too dissimilar from a Subchapter-S Corporation, where profits pass through directly to shareholders (who are usually employees) - only in this case, the profits pass through to employees, as there are no shareholders.  What's the difference?  Not much.

For example, a friend of mine runs a politically correct Hippie theater.  They are formed as a "non-profit" Corporation, which sounds really cool and earthy.  But the reality is, they pooled their money (capital) to buy materials for sets and costumes, put on shows, collect money, and then pay for expenses with that money.  What is left over is paid to themselves in the form of salaries, which, like any other profit, is used to buy their food, pay for their housing, and their Volvos.  Money is money - you can call it "profit" or "paycheck," it still spends the same.  And they are still doing the same old, same old, investing money and energy in an enterprise, hoping it pays back.

They could just as easily form a Subchapter-S corp, with each performer being a shareholder, taking home their share of the leftover money (what we call "profits") to about the same effect.  The only difference is the words "profit" and "non-profit". 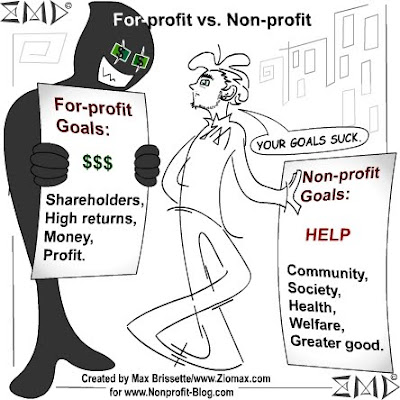 This is a pretty naive view of how non-profit institutions work.  Not every non-profit organization has laudable goals or are out to "help the community."

As I noted in my Organizations posting, organizations can take on a life of their own.  A non-profit that takes in a lot of money, well, they have to spend it somehow.  So they can expand their own operations, hire more people, and of course, the folks at the top of the pyramid make more and more money, which they justify on the grounds that they are supervising so many people, and of course, they have to make more than the guy immediately below them.

In fact, it can be a pretty sweet gig.  Start some non-profit organization dedicated to doing some world good, and collect donations.  You get to help the world, and get paid to do it at the same time.

And granted, some of these organizations do worthy deeds.  Habitat for Humanity does build homes for selected needy people.  But not all organizations or non-profits are structured to do charity work.  Many in fact, are merely businesses.

NPR, for example, is hardly a "charity" but more of a radio network, indistinguishable from any other radio network, other than the programming content and the lack of shareholders or owners to pay.

As the link to the "emo" cartoon above shows, many folks are under the mistaken impression that a "non-profit" organization is somehow saintlier or better than a for-profit enterprise.  But while there are some charities and organizations that set out to do good deeds, the term "non-profit" does not necessarily mean the organization in question is a do-gooder.  It only is a tax classification.

But, hey, someone who self-identifies themselves as "emo" probably wouldn't get that...