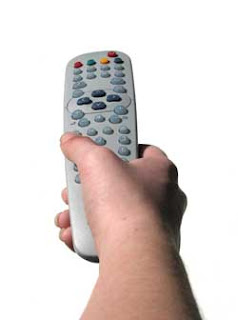 Some people never figure out how to work the input select on their remote controls.  Why is this?  These sort of things have been around for a decade or more!  These same folks could never set the clocks on their VCRs, either...

I was in line at the Post Office the other day.  Postal workers really are saints, although most people don't think so.  I mean, I would probably "go postal" on the customers if I worked there.  Imagine, for a moment, you sit behind a counter all day long, and answer the same question, over and over again, "How much is a first class stamp?"

And yes, people are this stupid - this willfully ignorant.  For example, a lady in line at the post office wants to send a package.  "How much will this cost to send?  It is all so confusing!"  I tell her that there are basically three rates:  Parcel Post, Priority Mail, and Express mail.  And the best deal is a Priority Mail Flat Rate Box, as the package will get there in a matter of days, they provide free packaging, you don't have to weigh it, and if you create the label online, you get free package tracking.

She asks me "How do you know all that?"  And I replied, "Well, I figured I was going to live in this country another 30-50 years, so I might as well learn the postal regulations of my native country, as I would probably send a few hundred packages in that time."

I know that sounds smart-ass, but the lady I was talking to was nearly 80 - and she has been using the Postal Service her whole life. And yet, for some reason, the regulations and shipping rates never sort of "stuck" in her mind, and every time she sends a letter or a parcel, she has to learn, all over again, how much it costs.

Is she that stupid?  No.  She was clearly not retarded or even dumb.  She was just being willfully ignorant because it was easier not to learn - and easier to just hand the package to the postal worker and say "how much will this cost?" and re-learn the postal rates every time.

In a way, it is like with televisions these days.  Most modern flat-screen, or indeed, even the older tube-types, had multiple inputs - coaxial cable, baseband, RGB, YUV, HDMI, etc.  You have to hit "INPUT SELECT" on your remote to select from the cable box, your DVD player, computer, or other input source.  And this technology has been around for a decade or more.

And yet, I meet people who say "I can never figure this out - how do I get the TeeVee to play one of my DVDs?"

And I show them the "INPUT SELECT" button on their remote, and even write down the instructions, but a month later, they "forgot" how the TeeVee works, and ask me again.

I mean, this is scary.  It's like they forgot which gear makes the car go forward.  Was it R or D?  I forget!  It's so confusing!

Why are people willfully ignorant?  I think there are a number of reasons.

1.  Status:  Being technically capable is seen as declasse - it reduces you to the level of tradesman.  After all, Marie Antoinette, were she alive today, would never figure out how to reformat her hard drive - she would hire lackys to do it for her.  Being technically helpless in a technological world is the modern equivalent of "let them eat cake".

2.  Facts are Scary:  As I have noted before, the idiot media, including NPR, "dumb down" their broadcast content to the point where it is at a 3rd grade level.  I kid you not.  Today on NPR, they had a piece on the criminal investigation of the BP oil spill.  The "correspondent" noted that several people on the oil platform were scheduled to have their depositions taken in the civil lawsuit.  She then added, "A deposition is when a person gives evidence, under oath, in a room with lawyers."  I was sort of flabbergasted.  They had to explain the meaning of "deposition" in 3rd grade words?  But that illustrates how people are scared of facts - and how our media tries to strip content from newspapers, television, and radio.  Facts are considered boring or scary - and they think we will "tune out" if they get too factual.   And unfortunately, they are right.  Better to get back to the celebrity gossip as soon as possible!  Or perhaps "commentators" who shout at one another.  THAT is what we want to hear!

3.  Lack of Education:  We don't educate people in this country - at least with regard to anything difficult.  While students can take endless classes on "self-esteem" and other "soft" courses, things like mathematics, science, writing, and other course are deemed "too hard" for most students, and are made optional.  We not only have illiterate high school graduates, but functionally illiterate college graduates.  Kids spend $100,000 of their parent's money and graduate with degrees in "Communications" and wonder why it doesn't lead to any sort of job - or why they still basically cannot function as citizens in our society.  Basic stuff like personal finances and how to exist in planet Earth are taught nowhere.  You are left to fend for yourself, in terms of figuring out life, how to feed yourself properly, balance your checkbook, get ahead in life, etc.  And technology?  Unless you are going to study Engineering, your education will be safely sanitized of any sort of technology - and yet we toss students out into a world dominated by it.  Go Figure.  This is one reason  I think college is not for everybody - at least not until they reform colleges to actually teach something of significance.

4. Fear of Failure:  In order to learn, you have to want to learn.  And this means actually buckling down and doing painful things - and one of the most painful things about learning is being humiliated.  Humiliated at your own stupidity and lack of education.  But when you experience that humbling, it is then that you realize you are learning.  When you stand up in law school and are ridiculed by the professor, it is only then that you realize how weak your thinking is, and how much you have to learn.   In order to learn, you first have to realize that you don't know something.  And these are hard, painful lessons.  But that is part of the learning process.  As I noted before in another posting, many people prefer to sit in the back of the class and snicker at those who give the wrong answers - while they themselves give no answers at all.  They would rather "look cool" than bruise their ego in the learning process.  And those folks rarely learn anything.  But they are "safe" from momentary ridicule.  And such folks are nearly impossible to teach, as the moment you try to correct them, they get defensive and have to protect their ego, rather than admit a mistake.  To them, it is the learning process that is flawed, not them.  So when you show them how to do something, and they get it wrong the first time - well, then it ain't worth doing.  But painful lessons are the hardest - but the best.  We learn more from failure than we do success.


So we have an army of people who are willfully ignorant - the march of the morons.  People who giggle and say "tee hee, I don't understand all this complicated technology!  I'm as helpless as a weak kitten!" - and say this with pride, as if it were a badge of honor.

Ignorance is Strength, it appears.  Actually knowing something is a weakness.

And of course, the world is full of people who complain that somehow they got a raw deal.  They leased a new car, and now they are broke.  They ran up credit card debt and now can't pay it off.  They took out a payday loan and now are destitute.  And it is never their fault - it has to be someone elses, right?  They don't want to learn from this mistakes - they prefer the soft, fuzzy, warm, insular world of willful ignorance.

Reality is harsh, to some extent.  But once you get used to it, you realize that it isn't as bad as some folks make it out to be.  And in fact, living in a fantasy world is far harsher.  While fantasies are nice and all, they inevitably collide with reality - which makes reality seem like the "bad guy" to them, and hence why they retreat immediately back into fantasy as fast as they can.  But reality only seems harsh to those living in fantasy.  When you are drunk or stoned all the time, getting a grip on your life seems hard to do.  But when you are sober, it really is a lot less hassle.

Perhaps, again, I digress.  But there is a connection - a commonality - between the granny who can never figure out the postal rates, the stoner son living in his parent's basement, and the housewife who has to ask her husband, every time, how to use the remote control.  All three are denying reality and taking what appears to be an easy way out, when in fact, what they are avoiding learning is not all that hard, and once learned, would save them countless hours of time, grief, and distraction.
Newer Post Older Post Home