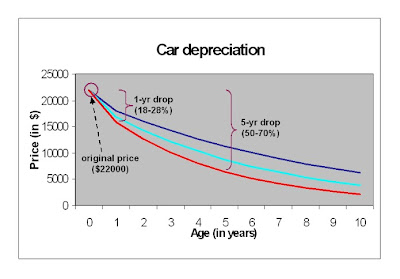 Motorized vehicles depreciate almost linearly over time, with a big drop in the first year of ownership.  Eventually, they are worth little more than scrap value.  And this is true for any motorized vehicle, period.

I wrote about the "Depreciation Deduction" in my posting Converting Ordinary Income to Capital Gains.  In that posting, I noted that from a tax perspective, the term "Depreciation" is confusing, as nothing is really depreciating - it is just a handle for a tax concept.  That is not what we are talking about in this posting.

In your personal life, you can understand ordinary depreciation firsthand.  You buy something and immediately it is worth less than you paid for it.  Over time, it is worth less and less, as it wears out, until it is worthless.  Whether it is a car, boat, a pair of shoes, a couch, glassware, a stove, a pencil, your computer, a hair brush, whatever, most manufactured goods depreciate over time.

Now granted, some things may not depreciate very much over time, as they tend not to wear out much.  An anvil pretty much reaches a plateau in value quickly, as it doesn't "wear out" much.  And granted, some things that are collectible, may actually appreciate in value, but those items are few and far between, and at best, their appreciation matches the rate of inflation, or provides a very modest rate of return.

But most of the crap you own is going to be worthless in short order, so just get over it and realize that.

And nowhere is this more true than with motorized vehicles.  Cars, trucks, boats, motorhomes, jet skis, lawn mowers - you name it - if it has an engine, it depreciates pretty rapidly.  And even electric cars will likely follow a similar path, as the battery packs are the big-ticket item that, once dead, will cost more to replace than the car is worth.

People like to think their car will be "collectible" but it won't be - not for decades.  And by then, even if it increases in value, chances are, you'd come out ahead if you had sold the car years earlier and put the money into stocks or even bonds.  Only poor people think that their cars are major assets or valuable - or will be collector's items someday.  And getting out of the poor-think mindset is the first step toward becoming wealthy.

As an Engineer, I can tell you that the reason for the depreciation of a vehicle is sound.  Parts wear out over time. Which parts?  ALL OF THEM.  The engine, of course, wears every time you run it.  Eventually, it will start to blow oil and need to be overhauled, if some other problem, such as overheating it, doesn't turn it to toast first.  Suspension components wear out over time - ball joints, tie rods, struts and even springs - and are expensive to replace.  And the paint (it is a part of the car) gets scratched and peels off, and the upholstery tears and the carpet gets a funky smell.

To be sure, there are ways to make a car last longer, and I have written about them here.  Garaging a car, driving it gently, treating it with respect, and maintaining it will make it last longer.  But even a well-maintained car will follow the same depreciation curve.  I can tell you firsthand, that a "low mileage" car in immaculate condition is not worth a lot more than one in "average" condition.

So, what is the point of this posting?  Well, several things:

2.  The overall cost of owning a car is the depreciation, plus repairs, fuel, insurance, and taxes.  Usually the depreciation is the largest expense - but the one people think least about.  People obsess about saving 5 cents on a gallon of fuel, but fail to think about how much the cost per mile is, in terms of depreciation.

3.  All motor vehicles will be worth about half what you paid for them (new or used) after five years of ownership.  This can represent a huge loss of value to you and a big hit to your net worth.  Thus, it makes sense not to spend a lot of money on vehicles in your life, as they will constantly be dragging down your net worth.

4.  While owning a car that is 10 years old or more might seem like a good bargain,  based on the above curve, for most people, it can be a repair nightmare.  Cars follow the Weibull curve, in that after a certain stage (usually 150,000 to 200,000 miles, depending on care an usage) where things start to go wrong in a big, big way.  Fishing too far downstream can be more expensive than owning a brand-new car, unless you are very, very handy with tools.

So, for the average person who isn't a part-time auto mechanic, what is the best deal?  Well, as the chart above shows, if you can find a late-model used car, you can get it for far less than brand new - when the major hit on depreciation has already occurred.  But since the depreciation curve flattens out after that, the net cost of ownership can be far less - perhaps half - then that of buying a brand new car.

Those are the best bargains out there.  They provide you with a late model "reliable" car, still under warranty, that looks good, provides many years of reliable service, with a very low rate of depreciation.

The good news is, since the majority of Americans are so clueless this way, it means better deals for you, the astute buyer.  There are real bargains out there to be had, you just have to look for them.  And they aren't on a dealer's lot!
Newer Post Older Post Home