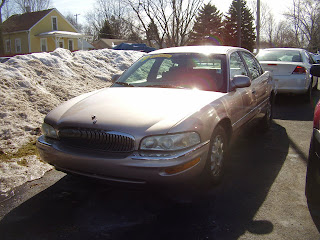 You might think that a beige Buick is the cheapest car to insure, as the type of driver who owns one is going to be the type who drives slowly and carefully.  But it isn't that simple, as it turns out.

So you want to get a new car.  And if you're reading this blog, you want to save money.  And of course, the best way to save money is to buy a lightly used, late-model car with about 30,000 miles on the clock.  You'll save at least 30% off the price of a new car, perhaps more.  And it will last nearly as long, if not longer, particularly if you take care of it.

But of course, there are other expenses with owning a car, and for many folks, the largest secondary expense (in addition to the depreciation) is auto insurance.

No doubt, you've seen the annoying ads on the Internet about the "secret trick to low insurance rates!" and wonder what that is all about.  Turns out the secret is no secret at all.  If you own a car that you can pay cash for, you can drop collision and comprehensive coverage and save a bundle.

And if you drop uninsured motorists insurance coverage, as well as the $10,000 medical coverage, and junk coverage like towing and glass, well, you can save even more.

And yet, many people pay hundreds and hundreds more a year, putting collision and comp on $3000 cars, which, if wrecked, will pay out hardly more than what was paid in, in premiums, perhaps less.  If you can't afford to walk away from what is parked in your driveway, you own too much car for your income bracket, period.

So what car is cheapest to insure if you need collision?  Well the results are somewhat surprising  in that cars you would think would be cheap (a Buick) can be fairly expensive, and some cars you'd think would be expensive (SUVs and Jeeps) are fairly inexpensive.

Collision insurance costs, of course, are going to be determined by two factors - the tendency of the car to get into an accident, which is often determined by driver type, and the cost of the vehicle.  So it is not surprising that the cheapest cars to insure are in fact, minivans.   Minivan drivers are least likely to be hot rodders and reckless drivers.  And most minivans are relatively cheap cars ($30,000 or less) and made in high volumes, and thus are inexpensive to repair.

New BMWs are somewhat expensive because younger people who lease them may be tempted to drive aggressively.  And since they are expensive cars and parts are expensive (as they are made in limited numbers) they can be costly to repair or total out.  Really esoteric rides, like Porsches and Maseratis top the list, of course.  If you want to play, you have to pay.

But, I have to tell you, the best part of car ownership is when the car is older and worth less.  Most modern cars can go easily 100,000 miles and many reach 200,000 miles without too much effort.  It is nice to have a car - even a BMW - that you don't have to worry about so much, if it is damaged, stolen, or crashed.  And paying only $31 a month for insurance is really the sweetest part.

So why do people pay far, far more for cars than I do, oftentimes to drive econoboxes?  Particularly young people, who often spend more on insurance than car payments?  Why do people jump off bridges?  Because the vast majority are not that bright, and they value status (or what they perceive to be status) over wealth.  Apparent wealth trumps real wealth for most folks.

Which brings up the most salient point about car insurance.  While make and model of car may have some bearing on your cost of insurance, the major factor in determining cost is going to be your age, gender, and your driving record.  You can buy the cheapest car to insure, and it won't really matter, if you have a DUI, 5 speeding tickets, and three accidents on your record, and you are under 26 years old.  Insurance for you will cost thousands and thousands of dollars a year, period.

So the best way to lower your insurance rates is to keep to the speed limit, or don't go too far over, and obey the traffic laws to the letter - and drive defensively, looking out for those vast majority of idiots who are always in a hurry to be somewhere (but whose lives are so empty and pointless, you wonder why they are in such a hurry!).

And yet, we all do just the opposite, which is one reason the poor stay poor.  When I was young, I drove fast, got a lot of tickets, an accident or two, and then had to pay copious amounts for car insurance.  A smarter move would have been to buy a secondhand car for cheap, pay cash for it, and live without collision and comp.  And if I drove normally, my insurance rates would have been somewhat reasonable.

But few young people choose to do that.  At that age, we are all tempted by the shiny lights of the new car dealer, and the idea of being an "adult" and buying a brand new car.  But what we fail to realize as 20-somethings is that being an adult is all about not giving into the temptation to buy things on credit.  Being an adult is all about being fiscally responsible.

But alas, most of us don't learn that lesson until it is too late!
Newer Post Older Post Home