Can Fiscal Responsibility be Taught? 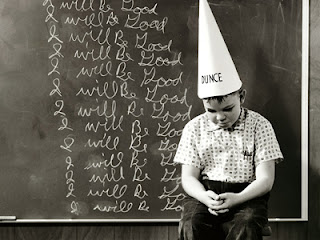 When it comes to personal finances, most of us are Dunces.  But then again, it is not like anyone teaches fiscal responsibility.
In my "Is Spendthrift Behavior Learned or Inherited?" post, I realized that I didn't address the underlying question.  Namely, can you teach a person to be fiscally responsible?

It is a very relevant question, as what I am learning in writing this blog is that a lot of the financial misery in this very, very wealthy country is caused when individuals make bad personal financial decisions.  A child who eschews learning, for example, sentences themselves to a lifetime of penury.  A young working man who decides to finance a Harley, Jet Ski, or Penis Boat "on time" instead of financing their 401(k) will end up broke in retirement.  And all of us are continually baited by the loud advertisements for the commerce carnival, and continually suckered into bad deals in leasing or buying new cars, or running up credit card debt, or whatever other bad bargain "they" want to sell us this week.

Fiscal responsibility is hard to learn.  It was hard for me, anyway, and I never really took a course in it.  Law school was sort of a wake-up call, although most of my professors assumed (wrongly) that young Law students would be fairly sophisticated when it came to personal finances.  I knew more than one Law student who was buying a new BMW using money from student loans.  Pathetic, really.

So how do we teach fiscal responsibility?  Good question.  I think one step would be to have at least one class in school about finances - but I suspect the credit card companies wouldn't like that very much!  Like with the satellite dish zoning ordinances, "concerned parents" would protest to the school board that such instruction was against creationism or was intruding into the personal lives of people - the "concerned parents" of course, being folks who work for the banking industry.

Sound far-fetched?  Who are the "concerned parents" who are beating up school boards because they are trying to serve healthy foods?  You see all the time on the Internet, people calling such folks "Food Nazis" for even suggesting that a plate of nachos might not be health food.  And Michelle Obama seems to be particularly singled out for such abuse.  Apparently, she forces little kids to eat carrots!  War crimes!

Parents can try to teach fiscal responsibility in the home of course, which I suppose is where some folks think it, like sex education, should be taught.  But does that work?

My Father gave an allowance to my two older siblings, but not to me and my Brother, which is an interesting contrast.  My late Sister reported that he would give her a small sum of money every week, and then ask her to account for all of the money, down to the penny.  When she couldn't remember, he would browbeat her about it, and she would stop crying.  "I never thought to just lie about it," she said, "and make up an expense that would appease him."  Clearly, she never would have made a good Accountant.

My Sister went on to be a spendthrift in life, often asking my Father for "loans" for things like cars and other expenses.  And for some reason, Fathers have a soft spot for daughters in this regard.  My Father's attempt to teach fiscal responsibility backfired.  My late Sister learned only that fiscal responsibility = pain (being yelled at).  My older Brother became a Communist.  So clearly, browbeating people to learn will have a backfire effect.

My Brother and I did not get an allowance, but had to fend for ourselves.  Of course, kids don't have much in the way of expenses.  We had a charge account at the local drug store, and on occasion would charge small purchases, such as candy and magazines and the like.  I am not sure this was a good teaching lesson, as it taught me only that things had no real price in my life, other than what I could get away with charging at the drugstore, without my Father grousing too much about it.  As we became adolescents, of course, my Brother and I started charging more and more, and the charge account was quickly taken away.

Money, as I have noted time and again, is power, and one thing that sucks about being a kid - and particularly a teenager - is that you have little or no power in your life, particularly without money.  The lack of an allowance or any sort of spending money was one reason I got a paper route.  This could have been a good opportunity for learning fiscal responsibility, as in many routes, you have to buy the papers from the distributor and "re-sell" them to the customer (this way, the newspaper avoids charges that they are paying sub-minimum-wage).  If you do not keep accurate books or collect all your monies, you can go broke.

One problem with that model is that some customers had no compunctions about not paying a 13-year-old for the papers.  They assumed the newspaper would absorb the loss, not the kid dropping the paper at your door.  And they assumed wrong.  The paper, wanting to keep failing circulation up, forbid us from dropping subscribers who did not pay.  And since we had no way of collecting from deadbeat subscribers, it was a Catch-22 kind of situation.

But taking that aside, I was not the most astute at keeping books and records, and of course, the local distributor also felt no compunction about deceiving schoolboys by saying they sold them more papers than they actually did.

But it was, I guess, a good education in that it taught me that keeping careful financial records was important in a business - a lesson that I would not fully learn for another 20 years or more.

Running your own business sort of forces fiscal responsibility upon you.  You need to keep careful records for tax purposes, of course.  But more than that, you need to understand how much your clients owe you, how late they are on payments, and how much you owe others and when those payments are due.

Until I bought (and learned how to use) accounting software, this was pretty much a mystery to me, a most of my "books" were kept in a ledger, and it was not a good way of understanding where I stood financially.  I took a night course at the local adult continuing education center on how to use Quickbooks.  And I quickly realized that I knew nothing about what "accounts receivable" meant, or whether something was an expense or income.

Basic bookkeeping is not taught in High School, College, or Law School, unless you intend to become a bookkeeper.

But in short order, I started to get the hang of it, and as I computerized my records, I was appalled to learn that one client had not paid me in over six months.  It was, to say the least, a wake-up call.

But my education did not end there.  While I was making "good money" and investing a lot of it - and making good money in investment Real Estate - I was still squandering a lot of money on unnecessary living expenses.  A LOT of money, over time.

The recent recession, which gave me the impetus to start this blog, has been a painful learning experience for all of us.  But why should it take something like that to force most of us to confront our own financial behavior?  (And of course, many chose not to confront it even now - instead blaming Obama or Wall Street for their troubles!).

In other words, why should it take 50 years to just even start to learn to be fiscally responsible?  By the time you get it "right" you've already made most of the important fiscal decisions in your life (and probably gotten many of them wrong) and moreover, more than half your life has elapsed.

And this is assuming, of course, that you ever learn anything.  I know many folks well into their 70's, who are still making the same bad decisions and then complaining about how awful they have it.

A course in basic personal finance would have undoubtedly helped me, if it had been taught in High School, or perhaps Junior High.  And perhaps a series of such courses would be helpful.  Back in the day, they used to have such courses, under the names of "Citizenship" or "Personal Law" or the like - teaching you the basic nuts and bolts of daily living that Geometry, Creative Writing, and Gym Class don't impart.

But again, if someone doesn't want to learn, you can't teach them.  And like most young people, I didn't want to learn about money - I just wanted it, the more the better.

But aye, there's the rub!  You can't accumulate money without first understanding how it works!
Newer Post Older Post Home