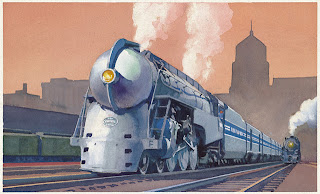 The Spirit of Ludowici leaves Brunswick Station bound for the Big Apple.
All Aboard for Broadway!
We are taking the overnight train, The Spirit of Ludowici to New York City to see a Broadway show!  How fun!  But what exciting new show to see?  There are so many choices, I don't know where to begin!  Here are a few I found on the Broadway.com website:

The latest remake of The King and I starring Kirstie Alley:  What's not to like?  Co-starring Nathan Lane as the King.  Remake an old Broadway staple, and add a washed-up television star for name recognition.  Bingo!
EQUUS!  The Musical!  The all-singing, all-dancing version of the famous stage play starring the young Daniel Radcliffe, in a reprise of his role.  All the fun of the original stage drama, with music and dancing!  Features such toe-tappers as "Bad Career Choice?" and that show-stopper "Ha-Ha!".  Co-starring Nathan Lane as the Doctor.
Hairspray, the Musical based on the Movie of the Musical based on the Movie:  Coming almost full circle, the Bard of Baltimore rakes in yet more dough in yet another derivative rendition of his classic film. Starring Nathan Lane, Matthew Broderick, and Kelsey Grammer.
Pirates of the Caribbean, The Musical:  Starring Johnny Depp.  Based on the successful movie franchise, which in turn was based on an amusement park ride.  Includes such numbers as "I wanna be a Pirate!", "Yet Another Sequel?", and "Phoning It In!"
Harry Potter, the Musical:  Cashing in on the lucrative movie franchise, Harry Potter comes to the stage, featuring Matthew Broderick as the young Wizard (Daniel Radcliffe declined the role due to his commitments in EQUUS! The Musical!).  Also co-stars Nathan Lane.
Yet Another British Movie Made Into A Musical:  I can't remember if it was the Full Monte or Billy Elliot or whatever.  Its like a revolving door, sort of.  Take a mildly popular British film and adapt it to a musical.  It writes itself!
Birther of a Nation: A one-man show starring Donald Trump.  Who knew he could tap dance?
Mel Brook's The Producers based on the Movie of the Musical based on the Movie:  As Mel says, why not cash in, yet again?
Spiderman, in Perpetual Previews:  To prevent this show from becoming the largest flop on Broadway, Producers have hit on a novel idea - never actually open the show officially.  After running in previews for five years, the show will shut down without actually ever have officially opened.  While critically panned, audience attendance is high, as everyone wants to see "a real accident".
NASCAR, The Musical:  A combined effort from the Producers of Starlight Express and Lombardi comes a musical designed to appeal to middle America and that all important male demographic.  Actors will appear on roller skates, each playing a different NASCAR vehicle, and will skate out over the audience on the old ramps left over from the Starlight spectacle.  It's not really theater, but then again, we're talking Broadway, here, right?
Wolf in Sheep's Clothing:  The latest musical based on Gregory Maguire's latest book, which is about (surprise!) a fairy tale retold where the good guys are bad guys and the bad guys are just misunderstood.  In Maguire's latest effort, adapted for the stage, he re-tells the story of Little Red Riding hood, only this time from the point of view of the Wolf!  Turns out that Little Red Riding Hood was a vicious little bitch, and the Wolf was an endangered species just trying to get along in the world. "Greatest Musical of the Decade!" gush critics, "A must-see!"  Makes Wicked look lame! 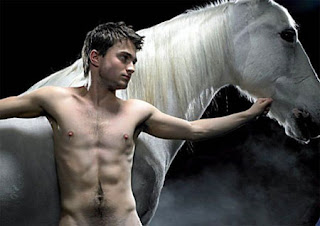 Tough Choice, but EQUUS! The Musical!  It is.
P.S. - I had to actually check to see if Gregory Maguire might have actually written such a book.  Sometimes Parody hits the mark too well.  Whew!  No, not yet!  He's working his way there, though.  Who said successful authors write the same book again and again?
And yes, there is actually a Harry Potter Musical, although it has never seen the light of day....
And OMG, yes, there is a NASCAR, The Musical, as well!  And I thought this shit I was making up was too bizarre to ever be true!
Still no EQUUS! The Musical! - YET!  (wait for it, Broadway eats its young).
No POTC Musical just yet, although you can "like" it on Facebook.  And what's not to like?
Newer Post Older Post Home