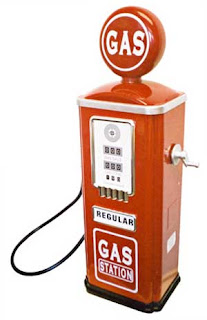 Winn-Dixie, the grocery store, is running one of these "they throw pennies at us, hoping we spend dollars" kind of deals, offering "up to" 50 cents off a gallon on gas, if you buy certain products or certain amounts of products.

The rules of the game are very complex, but if you swipe your loyalty card, your purchases are logged and when you go to the Shell Station, it provides you with a "rebate on gas" of up to 50 cents a gallon.

Now bear in mind that when you buy 10 gallons of gas, this comes to $5, which is not a lot of money, considering the hundreds of dollars you may spend a month at the grocery store.

Why do they do this?  Because people are idiots and rednecks and poor people are obsessed with the price of gas.

Bubba buys a 10 mpg Dodge Ram "Hemi" pickup truck, wastes another $3000 jacking it up and putting loud recap tires on it, and then whines when it only gets 8 mph on the way to work.  Gas is expensive!  Dang!

The idea that he could drive a Chevy Colbalt to his job at the widget factory is beyond him.  After all, maybe once a year he might "need" to go deer hunting, or go offroad or drive on the beach at Daytona.

Actually, the truck is just a way of overcompensating for his tiny penis and his feeling of utter helplessness in a modern technological society that seems frighteningly complex and scary.  So he overcompensates by subscribing to the Culture of Belligerence, by acting tough and driving a loud obnoxious pickup truck, and basically hating anyone with a modicum of intelligence.

Yes, he is the profile Sarah Palin voter.  They love her - she is "one of them".

The point is, Bubba is obsessed about the price of gas, and will drive all over town for a 5 cents a gallon discount.  So waving 50 cents a gallon in his face is like waving a red flag in front of an angry bull.  He will charge at that.

Now, if you are astute, you might think, "Gee, why should the sale of my groceries be tied into the sale of another, unrelated commodity" - and that is good thinking.

The answer is simple - the more complicated you can make any financial transaction, the easier it is to fleece the consumer.  So you dangle this "free gas" deal out there and people are mesmerized by it, because, anything to do with gasoline is like, well, catnip to a kitty.

And they stop checking prices at the Winn-Dixie and stop cross-shopping at other stores, such as Wal-Mart, and pretty soon, they are paying $10, $20, maybe $50 more a month for groceries, all to get $5 or $10 off on gasoline.

It is, in short, no bargain.  No bargain at all.

And what is really annoying is that if you planned on shopping there anyway, you feel obligated to participate in these complex games, or otherwise you are leaving money on the table.

We were loyal Wal-Mart shoppers, until recently.  The local Wal-Mart has had a complete turnover in management staff, and the store is dirty and understocked.  Entire sections of shelves are barren.   You can't shop there if you wanted to - the things you want to buy are gone.  And the place is dirty and nasty and there are abandoned cars accumulating the in parking lot.

Plus, Mark is working next door to the Winn Dixie on St. Simons, so it is about 10 miles closer to go there than to drive to Wal-Mart.  So right off the bat, at 20 mpg, you save about $2.50 in gas by going to Winn-Dixie.

But the prices are slightly higher than Wal-Mart.  But they have the shelves stocked and what we want in stock, and for the most part, the quality is far higher.

So, we probably would shop there anyway.  And it is annoying to have to screw around with this "50 cents off a gallon" nonsense.  But they do it because Shell wants your business and Winn Dixie wants your business, and before you know it, you are saying "Well, I need a quart of milk, I'll go to the Winn Dixie, because I get money off on gas" - and you drive by a store to go there.  Or you need gas, and you drive out of your way to go to Shell to get gas, because of these "rewards".

Suddenly, you've stopped making strategic purchases, but instead have pledged loyalty to certain retailers.  And of course, that is what they are hoping you will do!

We are monitoring our spending on groceries - down to the penny - every month.  So if we see a rise in food costs, and they fire the manager at Wal-Mart and tow away the junked cars (and clean the place, for chrissakes!) we might end up going back there.

In the meantime, these complex "throwing pennies at us" deals just annoy the snot out of me!
Newer Post Older Post Home