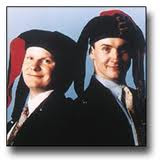 These two are pathetic.


I recently received a SPAM e-mail from The Motley Fool.  The Motley Fool is a relic of the go-go 1990's and gave such stellar advice like "invest" and "buy stocks" - because back then, anyone who invested made money and stocks just kept going up, up, up!

But again, never confuse getting lucky with being brilliant, and even though a broken clock is right twice a day, that still doesn't make it a good clock.

And the way they pitch their wares - or whatever the fuck it is they are selling, because you can never tell what it is they want from you, other than your money - is to use fear tactics.

A portion of the e-mail is excerpted below.  I would include the whole thing, but why bother?  It goes on for several pages without saying anything at all, other than to induce a vague anxiety in the reader.

The premise of this e-mail (and most of their e-mails) is this:

1.  Horrible things are happening shortly.   What they are exactly is not said outright, but they quote other people and "credentialed" sources (Wired magazine?) as hinting at the same things.

2.  You should invest in... well, what they don't say. These great investments will be "revealed below" but are never explicitly stated.  Presumably you pay money and they tell you all these fantastic "secrets" that the "big boys" know.

3.  They say totally contradictory things - the "Great Selloff of 2011!" is going to occur - and yet all the smart players right now are BUYING other companies.  Which is it?

The e-mail has all the charm of a carnival barker and all the confidence of a snake-oil salesmen.

The upshot is, this is a lot of blithering nonsense.  It is hype and fear wrapped up in a bunch of gobbledygook, and if you buy into it, you have no one else to blame but yourself.

If someone can't tell you in 10 words or less what they are getting at, chances are, they are trying to deceive you.  The Motley Fools go on for page after page without saying anything at all.

And they love to use HUGE FONTS and Exclamation Points!!!!! which is always the sign of sound financial advice.

These folks telegraph up front what serious thinkers they are - with their jester hats.  My advice would be to walk away from them - if in not fact run away - as quickly as possible.

The source Wired magazine praises for its "sharp, up-to-the-minute financial advice" and The Economist hails as "an ethical oasis" urges you to get the full story on:

It's already started... and by the time everything is said and done, as much as $3.3 TRILLION will have changed hands.

Telecom giants... private equity powerhouses... Nasdaq... and even Warren Buffett are all taking immediate steps to ensure they come out on top...

And now you can, too -- by simply moving your money into investments with the 3 crucial characteristics revealed below before it's too late.

On March 9, 2009, two monumental things happened...
Stocks finally stopped falling -- and an even more perfect storm began brewing.
At first, the only ones talking about this inevitable economic event were a handful of business school professors and some old-school equity analysts.
But then companies like Google, Kraft, and even ExxonMobil began moving some major money around -- and suddenly everyone from Barron's to The New York Times was cranking out headlines about it.
You've probably seen your fair share of them. But, even so, you may not realize that over just the past few months, this storm has grown $717 BILLION stronger -- and now it looks like things are finally going to come to a head...
In fact, Bloomberg reports that the last time we saw cash flowing out of companies this fast was just before the collapse of Lehman Brothers...
The Associated Press notes that in the 58 years the Federal Reserve has tracked corporate cash reserves, U.S. businesses have never been faced with a capital imbalance this large...
And CNNMoney.com says we're on pace to see all-time selling records shattered.

But things aren't going to play out like you probably think they will...