What the Heck is "Cloud Computing", anyway? 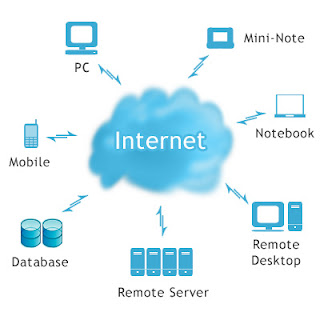 Cloud Computing derives its name from the symbol used in most PowerPoint presentations to represent the Internet.  Chances are, you are already using forms of Cloud Computing.  And chances are, you will use more, as time progresses.
"Cloud Computing" is one of the buzzwords being bandied about these days, and many folks have no idea what it means.  To some extent, it is just a name for a trend that is occurring already, and to some extent, it is just the latest attempt at "Thin Client" computing, which has been tried several times in the past.  But unlike past attempts, Cloud Computing may be the ultimate "Thin Client".

What is "Thin Client"?  Well, in the old days, all computers were "Thin Client" based.  Massive hulking mainframe computers were safely tucked away in computer rooms, while users accessed them using dumb terminals, such as the old VT-50 and VT-100s or teletype machines - which were a legacy from the Western Union telegraph era.  Yes, there was a connection between dot-dash and dot-com.

The PC era changed all that, as computers moved to the desktop.  While this provided some liberation from the tyranny of the mainframe, it meant that all of us had to become computer experts.  It also meant that for a typical office, huge expenses were needed to supply everyone with a computer.  Recall that in 1985, an IBM PC-XT with an EGA display, 64K of memory and a 5 MB hard drive could cost $1500 to $2000.  Multiply that times 30-50 people in a small law firm, and we are talking hundreds of thousands of dollars in expenses, plus the need to hire someone to maintain all these machines, install and upgrade software, etc.

And then there is the issue of backing up files and even finding files when distributed over 50 different PCs.  It was an expensive nightmare.  So central servers and networking was developed, and some folks tried to use "thin client" PCs back then, which had little more than an operating system, no hard drive, and basically ran all their software off the network.  Much easier to administrate, cheaper to install, but a nightmare if the server ever went down.

Cheap hard drives and PCs basically killed off the thin client model over time.  Today, we maintain separate copies of operating systems and software on each computer in an office.  And while we may store documents on a central server, many other files end up distributed among the dozens, if not hundreds, of PCs in any given organization.  And of course, the "IT Guy" has to run around maintaining all these computers, which are prone to breaking (and losing all a user's work) if they crash.

So the idea of "thin client" is still appealing, in some regards.

In the early days of the Internet, chances are, you ran most of your applications on your PC.  If you wanted e-mail, you loaded Microsoft Outlook and then set up your account with a POP server, to download your e-mail.

Today, you can access e-mail online using one of  a number of free e-mail sites, such as Yahoo, Hotmail, or Gmail.  All you need is a computer with an operating system and a browser - and it really makes little difference what operating system you are using or what browser.  You are basically "O/S Agnostic" which scares the shit out of Microsoft.

But more and more "applications" are moving online as well.  For example, 10 years ago, if you wanted to use Turbotax, you bought the program at Staples around tax time, installed the discs (how quaint!) on your PC, and then "ran the program" to do your taxes.

Today, you can go online to Turbotax.com and run the same program right from their website, without having to "buy" the program.  However, once you file, you may have to pay processing fees.

Today, there is a lot of buzz about "Cloud Computing" and already some folks are dismissing it as a trendy catchphrase.

But chances are, you are already doing a lot of computing in the "Cloud" and you can, as an individual, utilize some existing "Cloud" features, for free.  Right Now.

Google Docs, for example, allows you to create documents, including text, spreadsheet, presentations, and even drawings, using their website.  No software to download or install, and it is platform agnostic.  You can store these documents online, and access them from any computer - or allow others selective or group access to them - effectively sharing documents online.

Google's Gmail interacts with Google Docs, so that you can view and store attachments you receive by e-mail in Google Docs.

Accounting software is also moving online.  Quickbooks is moving online with its programming, which will make it easier to access data and also avoid those pesky upgrades.  Of course, they are using a subscription model to sell their service, and this could backfire on them.  Many folks, including myself, balk at the idea of paying again and again for the same piece of software.

And of course, these are just a few examples, of "Cloud" applications - there are hundreds more.

What is the downside to "Cloud Computing"?  While the technique is largely platform (O/S and browser) agnostic, it does require a connection to the Internet.  If you do not have access to the Internet, you have no access to your data.  So, if you are traveling, you can't work on a "Cloud" based document unless you are connected to the "Cloud" (Internet).

There are some software applications that do selectively and intelligently download your data to your laptop or computer, so that you can have access to "cached" data and synchronize this with data in the "cloud" - allowing you to edit a document locally and then upload it to the cloud later on.  But this does defeat one advantage of Cloud Computing - it now requires you to install and load software locally on your PC as well has have sufficient storage for all your data.

Cloud computing could see a resurgence of the "thin client" model.  Drive-less computers, running UNIX and some simple browser, could access any type of program online, without the need for complicated and esoteric (and unstable) operating systems or being beholden to one O/S or company.

Which is why Microsoft is nervous about the "Cloud" and, as with everything else, after denouncing it, are trying to "own it".  Cloud computing could be very profitable for business applications, where, as noted above, you have to pay for hundreds of computers in a company - if not thousands.  Simple, cheap "thin client" solid-state computers (with no drives and a hardwired O/S) would boot up instantly, and run their applications from the Internet or other network.  It would save a lot of money in terms of hardware, and also in terms of maintenance as well (think of all those hard drives you DON'T have to format - and all the boot sector viruses you don't have to deal with).

But, alas, I think like with many other "thin client" applications, the cost of hard drives and computers will continue to fall to be competitive with Cloud applications.  The Cloud will have a lot of uses for most of us, but I suspect it may not supplant the PC entirely.  Just yet.
Newer Post Older Post Home