Running Out of Money in Retirement 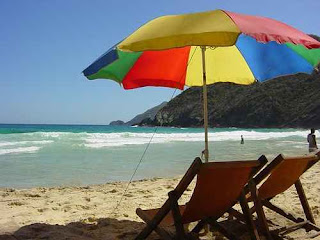 We all dream of a retirement like this, but if you run out of money, it won't happen.

There are two sides to the 401(k) situation that are stressful for the average Joe Citizen.  First, we have to put our money aside during our working career and save for retirement.  This is stressful enough, as you never are sure you are putting enough away, and the temptation to spend is always there.  And then, of course, there are disruptions in the market, such as we saw two years ago, which are enough to give anyone a heart attack.

But assuming you survive all that, and retire with a modicum of Social Security and some money in an IRA or 401(k) are you in the clear?

You see, since you have no idea how long you will live, and what possible future expenses you will have (or what the rate of returns on your investments will be or whether inflation will skyrocket) you basically have no idea how much to spend every year, without either running out of money or ending up with too much left over.

And if you run out, well, then you have to try to get by on just Social Security, which is not easy to do in this day and age.  You might be able to get by paying the grocery bill and the rent - barely.  But if your car breaks down or your house needs a roof, well, forget it.  And of course, that means the lazy days at the beach resort, or all those places you wanted to travel to are right out of the picture.

And I've seen this happen, too.  Seniors spend their money in retirement faster than they anticipate - usually by living a lifestyle "too large" for their savings.  Within a few years, their money runs out and their health is failing.  They try to get by on Social Security alone, which is a struggle.  When unexpected expenses pop up, they put them on a credit card, which slowly accumulates debt over time.  If they miss a payment, their rate is jacked to an unpayable 25% or more - which means they will never, over their lifetime, get out of debt.  And their "golden years" instead of being a time of rest, relaxation and no stress, end up as a time of penury, worry, and depression.

So how do you avoid such a fiasco?  Good question, and I wish I had a good answer, other than to save more and spend less.

The 4% rule, which I have discussed here previously, is one good "rule of thumb" that might help in managing your post-work finances.  And today, it is possible you may live for 20-30 years or more after you retire - particularly if you end up retiring in your 50's - which many of us do, and not by choice.

In order for us to retire on any sort of income at all, Uncle Sam forces us to become Millionaires.  And very damn few of us are Millionaires.

And this illustrates exactly how lucrative those "defined benefit pension plans" were, back in the day.

One approach to managing this risk is to buy an Annuity - which may pay more per month than you might take out using the 4% rule.  This Annuity calculator, for example, illustrates a MetLife Annuity and how much it would pay out, at a minimum (guaranteed) and for various rates of return (that annuity is variable).  This Annuity Calculator from Fidelity is also useful as well.

However, after playing with that Annuity Calculator, I am not sure it is such a great bargain - or that it would ameliorate risk.  For example, if I crank in a sum of one million dollars, and my age as 65 and the payout to begin immediately, the amount it returns if $4167 a month, or a neat $50,000.00 a year - 5% of the balance.  Some financial advisers say that using a 5% rule is a safe withdrawal rate for many folks (and my scenarios with the 4% rule confirm this).

So I am not sure that buying that MetLife Annuity is such a screaming bargain.  You give them all your money, and they give you back an income stream that you could realize from your money - leaving no lump sum to access for emergencies or nothing to leave to your heirs.  And moreover, you are not dependent on the solvency of MetLife for your retirement.

I hope to explore Annuities in more detail in a future posting.  I have discussed these in the past, and as "reverse life-insurance policies" they have the same problems life insurance has - there is an overhead involved with the company wanting to take a profit out of your money.  You may be spreading risk, but you are doing so at a cost.

So how do you avoid running out of money at retirement?  Well, the first thing is to SAVE MORE than you are.  You can't be too thin, too good looking, or too rich.  And yet, many people think it is possible to be too rich.  During their working lives - or even in retirement, they squander thousands of dollars a year, doing the various knuckle-headed things I have detailed in this blog - leasing new cars, cable TV, and other unnecessary things.

But others will squander even more, trying to be "nice" to others - paying off your child's car loans or credit card debts, co-signing loans, or otherwise giving away your cash.  These may sound like altruistic things to do, but if you are short-changing yourself in the process, is it really such a good thing to do?  You have an obligation to take care of yourself in our society, and it is not "selfish" to fulfill your part of the unwritten social contract.

But for many folks in this country, who are not financially astute (most people), they think that anything more than a couple thousand dollars in the bank is "a lot of money" and wonder why their "rich parents" won't buy them a new car or pay off their credit card (I'm not kidding, people have queried that to get to this site - "How do I get Dad to stop being so stingy and buy me a new car?").

Worse yet, a lot of retirees succumb to the urge to meddle in their adult children's lives and do stupid things like buy them a new car - without thinking through whether that money will be needed later on in retirement.  And later on in life, when they need that money, they can't get it back.