Is Rock and Roll Dead? Was it Ever Alive? 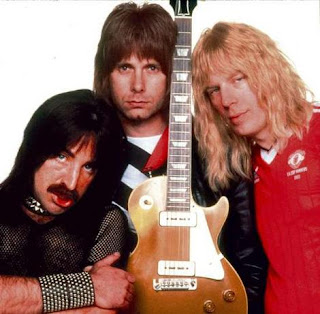 Sneer for the camera, boys!  Time for the album photo!  Spinal Tap so successfully parodied Rock and Roll (and in particular, Heavy Metal) music that many people thought it was a real band.  And the band actually toured in response to the demand!  In Rock and Roll, truth is stranger than fiction.

Was Rock and Roll a symbol of rebellion, or just another chance for large corporations to market to the affluent youth market?  As I get older and look back, I am inclined to think the latter.

When I was a kid, we would go down to the drugstore (or the record store - remember those?) and look for Rock and Roll albums to buy.  And back then, all the bands looked pretty much the same - scruffy beards and mustaches, long hair, and hippie clothes.  And they would be posed on the album cover, glaring at the camera, as if the photographer has just pissed them off.

(Album Cover - an interesting thought.  The Cassette and then the CD shrank this to small proportions. Today, iPods show a postage stamp of the album art.   It is hard to sell a big attitude in a small format!)

And of course, all of this was by design - posturing was a big part of Rock and Roll, selling the attitude as well as the music.  So Elvis was all about the curled lip and the swinging hips and smoldering sexuality as much as it was about the music - much of which was covers of R&B tunes done better by more obscure Black people.  But that latter effect is, of course, the dirty little secret of the Rock and Roll business.

And the Beatles?  Well, when they first appeared on the Ed Sullivan show, you could not hear the music for the screaming bobby-soxers.  It was an odd phenomenon - the screaming was more important than the music, and let's face it, "I wanna hold your hand" was probably best when you couldn't hear it for the screams.

This is not to say that they were not talented musicians - or that any Rock act lacked talent.  Only that what we bought (and were sold) was often the album art, the back-stories on the band and its members, the attitude of rebellion, and, well, everything - and incidentally the music.

And the music business, as I have written about before, was a big business.  Talent scouts would go out and seek out new talent, which would then be groomed, and recordings made, with heavy over-dubbing and production values, such as Phil Spector's famous "Wall of Sound."

And then they would market the snot out of the music, usually using Payola to get it played on the air (Payola was outlawed, which had the record companies stymied, until they discovered that most disc jockeys had an appetite for cocaine).  And by packaging and selling the act, they could make a lot of money.

And so, a lot of forgettable bands came and went, singing their rebellious songs, or their ballads of how hard life "on the road" as a Rock and Roll star was, or whatever.  And most of them didn't make much for their efforts - although the record companies did.

And we, as kids, lined up to be exploited - to buy "our music" which we thought was a product of our generation, and not a neatly packaged and marketed product created by middle-aged men in conference rooms and targeted toward us like a bullet.  We convinced ourselves that we liked the music, after hearing it on the radio, and thought that buying the album was an original idea of our own - and not the result of Pavlovian training.

Of course, sometimes those bands had nasty ideas of their own - that they were artists and should keep their own money.  And if a band became too successful, they might have leverage against the record company.  A sudden plane crash or drug overdose was often a Godsend for the record companies, who would make more money after a star died, than they would in life.  It worked for Elvis, it worked for Michael Jackson.

Some producers came up with the idea of creating bands from whole cloth.  It is a compelling product to sell.  Young men in their late teens and early 20's are attractive to all people of all genders and ages.  Who doesn't want to see some hunky 22-year old sing a love ballad on the TeeVee?  It is a product we all want to buy.  So why mess around scouting for talent or waiting for teenagers to form a garage band, when you can create one of your own?

So The Monkees were formed, which lead, later on, to the boy-band phenomenon.  And meanwhile, in Motown, R&B groups were created at each recording session, as contract players were brought together and records made - not by bands, but by producers.  It was a product, made on an assembly line, which is appropriate for the formerly titled "Motor City".

Hyped groups like "Def Leppard" and "Grand Funk Railroad" were little more than mediocre bands that benefited from the heavy promotion of the record companies - and prove that with enough marketing, you can sell ice to Eskimos.

But, wait, you say, what about the artistry and songwriting of the performer?  What of it?  In many cases, the songwriters cranked out tunes back in the day and then sold them to the performers, who then claimed to have written and arranged them, and thus took credit (and collected royalties) for them.  But in many instances, the "singer/songwriter" ends up, after closer examination, to be little more than a front man, or mannequin, sometimes barely a singer.

Today, the classic Rock and Roll group is pretty much dead, replaced by the Rap artist, the Heavy Metal Band, and the Grunge Performer.  And in all three cases, once again, it is the posturing and attitude we are sold, not necessarily the music.  A rap "artist" can't be successful unless he has run-ins with the law, or is involved in a shooting (again, the record companies benefit from the untimely death of Snook-Snookie-Dogg or whatever, making more money after his "untimely demise" than before).

The heavy metal bands are all about attitude and power chords, which sound more like industrial noises than music.  Having worked in factories for much of my young life, the sound of a power-grinder or a transformer catching fire has no appeal to me as music.    And of course, the emo "Grunge" bands sell the teenagers on the idea that it is OK to sit at home and smoke pot, wear a ski-hat in the summer, and fell sorry for yourself.

As Lisa Simpson famously said, "Making teenagers depressed is like shooting fish in a barrel".

But I suspect that the kids of today won't be fondly listening to Curt Cobain or Rappy the Rap Star on the "Oldies 100" station when they are 50.  There end up being albums in your collection that, later on in life, you wonder why you bothered listening to in the first place.  The Talking Heads, for example, were all the new-age rage back in the late 1980's.  Today, I can barely listen to them.  They sold attitude, not music.

So, is Rock and Roll dead?  Was it ever alive?  Or were we just deluding ourselves, as kids, that we were being "rebellious" by listening to music that was carefully created, packaged and marketed to us as "rebellious music, 3 for a dollar"?

Today, of course, the Internet has changed things.  And to some extent, this has loosened the grip of the Record "Industry" (as it likes to call itself, not "Artistry") on the music business.  Today, a garage band can form and publish its music online for anyone to download.

And not surprisingly, no one really cares.  Because when you get right down to it, the musical talents of most teenagers is not all that great.  And the great insights they have into life in their lyrics are, well, that of a teenager.  Without the compelling album art and the back-stories and the marketing, they just don't seem so damn important anymore.

And maybe this is a good thing.  Stripping away the commercial veneer of the "Music Industry" and examining the real talent on its merits reveals that a lot of what we thought was talent was actually celebrity (like Madonna, for example).  People selling their image more than their art (like Andy Warhol, for example).

When you strip away the marketing and puffery, all you are left with is the talent, which has to stand on its own.  And this is a good thing.