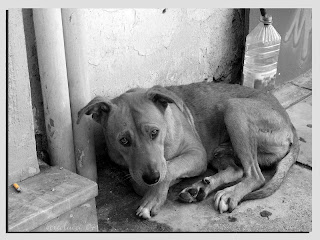 Some people - and animals - develop a condition known as  "learned helplessness " where they take no action to help themselves, even when they can.  Instead, they just curl up into a ball and whimper.


Learned Helplessness is an interesting phenomenon, and I mentioned this before with regard to Passive-Aggressive behavior. And in the USA, it is an epidemic.  In part, I think this is because we live in a technologically complex society, where the average person owns tens of thousands of dollars of equipment - from computers, to cars, to HVAC systems, to appliances, to cell phones, most of which is microprocessor controlled.

And to most of these folks, it might as well be magic - they are like savages in a Cargo Cult, scratching their heads to understand these artifacts of the Geek Gods.

How does this flaccid acceptance of defeat become ingrained into human beings so early in life?  Why is it that we throw up our hands in despair when some piece of equipment in our life breaks or the credit card bill comes?  I think if you look at the animal experiments involving Learned Helplessness, you may see a clue.

In one  experiment, three groups of dogs were placed in harnesses. Group One dogs were simply put in the harnesses for a period of time and later released.  Groups Two and Three consisted of "yoked pairs."  A dog in Group 2 would be intentionally subjected to pain by being given electric shocks, which the dog could end by pressing a lever.  A Group 3 dog was wired in parallel with a Group 2 dog, receiving shocks of identical intensity and duration, but his lever didn't stop the electric shocks. To a dog in Group 3, it seemed that the shock ended at random, because it was his paired dog in Group 2 that was causing it to stop. For Group 3 dogs, the shock was apparently "inescapable." Group 1 and Group 2 dogs quickly recovered from the experience, but Group 3 dogs learned to be helpless, and exhibited symptoms similar to chronic clinical depression.

This is an interesting insight, I think, into human behavior.  When nothing you do seems to change your environment - when you push the levers in life and nothing seems to happen and the bad things that happen in your life appear to just be random shit that rains down from the sky, well, you get depressed.  And you learn helplessness.

Among poor people, this seems to be common.  Many poor folks describe how money flows in their lives as though it were a natural phenomenon (instead of an invention of mankind).  Some days it rains buckets (but not often), most days, it is a long drought.  The idea that you can control the weather, to some extent, is alien to them.  And usually their attempts at moving the levers lead to more shocks, so they just let them go.

Similarly, with technology, people have no clue as to why things break - or how they work in the first place.  They only know that technological things are "expensive" and when they break, it is "bad".  And oddly enough, rather than limit the amount of technology they own, such folks are usually the first to go out and buy some gizmo or gimcrack and scratch their heads in wonder when none of it works.

Education in math and science in this country lags behind most of the Western world.  Today, you can skip math class after 9th grade in most High Schools.  Few "native born"  Americans choose to study science, engineering, technology, mathematics, or any "hard" or difficult courses.  However, our Colleges and Universities churn out reams of psychology, history, anthropology, communications, and arts students - most of whom graduate from College knowing little more about the real world they will have to live in, than when they started.

And if I was prone to conspiracy theories, I might be inclined to think that this learned helplessness is no accident in our society - that the television teaches us to be passive and helpless and to "leave it to the experts "  as depressed people make excellent consumers.  The last thing our Corporate Overlords want, is for us to be self-actualizing.  But fortunately, I am not prone to conspiracy theories.

And I can say, that even as an Engineer, I did not receive much training in the handling of money.  To me (and to most Engineers I knew and know) money was a mystery, and once we made "good salaries" in Engineering, we went out and squandered it in short order.  It was only in studying the law that I got an inkling of what I really needed to know to take control of my life - and only in running my own businesses that I had the hard lessons that taught me how to push those levers in the right direction to make the money flow, even during a drought.

And I was fortunate in that not only was I an Engineer, but also a laboratory technician, and thus learned a lot of "hands on" knowledge on everything from wiring high voltage panels, to building and programming computers - from using machine tools, to welding steel.  Many Engineers graduate from College with great theoretical skills, but little in the way of hands-on skills.  They may be able to design a circuit, but they can't solder worth a damn.

And damn few Engineers know how to write - or even type, for that matter.

And perhaps that is a problem endemic to our society - specialization.  We are taught from birth to pick a specialty in life to learn - a narrow area of expertise, where we will be highly skilled, but highly ignorant of the rest of the world.  So most of us stumble through life, not quite understanding most of what is going on.  And we feel helpless, because nothing we seem to do makes one goddam difference in our own lives, much less in the overall picture of things.

But of course, that is just a perception, not reality.  Your very existence on the planet changes the world, and things you do - and more importantly the things you fail to do - make a big difference in your life, even if you don't see the cause-effect relationship.

Depression sets in when you start to feel helpless and say "what's the point?  I push these damn levers all day long and still get shocked!".

And sometimes, the best cure for this is to do something where your actions do produce a result.  When you create something, fix something, write something, do something, your brain realizes that the environment can be controlled - to some extent - in response to your actions.  And at that point, you start grasping the levers of life and stop curling up in the corner and whimpering.
Newer Post Older Post Home