Why "This Old House" is Evil 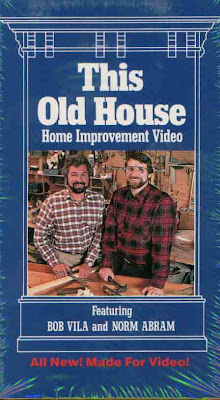 This television program has done more to ruin the psyche of American homeowners than any one single thing.  These two are indirectly responsible for the economic meltdown of 2009, I believe.

As I have noted before, public broadcasting is very suspect, and nowhere is this more true than the television series This Old House.   As I noted in The Paraphernalia Generation, our generation is very well kitted-out, and everything we do has to be over the top, whether it is our pot pipes, our coffee makers, our cars, our boats, or our houses.

And in the late 1970's, hippies morphed into Yuppies and started getting jobs, settling down, and buying older homes in the cities where they were living.  And after a few bong hits, they thought, "Gee, let's re-do all the funky woodwork in this old house" - and the home restoration mania started.

This Old House went on the air in 1979 and started selling the idea of restoring older homes.  While it was an interesting program at first, like so much else on television - even or especially public broadcasting - it morphed into little more than advertisements for "underwriters" - the sponsors of the programs.

So, early on, "sweat equity" was out, and "leave it to the experts" was in.  And of course, the experts usually recommended installing things sold by the sponsors of the show.  Bob Villa ran into trouble early on, when he tried to parlay his participation in the show into some commercial gigs for a local chain of home improvement centers - angering Home Depot, one of the shows "underwriters" (sponsors).

They don't take advertisements on PBS, of course, right?  Everyone knows that.  But you don't piss off the sponsors, just like regular TeeVee.  And yes, I am just kidding in that first sentence.  PBS takes a LOT of money from sponsors - they don't really need your tote bag pledges.

This Old House went on to tout a number of home improvements of dubious or limited merit.  While restoring an old home is a great thing, for most middle-class Americans, it is an unaffordable nightmare.  And some of the improvements touted are very complex solutions to simple problems.

For example, radiant heat and hydronic heating are routinely touted on the show, which is a staggeringly expensive way to heat a home.  Engineered Hardwood floors were oohed and aaaahed over, but no one bothered to mention what happens when you get them even a little bit wet.  Things like stainless steel appliances, granite counter-tops and other "upscale" accoutrements were also touted as "must-have" items.  And most of these are pure ego, pure status, not practical or necessary improvements.

Unlike our parent's generation, the home was no longer just a place to live, but was to become a showplace to flaunt our apparent wealth, often at great personal expense to ourselves and by taking on huge debts.  (In early shows, they often mentioned this - with the unhappy homeowner admitting that the rehabilitation costs were nearly double or triple the initial estimates.   Later on, this was not talked about as much.)

For most of us, however, a house is just a place to live - not some showplace.  And few of us live in antique homes which merit such restoration efforts.  I know that I fell into the "This Old House" trap, at least initially, as an impressionable youth.

When we bought our home at 8033 Washington Road, it was a tract home - a ranch house from 1949, built inexpensively during the post-war boom.  We should have realized that the home was just that - rather than trying to make it more than it was.  As it was, the home was bulldozed in 2005 to make room for two new homes.  It was hardly worthy of restoration - it was hardly built to begin with.

We initially installed a storm door, and listening to the boobs at "This Old House", we thought that a "real" wooden storm door - the "old fashioned kind" was the way to go.  But what we quickly realized was that wood rots, sags, and continually needs painting.  It swells, too, and as a result, the fitting of the door changes with the seasons.  Such a door might be appropriate in an historic building in Old Town Alexandria, but it was just an expensive waste of money in a tract home in Hollin Hall Village.  When it rotted off a few years later, we bought a nice insulated aluminum storm door that worked 1000 times better and never needed painting, adjustment or anything for more than a decade.

Similarly, we fell for the argument that only "real wood" windows - preferably Pella or Anderson - was the way to go in replacing our aging, rusting, steel-frame casement windows.  What we realized quickly was that such windows were horribly expensive and difficult to install.

We finally wised up and realized that cheap vinyl replacement windows work great, cost little, and never need painting.  And for a non-historic home, they are definitely the way to go.  Our ancestors spend countless hours painting and repainting siding, doors, and windows.  You may think vinyl siding is tacky, but it is cheap to buy, easy to install, and lasts decades with little maintenance other than occasional washing.  Paint, on the other hand, starts to peel within a year or two, even for a "properly" done job (which isn't cheap).

Of course, the major fallacy that the show promotes is that you can fix up an old house and make money at it - or at least break even.  But the reality of "home improvement" is otherwise.  For every dollar you plow into a house, you might get back 50 cents in immediate resale value increase - if that.   And this is particularly true if you have to hire people to do every bit of work.  Sometimes it is cheaper to just move, rather than try to remodel.

But of course, we all took the bait, hook, line and sinker, and by the 1990's, nearly everyone of my generation had bought into the home-as-nest-and-status-symbol way of thinking, and the home improvement bandwagon had taken off, with full steam.  We laughed at our parents and the older generation, who were content to just live in a home as it was, without feeling the need to periodically tear it apart.  What were they thinking?  That outdated wallpaper!  That old kitchen!  It all needed to be torn out and done over!

But then the recession came, and the "look at me!" houses with their horrendous mortgage payments started being foreclosed upon.  Marriages broke up over the staggering costs of home remodeling and decorating.  Now is a good time to pick up one of these dinosaurs for cheap - if the previous owner didn't smash all the granite counter-tops in a fit of pique.

What we realize, in this new era, is that "Norm" and "Steve" were selling us the false God of consumerism.  Remodeling a house isn't some sort of treat, but an expensive and inconvenient nightmare.  And no matter how nice a job you do, chances are, for every dollar you put into a house like that, you will be lucky to get 50 cents back.  You'd better love that new kitchen and bath, because it cost you a lot of money - out of your retirement savings.

And after five years, that "real wood" siding and "real wood" windows and "real wood" doors will all need to be scraped and repainted, if not replaced.   You might as well hire a handyman permanently to keep the place up.

A house is just a house.  And on any given block, the spread in price between the fanciest remodeled house and the most run-down fixer-upper, isn't that big.  Throwing a lot of money at a house often doesn't result in accomplishing anything, other than to stoke your ego.

And when it is all said and done, it is just a house.  A home is a psychological thing, not a physical one.  A Real Estate Agent may claim to be selling homes, but they sell only houses - you make them into a home.

And owning things is not an end in and of itself - particularly when you are dead broke most of the time because you are mortgage stressed and house-poor.

For me, I would rather do things than own things.  It is tempting to want to "fix up" a house and throw money at it.  But in the long run, it really doesn't accomplish much, unless you enjoy the process and enjoy using the space.

If you have a functional, usable kitchen and bathroom, leave them alone.  Sometimes you can "make over" a room for not a lot of money, as opposed to ripping everything out and starting over.  For example, we re-did this kitchen in New York for not a lot of dough.  We thought, briefly, about the granite counter-top thing - after all, that was a "must have" item, right?  But as it turns out, the real value of the home depended on its size (number of bedrooms) and location, not the countertops and appliances.

Location determines value, not content.  If there are no affluent buyers in your neighborhood (no jobs, for example) you can improve a home all you want - no one will be able to afford to pay you much for the improvements.

On the other hand, a well-maintained home in a good neighborhood will always command a good price, even if the kitchen and bath are a bit "dated".

Doing things is better than owning things.    Owning a nice kitchen might be fun, for ten minutes or so, but really isn't an end in and of itself.
Newer Post Older Post Home