Hobby Car on a Budget 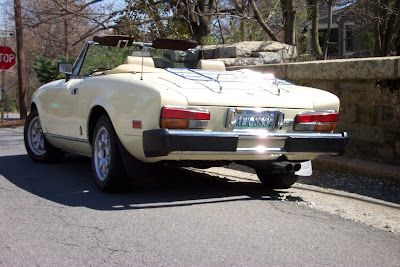 
We all like to have our hobbies.  And as I noted in Hobbies Run Amok, it is all-too-possible to take a hobby "too far" and end up squandering a lot of money.  Over the years, I have had a number of "hobby cars" which were mostly inexpensive, interesting used cars, that I bought cheaply, tinkered with, and drove for a number of years before selling.  Such cars can be a lot of joy for the shade-tree mechanic, and also provide an inexpensive an interesting second form of transportation.

The key is not to take it a step too far, or buy more car than your income can afford.  And another key is to keep a budget for the hobby car - and make a game out of restoring and repairing the vehicle while not going overboard.

Antique and classic cars are generally out of reach of most amateur car restorers.  If you are an average suburban Joe, chances are, restoring a classic Bentley is beyond your pocketbook and tool skills.  But there are a lot of cars out there that are at an age where they can be bought cheaply, and while requiring a lot of work, can be repaired cheaply as well.

There is a magic moment in the life-cycle of a car, usually just before the 20-year mark, where the manufacturer no longer supports the car, and the aftermarket sees a drop in demand for parts.  At this point, a lot of parts are "dumped" on the market, and you can find used parts for such cars fairly cheaply.  And since the cars are near the end of their design life, they are worth little as well.  If you can find an example in fairly good condition, you may be able to fix it up fairly inexpensively.

But the key word here is inexpensively.  And if you want to have a hobby car, you need to have a garage and tools and the know-how to work on it.  Buying older cars and then parking them in your back yard and thinking about working on them is not being a "hobbyist" but merely a hoarder.  Or buying an older clapped-out car and trying to "fix it up" when you have no skills, tools, or garage space to work on it, is a recipe for disaster.

You can't own a hobby car while living in an apartment.  Your landlord will be on your case about that "old junker" in the parking lot, leaving oil stains.   And chances are, you won't be allowed to work on the car in the parking lot, either (and doing so will not make you many friends).

At that stage in your life - living in an apartment - you should be thinking about saving money, not spending it.  And yet, I saw firsthand, when I was younger, many people do just that - make half-hearted and ill-fated attempts at "restoring" and old car in the parking lot of their apartment complex.  It just can't be done, really.

I had fun with my hobby cars, and for the most part, while they were a time drain, in terms of real cost, they were not so bad.  Compared to the thousands of dollars I lost in depreciation on new or newer cars, they actually cost little.


But I also put a lot of work into them, which meant a lot of time.  And you have to be handy with tools to own older cars.  It literally would bankrupt you to try to pay someone to fix up such cars.  So leave the handyman's specials to the handymen, if you are not handy.


Why did I sell the cars?  Well, despite all the work I did on them, like anything else, they would continue to need work down the road, over time.  I had my fun, but I didn't want to be "Mr. Fiat" or "Mr. 2002" or "Mr. Mercedes".  And older cars are, well, old.  It might seem romantic to drive an old Chevy around, but they handle worse than today's pickup trucks.


And I had the opportunity to buy a 1999 BMW M Roadster, for about what I got for selling all of those cars.   I realized that as I got older, the amount of energy I would have to restore cars would diminish, and it would be nice to have a car with low miles that I could just drive.  But of course, since buying that car, it has depreciated severely in value (by about $20,000) - which illustrates that an older hobby car can sometimes be a better bet.

What are the hidden gems of today that might make good hobby cars?  Well, the things to look for are a car that they made a few of, for which there are replacement parts readily available.  And finding the type of car that people have fawned over and kept up is also good.  I think if I was in the market for a hobby roadster, an older Miata might not be a bad bet, as they make a lot of aftermarket parts for it, and it is far more reliable than, say, an old MG.  And yet, these older Miatas are easier to work on than the more recent models.

Other Japanese models are less quasi-collectable.  A Honda S2000 is a fascinating car, but not one made in large quantities and still quite expensive for average Joe to buy.

A BMW E30 or E36 or Z3 might be another choice, although the E36 (I had two) is a fairly complex car, and some parts, such as door panels and the like, are very hard to find at any price.  Old E30's on the other hand, are inexpensive cars, easy to work on, fun to drive, and have that old "2002" styling.

Some older Porsches can actually be fairly inexpensive to buy, but don't expect these to become rare collectables.  I would rather find an older air-cooled 911 than mess around with their front-engined nightmares.  But like old BMWs, probably not for the faint of heart.

There are few American cars of fairly recent vintage that are worth restoring.  Most front-wheel-drive GM and Ford platforms are forgettable, disposable cars, even if it is a Bobby Labonte NASCAR commemorative Monte Carlo.  Trucks are sometimes interesting, and parts can be found fairly easily, even for older models.  And even older American trucks can be found fairly cheaply, still in running condition.  I only wish I still had garage space for my cherry 1995 F-150, which I sold on eBay last fall.

Of course, one hobby car isn't a car at all, but a motorcycle.  Many folks are discovering that older Japanese motorcycles can be a very inexpensive hobby.  They can be found for very low prices, and reproduction parts are becoming available.  And they are very easy to work on and take up little garage space.

Hobbies are fun and all, and an inexpensive hobby car can be a good way to put your restless energies to use.  But don't take it a step too far.  Spending tens of thousands of dollars on a toy might seem "affordable" when you are in your 30's and 40's, but most middle-class people, later on in life, you will probably wish you spent less and saved more.  And you can enjoy a hobby car without spending a ton of money on it.  In fact, throwing money at a hobby car is often the least enjoyable thing you can do.
Newer Post Older Post Home