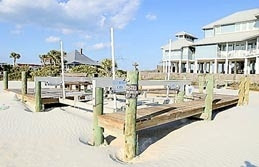 You can be smart about investing, but sometimes things go bad regardless.  Who would have foreseen that a beautiful waterfront home would end up having beaches on both sides of it - within a year?  We are presently staying at the Mellon Lodge, in the left of this picture, a picturesque Florida Cracker House.  Tough Kayaking!

It illustrates how failing to diversify, buying high (and selling low) and buying status items (vacation homes) can backfire for the small investor.

You can't predict the future - that is a given.  And sometimes things work out horribly bad and there is nothing you can do about it.  Diversification is really the only way the small investor can ameliorate losses.

We are presently staying in Summerhaven, a small, older fishing camp community, South of St. Augustine.  We are renting the Mellon's old house (which is still in the family).  It is a cheap rental, and from the photo above, you can see why.  It sits on a river of sand.

In 2002, the house was done over and a beautiful garden installed and a new dock.  It had the beach on one side and the Summerhaven river on the other.  The house, a late 1800's Florida "cracker" house is full of charm and history and was featured in the local papers.

When housing prices went berserk in the 2000's, no doubt the owners felt they were sitting on a gold mine - a picturesque historic house worth well over a million dollars.  And the property taxes were no doubt onerous.

But in 2008, a storm broke through between the ocean and the river, and within two years, the entire river silted up.  And by that, I don't mean it got shallow, but that it is now literally a river of sand.  Brand new boat hoists now rest on sand, and there is no water anywhere.  From deep water dockage to nothing, nearly overnight.

And of course, at the same time, the Real Estate market crashed and crashed hard.  The residents here no doubt wish they sold in 2005 or 2006!  Remodeling efforts from 2002 are starting to show their age.  And as the properties are right on the Ocean, the whole thing is one hurricane away from oblivion.

But this sort of even illustrates how random chance - the will of God or the law of probability, take your pick  - can intervene and cause your best laid plans to gang aft agley.

The 10 examples of "biggest money mistakes" listed in the CNN piece are all examples of where people failed to diversify or put all their eggs in one large investment basket - large for a middle-class investor.

Note the complaint by the one woman who rolled all her money into a fund touted by her insurance agent.  Can you guess which insurance company this was?  Perhaps one that is hyping the snot out of its investment arm?  If you read my blog, you know what my guess is..... I've dealt with those folks before....

No one will feel sorry for you, too, if you lose money by putting it all into one thing.  And especially when it is a luxury like a vacation home.  The Mellons will do OK, although I feel sorry for them not because of finances, but because their family has been coming here all their lives, and to see the river die in a matter of two years must have been heartbreaking.

The optimist in me, however says, "look at the bright side - you have beach on two sides, now!"  And it still is a charming place to stay.  And cheap, too (about $250 a night, five bedrooms).

And some of the neighbors, who build the "look at me" kind of beach houses during the height of the Real Estate madness are no doubt in pain, as not only has the value of their property dropped due to the bubble bursting, but the lack of deep-water dock access really drops the value as well.  The market may recover, but without that dock, the value will never be the same.

And you can't foresee that sort of thing, and likely, insurance doesn't cover it, as even though it was "sudden" it did take a year, and silting up of an adjacent river does not affect the structure of the house itself.

Shit happens, as they say.  Prepare for it.  Plan for it.  Expect it.  Some bad things will happen in your life.  You will die, for example, that is a given.  You will probably get sick, too.  The market will go down, and then up, and then down.  You can't say for sure when, but you can say for sure.
Newer Post Older Post Home