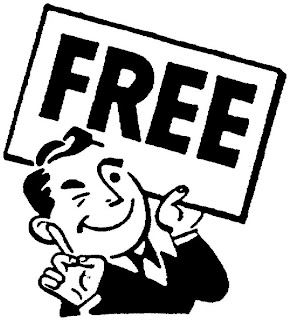 When something is presented to you as being FREE while at the same time you have to buy something else, then it really isn't free.  In commercial transactions, rarely, if ever, is something truly free.

If an article is truly free, usually that means that the cost of disposing of it exceeds its market value - at least to the owner.  So if you have an old sofa that the local hauler wants $50 to dispose of, you might be tempted to put it at the curb with a sign saying "FREE" instead.  And chances are, someone will come take it.

But oddly enough, if you put the same sofa in the paper and asked $50 for it, someone might come and buy it, and pay YOU for the privilege of hauling it to the curb.  When something is truly free, people do not value it - paying for the experience often validates it.  Or as P.T. Barnum once said, "always charges the suckers to get in, they don't value what they don't pay for."

But the reality of FREE is that if some marketable commodity is offered for FREE, then someone will snatch it up in short order, if nothing else but to re-sell it.  So rarely is anything of value given away for free, and when it is, the first person there usually takes it all.

In commercial transactions, FREE is just a means of obscuring price, as in order to get the "FREE" item, you have to make a purchase, which, by definition, means the item is not FREE.  And we are bombarded by FREE all the time.

Free Installation!  Buy One Get One Free!  Free Evaluation! First Month's service FREE!  Free Oil Changes for Life!  Free Gas with every purchase!  Free Cash-Back!  Free Airline Miles! - these are just a few of the "FREE" come-ons we see on a daily basis.  Free items or services that require us to purchase something else to get the FREE item.

But of course, this FREE nonsense is just price obfuscation.  The more complicated you can make any transaction, the easier it is to fleece the consumer.  And consumers fall for FREE like salivating dogs.

Simply stated, none of these items are truly FREE, but rather the cost of the FREE item is just folded into the cost of the item you are paying for.  Or put another way, they take the overall cost of both items and then attach that number to the single item, and then just tell you the other is FREE.   Nothing is really free, of course, but then again, you knew that.

For example, take the "Buy One Get One Free" gag.  Publix likes to use this tactic, which insiders call the "BOGO".  Are these really bargains?  Of course not, but to even tell, you'd have to either have a panoply of commodity prices memorized, or do research on retail price numbers - research that is difficult, if not impossible to do.

Go ahead, try it.  Finding in-store prices for groceries on the Internet is nearly impossible.  So how we determine what a 'bargain' is, often depends on our memory about prices.  We may remember prices on staples and items we buy a lot of, but for many items, we tend to look at store prices and the the mark-down as a "bargain".

With the BOGO, the price is effectively marked-down 50%.  You are not getting anything for free.   At best, you are getting something for "half price".  But is this half the market price, or half the retailer's suggested "normal" price point, the latter of which of course, is an artificial number.  The retailer makes money on these deals, or at least recoups their cost in a number of ways:

1.  Most retail products are marked up as much as 100% from wholesale cost.  So offering two-for-one is basically selling at cost, not at a loss.

2.  Manufacturers may provide incentives to move product.  Coca-Cola and Pepsi are always on sale at "ridiculously" low prices in the grocery stores because the bottlers offer huge incentives to the grocers.  So the "BOGO" Coke offer, selling two six-packs of Coke for $3.99 may still be profitable for the grocer.  That does not, of course, make buying soda-pop healthy or a good food bargain for the consumer.

3.  The grocer is hoping - almost sure in fact - that you will buy more stuff besides the BOGO items, and he will make his profits on those items.

So the grocery store is not really "giving away" food for free, and you still end up leaving the store having spent money - usually more than you anticipated - and you don't come out "ahead" or get anything for FREE.  In fact, the BOGO just acts as a means of promoting consumption, and chances are, if you saw the BOGO in the store (as opposed to seeing it online and going to the store for the express purpose of buying it) you bought the BOGO as an impulse purchase.

And as we know, buying something you had no intention of buying or do not need, just because it is a perceived "bargain" is no bargain at all, just an impetus for over-consumption.

And yet, FREE is wildly popular and very, very powerful.  We all react to it, and we all get snared by it.

As I noted in my Winn-Dixie posting, they had a series of the oddest FREE promotions I ever ran into.  And perhaps they lost money on them, I don't know.

One promotion was "Everyone Gets Breakfast!" and if you bought four boxes of cereal (or oatmeal) you would get a gallon of milk, a quart of orange juice, a pound of Folger's Coffee, and a dozen in-store glazed donuts.  We were told this was $14 worth of products, for FREE!

And of course, like a sucker, I went around and scooped up all the stuff.  Oatmeal kind of grows on you, you know, after a while.  And perhaps that was the point of the promotion - and the company selling the cereal/oatmeal perhaps subsidized the promotion).  And of course, we left the store having spent more than $100 on groceries, which at even a nominal mark-up, recouped the $14 of "free" groceries (actual cost to the retailer, $7).  So the retailer made money, and the customer thinks he is getting a bargain.

But in terms of a basic transaction, I prefer the simpler pricing schemes of Wal-Mart.  Unfortunately, the Wal-Mart store in Brunswick is a dirty, poorly stocked, and poorly managed nightmare that is no fun to shop in (as opposed to, say, the immaculate SuperCenter near the Airport in Jacksonville).  So my motivation to shop at Winn-Dixie is not just price-based, but quality and selection based.  A store with bare shelves is no longer a store, except in the Soviet Union (do you hear that, Wal-Mart?).

The simplest transaction is the best and most direct - and allows you the consumer to do a real calculation of prices, without having to do a lot of math.  If a can of beans is 79 cents, that is the price.  But a BOGO at $1.59 - is that a better deal?  (No, actually).  Or if the beans are 89 cents, but if you buy $100 of groceries they will give you $5 off on your next fill-up at the gas station, is that a better deal? (No, in fact, worse than the BOGO).  Or suppose the can of beans is 99 cents but they give you free airline miles, so if you buy 10,000 cans of beans, you get a free flight to Kalamazoo? (probably the worst deal of the lot, unless you really, really like beans and have relatives in Kalamazoo).

Once is a great while, yes, they come up with one of these deals where someone gets a great deal on these complicated pricing arrangements, such as the infamous Pudding Guy, who bought cases and cases of pudding to get over 1.3 million airline miles (I hope they don't expire!).  But for the most part, these sorts of deals usually amount to chasing our tails.

And as for the pudding guy, well, the company pays pennies for those miles, so they really aren't out anything on the deal - plus it provided a lot of free publicity.  And as I noted before about airline miles, they can be damned hard to redeem, often have redemption fees, and of course, expire over time.

But the companies like the story about the pudding guy for another reason besides free publicity.  It is like in the Casinos, where someone wins the new Corvette in the progressive slots - it provides the suckers with just enough feedback to think, "Hey, I could win this, too!" - and that keeps them playing the slots.   In a similar way, a story like the pudding guy reinforces the notion that faux financial acumen is the way to financial success - that if you just chase BOGOS, coupons, rebates, and airline miles hard enough, you'll get rich - or something-for-nothing.

Feedback - that is the key.  You see, that is how you train the neural network that is your brain.  You provide a stimulus and then look to see the output, and then you reward or punish (so to speak) with feedback.  Pretty soon, you've "trained" the network to do things, like facial recognition or spotting a Soviet tank.  Whether it is an electronic neural network, or the one in your brain, the deal is the same.

And that's why retailers love FREE, as it sets off an electrical storm in your brain, and you feel "rewarded" for being a "smart shopper" by snatching up these supposed "bargains".

Now, let me anticipate the noisy and tiresome response from the chorus of weak-thinkers out there.  "Well, sometimes you get a good deal with a BOGO!  Sometimes these FREE offers are a good thing!"

Well, duh.  I never said that anything with FREE in it was an utter rip-off all the time, did I?  (No, you, the lazy thinker and lazy reader, who haven't even read this far before firing back a "comment" did that.  If so, please go away).

No, what I am saying is that most of the time, these FREE come-ons are no bargains, more likely than not are bad bargains, and always, always are obscuring the price in your mind, by getting you to think emotionally not logically.  Once they can obscure your mind in the fog of war that is the marketplace battlefield, they can get you to act in a manner that is against your own best interests.

And since the lion's share of people on this planet think emotionally - usually in a knee-jerk fashion - the marketers will continue to pander to their emotional reactions.  This means that you, as the logical consumer, are always going to be in the minority, and most basic purchases in your life will be made more difficult, as you will have to wade through the noise and smoke of marketing to seek out the best bargains for your daily needs.

But like Internet Ads, these sort of come-ons do have a positive value - they act as the police tape around a crime scene, roping off the odious deals and warning you of rip-offs.

The best bargains in life sell themselves - and do not require a lot of hoopla.  The best price on gas is found at the gas station with the lowest price, not the station with the "buy a gallon of gas, get free dishware!" - and even the poorest among us know this.  Seek out simpler and more transparent transactions, and in most cases, they are the best.

And who knows?  If enough of us do this, perhaps the marketers and retailers will stop showering us with coupons and BOGOs and come-ons, and FREE.
Newer Post Older Post Home