Note:  Blogger recently crashed, taking this entry with it, as well as comments.  They may reinstate it, or note.  Fortunately, I saved a copy on my hard drive. 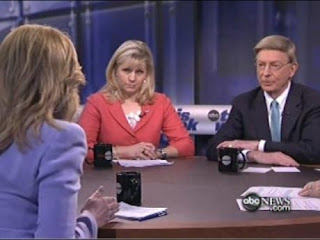 On the TeeVee, usually two opposite viewpoints are presented as equal and opposite in value, both with equal validity.  However, increasingly, rational thinking is being   countered  "  with illogical arguments or jingoism, as if it were a valid counterpoint.
One of the problems with our society today, and with the TeeVee in particular, is that any sort of crazy idea is given equal currency with sound thinking.  And no, I am not talking about shadings of who is right or wrong, but the tendency to paint outright lies as truths, or as "opinions" which must be given careful weight.
Basic logic and truth are getting lost in the process - a process by which a slogan or saying is now considered "deep thought".
For example, take the Gift and Estate tax - sometimes called the "inheritance tax" by some, and the "death tax" by jingoistic sloganeers.  The Gift and Estate tax has been around for decades without much talk or controversy, as for the most part, most middle-class people never pay it.
However, in the last few years, some right-wing pundits have taken on this tax, and have convinced ordinary people that it is some sort of outrage, that will deny them the chance to leave an inheritance to their children.
Now taking aside whether leaving an inheritance is a help or hindrance to your kids (and being raised in many wealthy neighborhoods, I tend to see the latter), is the Gift and Estate tax really going to prevent you from leaving an inheritance?
For most Middle-Class Americans, the answer is, "not really".  You see, there is a $2,000,000 exemption to the tax, which is far more than most people have as an "estate".  For 2010, the law was temporarily repealed, which meant that some Billionaires who died that year were able to transfer their entire estates to their children, tax-free.

In 2011, the tax is slated to kick back in with a $5,000,000 exemption - allowing you to transfer five million dollars to your kids, tax-free.  Considering that there are only a few thousand millionaires in this country that will be affected by this tax in any given year (there are fewer than one million people with net worth over 5 million dollars), this means that few people will ever pay the Gift and Estate tax.  The average working Joe will never see this tax in his lifetime.
But even in the "bad old days" before these limits were raised, the exemption was about $750,000, which for a married couple, could be doubled, meaning that you could leave nearly 1.5 million to your kids, tax-free.
And of course, there were other ways around the Gift and Estate taxes - so-called Crummy Trusts or Generation-Skipping trusts could leave money to your grandchildren, in the millions, largely tax-free.  So the wealthy rarely paid these taxes unless they didn't plan their estates properly or were incredibly wealthy.
So how did the Far Right get small people all fired up over this tax?  Well they convinced them that this tax would somehow affect them, which of course is an outright lie.  And no one called them on this.  It was, after all, an "opinion" which we should give equal weight to.  The IRS code on one side of the debate, made-up numbers on the other - you decide which is right!
The other specious argument made was that somehow farmers would not be able to leave their farms to their kids, and thus the family farm would have to be sold off to pay inheritance taxes.  However, there were exemptions in the tax code specifically for farmers, and thus the argument carried no weight.  And again, most of the people touting the "death tax" argument (angry white men who work in cubicles and drive tiny cars covered with bumper stickers) had little to worry about, as their parents were not farmers.
What makes this phenomenon even more interesting is that it is occurring at a time in our country when news organizations are increasingly becoming more biased.  Fox News, for example, will present a "Fair and Balanced" report where one side's positions are distorted and skewed, while absurdist arguments and slogans are presented as factual.  We provide a fair and balanced view, you decide who's right!
Meanwhile, the other networks, under the rubric of being "neutral", are afraid to call out specious arguments for what they are.  Instead, the networks, when they do take a stand, resort to personal attacks.  So instead of calling out Sarah Palin on some questionable policy choices, Katie Couric quizzes her on what magazines she reads - and the Left applauds as if some great point has been made.  But it hasn't.

All that has been illustrated is that Sarah Palin, as a person, might be an idiot - but that the policy choices she represents are not analyzed at all.  End of life discussions are allowed to be called "Death Panels" and Obama being born in "Keyna" is an "allegation".

Nowhere is this more true than in criminal cases.  A person walks up and shoots a number of people in broad daylight.  There is no question he is the one, as the TeeVee cameras were there and filmed him shooting people, and then the police tackling him.  But the same TeeVee station calls him the "alleged gunman" or "alleged shooter".

What's up with that?  In our country, we are so paranoid about being "fair" that we equivocate when we should not.   There is very little chance the murderer will sue you for not saying "alleged" - when he has been caught on tape doing the crime.  What is the harm in saying he did it?

Language is important, and increasingly, our language says less and less, in terms of communication.  We equivocate, we ameliorate, we hem and haw, and we cover our bets.  We never come right out and say one thing or another.  Are Payday loans a ripoff?  "Well, that depends," we reply, lest we piss-off the Payday loan lobby.  And when we don't come right out and say that 300% interest is a scandal, well, then they win.

Fox News has been getting good ratings because they say outrageous things - many of which are not true.  But in response, the other networks have tried to "play it safe" and are reluctant to challenge craziness on its face.

The Obama "Birther Controversy" (there was never any controversy, words matter) was allowed to fester by the media, as no media outlet was willing to call it for what it was - a paranoid conspiracy theory.  Instead, at best, they would merely say that "experts agree that...." and "let the viewer decide!" in cheery tones.

It was only recently that CNN took an aggressive stance on this and said, in no uncertain terms, that the Birther nonsense was just that - nonsense - without inviting a "counterpoint" opinion to "balance it out."

We have an obligation to the truth, which can be absolute at times, and not tinged with shades of grey.  If we assume that everything is up for discussion, regardless of how absurd the opinion, then nothing is ever fixed, and truth dies a little bit - or a lot.

Truth is Beauty, Beauty Truth, and all ye need know.
UPDATE:  In addition to news shows, even "science" channels, like the Discovery channel, now treat ghost hunting and "the paranormal" as well as UFO sightings as "Science" - often repeating the debunked myths, exaggerations, and outright falsehoods used by followers.  Today, truth is a malleable as a soft banana - and kids watching this stuff come away with the impression that what you believe is more important that what is true.
Newer Post Older Post Home