Why Your Car Won't Last Forever 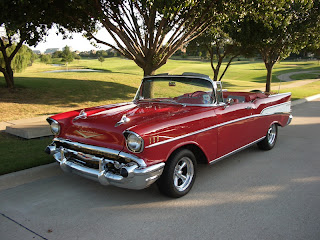 It is easier to restore and rebuild a classic car like this, than one from the more recent past.  In addition to the greater availability of parts for classic cars (as opposed to obsolete cars) is the lack of extensive electronics and   "soft parts "  on cars of this era.  Modern cars, as they age, will be problematic to preserve as classics.
Restoring an old car from the 1950's, 1960's, 1970's and even the 1980's can be a lot of fun.  And it is not hard to do, as for the more popular makes, such as the classic Chevy shown above, an entire industry has sprung up to make "correct" replacement parts - even the hard-to-find trim and interior pieces.

But modern cars?  They will be harder, if not impossible, to restore. Who will make replacement airbags for modern cars, when they become antiques?  What about the esoteric electronics, such as traction control sensors and actuators - or even engine computers?

As I noted in an earlier post, "Try the other key!", BMWs can be programmed for six keys before the memory on the "Immobilizer" module is full and the module needs to be replaced.  When a car is 20 years old, the cost of this part would exceed the value of the vehicle - if you could even find one, as the manufacturer probably won't make one.  And perhaps this is by design - the manufacturer can control how long the cars stay on the road by controlling the availability and price of replacement parts.

Many people are being sold on the idea that a car can go 300,000 miles or more.  And most cars can - provided you drive them 30,000 miles a year and rack up the mileage quickly.  But most cars will hit the junkyard long before the 20 year mark.  Think about it - how many 1991 automobiles do you see still on the road today?  Not many - they are worth pennies, so when they break, they get junked.

Soft parts are another concern.  Older cars were more steel than plastic - you just sanded them and repainted them.  And even the plastic and rubber parts were made from sheet stock.  The Chevy shown above used a roll gasket material for the door and window frames.  To restore these gaskets and keep the water out, all you need is a roll of replacement material and some time on your hands.

Now, take a careful look at the gaskets on your modern car - usually double gaskets at that.  They are shaped and formed to the door frame, not cut from a length of material.  Once the original manufacturer stops making these, who will tool up to make replacements?  Nobody.

Or urethane bumpers, which tend to warp and crack over time.  Who will make a replacement urethane bumper for a 1998 Camry in the year 2030?  Probably no one.  And it is doubtful that someone would spend the money restoring such a car.

Even simple things like carpeting will be impossible to find.  For older cars, you could buy molded carpet sets that were made to fit the car - from J.C. Whitney, even.  But the carpeting in modern cars is a whole different animal.  In my 2002 X5, it is over FOUR INCHES THICK in parts - a complex assembly of carpeting (top layer) molded rubber (middle layer) and Styrofoam portions (bottom layer) very precisely formed to fit over the floor pan as well as wiring ducts and air ducts.  You can't just tack down carpeting when the original gets funky.

Door panels are another issue - over $3000 from the dealer - if you can find it.  I can buy a reproduction door panel for a 66 Chevy for about 1/10th that cost.

For cars made before 1995, even finding refrigerant for the air conditioner is dicey.  And even the gasoline we use today can often corrode the innards of older cars.  Keeping the cars of the 1990's and beyond as antiques will not be easy!  Perhaps as static display models, yes.  But as running cars?  Harder to do.

Perhaps when a 1997 BMW becomes a "classic",  such parts may be available.  But it is hard to say.  Modern cars are built more as transportation appliances.  While someone might collect and restore a 1959 Chevy Impala, no one will bother to do the same with a 2009 Impala.  It just isn't a very interesting car.

So forget about "keeping your car forever" - it just ain't gonna happen on your watch.  If you are an ordinary consumer, buying a late model car, chances are, it will depreciate to the point where it will need a repair - either from a breakdown or an accident - that exceeds the book value of the car.  At that point, the car will go to the junkyard.

And that is why it does not make economic sense to not drive a car.  Cars, especially today, are like fresh fruit.  They go bad even if not driven.   There is no point in keeping a car and not driving it, as it will wear out just sitting, as rubber and plastic bits degrade.  And while a car with "low miles" may be worth more, it is not worth a LOT more than a car with average miles.

So don't keep that modern "Classic" under a car cover.  Drive it to work, use it, and use it up.  Because in your lifetime, it is doubtful it will be an antique or even a classic.
Newer Post Older Post Home