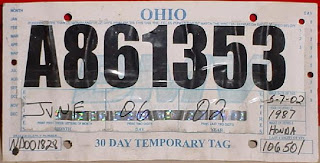 Many car dealers will ofter to slap temp tags on a new car, so you can  "drive it home tonight " even before the deal is consummated and the loan approved.  Never fall for this gag.  It probably is illegal in your State, but dealers do it, anyway.
Back during the go-go 1990's, we set out to buy a new car, which turned out to be a bad idea.  Even using the buyer's club service from our Credit Union, the car was worth about $3000 less the day we bought it, as we drove it off the lot.  New cars depreciate horribly.

And the dealer even tried to play games with the "fixed price" buying club - adding up all the options at full list, while discounting only the base price.  You really have to watch these scumbags like a hawk.  And of course, they wanted to sell us undercoating and paint sealant, and even tried to sell us the floor mats which came standard with the car.  They even tried to argue the remote keyless entry didn't include the key fobs, which they said we would have to pay extra for!  Needless to say, I didn't fall for that, but who needs that sort of sour deal and argument?  Car dealers are lying bastards - what's not to like?

A gag they tried on us, but failed with, was dealer financing.   They told us they could beat the Credit Union financing by a few points, and had us sign a loan application paper.  They said we could drive the car home that night, and the loan would be approved the next day.  However, I read the fine print on the application, and what we had signed obligated us to accept whatever terms the finance company offered, even if they were several points higher than originally promised.

So, of course, the next day, they called and said, "Sorry, but the loan company says your credit is bad (untrue) and they can't offer you the rate we discussed".  So I told them I would bring a cashier's check from my Credit Union when I picked up the car.  They were not happy about that - no doubt they got a kickback from the loan company and were disappointed they were not going to make as much as they first thought.  But since I wisely decided not to "drive the car home" that night, I had them over a barrel.

But others were not so fortunate.  I read one sob story in the Washington Post at about the same time, in some consumer complaint column.  The people went to the car dealer to get a new car.  The salesman showed them one they sort of liked, and then had a mechanic drive away their "trade-in" for evaluation.  They kept the couple there until late at night, taking a $1000 down payment check and never returning their trade-in.

The salesman offered to put temp tags on the new car so they could "drive it home and show it to their friends and neighbors!" (As if that was some sort of big deal) and after signing very similar loan documents to what the car dealer asked me to sign, they did just that.

The next day, they get a call from the salesman.  Same gag, of course, but since they had taken delivery of the car, they were utterly screwed.  "Come on down and sign the NEW loan papers, at 12%" he said, since their credit score was "bad".    They thought about it, and the new loan payments would be too much for their income level.  They said they wanted their old car back, and the salesman said there was no way to do that - it had been wholesaled already.  And since they had driven the new car, it was now a used car and the dealer couldn't take it back.

Now some or all of what this salesman said and did may be misrepresentation and illegal.  But that is beside the point. Once you get stuck in a quagmire like this, your only recourse is to sue, and chances are, you can't afford to spend $20,000 suing a car dealer over a $25,000 car.  And you'd likely lose, too.

So they go back to the dealer and sign the papers, paying over-list for the car, getting less in trade-in than promised, and paying more in interest than expected.  They were utterly hosed.

How do you avoid this scam?  If a car salesman says "I can slap temp tags on this baby and you can drive it home tonight!" you should walk away.  They are using high-pressure sales tactics to get you to sign (and dangling emotional incentives before you).  And chances are, that kind of dealer sells to people who fall for that sort of thing - they aren't interested in selling to rational people, so just walk away from them.

Get your financing in line first with your credit union - or pay cash, which is even better.  And an even better idea, of course, is to find a late model used car from an individual who garage kept it, washed and waxed it and babied it and really likes cars.  You will pay a lot less for such a car, and the negotiation will be a lot more direct - just you and him negotiating on price alone, without ancillary deals like trade-ins, undercoating, and financing thrown in.

Yes, it is a "hassle" - but on the other hand, saving several thousand dollars on a car (likely about 50% of your annual disposable income) makes such a hassle worthwhile.

And if you spend an hour or two, a few nights a week, researching prices and cars online, chances are, you can do pretty well.  It does mean you might miss an episode of Dancing with the Stars, of course.  But we all have sacrifices and choices to make.

You want easy and painless, you pay.  If you want to do the hard thing, you save.  Simple as that.
Newer Post Older Post Home